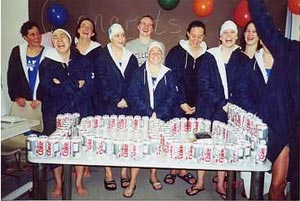 Here is an exclusive picture of the SA victory party. Check out those uniforms! Don't they just scream "winner"?A while ago I made the thoroughly neat announcement that a team of grizzled SA Photoshop veterans were competing in a tournament with a little site called Worth1000.com. When this was announced most people assumed we didn't have a chance in hell, because what does SA do other than create pictures of various things crashing into the WTC or overuse horrible pedophilia jokes? Of course "most people" in this instance refers to the members of Worth1000, who are now wearing their confidence like a pair of underwear pulled all the way over their heads in what can only be referred to as the hydrogen bomb of wedgies. The members of the SA team fought like PCP-fueled Zulu warriors with machine guns for arms, striking fear into the hearts of civilized folk everywhere. I'm not declaring my entire team to be drug crazed savages, no, because they relied on their trademark wit and crazy creativity, which originates from only the sharpest of corrupt minds. Because this tournament was a big deal to, oh, say me, my bookies, and the pride of the entire SA Forums, the combatants turned everything up several notches, and produced some of the most damn awesome images I've ever seen. In the end, when there were just two men left, SA's Stuntcock showed no mercy, and devoured W1K's Furitsu like a delicious ham roasted in the fires of battle. SA was victorious. The war was over.

So what was the image that secured our victory? Take a freaking gander, grandma!

Click here to download a monster high quality (736kb) wallpaper version of that bad boy! I had to shrink the version you see here down a bit so as not to bust our page in half with its supreme coolness. Stuntcock made this amazing piece of work in response to the theme of "Futurama Sports," which is Worth1000's copyright friendly way of speculating on what sports will be like in the distant future. Obviously, this picture murdered in the contest, and like all good killers it got away scot-free!

For those of you just learning about this, our little shindig was done tournament style, with eight competitors from each side. The first three rounds consisted of intra-site fighting. That is, SA members took on SA members, and W1K took on W1K members. This was done for a couple reasons, namely we were using W1K's existing tournament system and we didn't want to run the risk of having one site get eliminated before the final round. I have the utmost confidence in SA, but even I didn't want to risk the embarrassing situation of watching two people from W1K fight it out in the last round while we stewed in a the pot of defeat. Regardless, this way worked just fine, and things had a happy ending. Well, okay, maybe just a happy ending for us.

This picture was taken at the Worth1000 party. Just kidding, I found it by searching Google for "boring loser party."I'm not going to go over the round by round details and images, since you can view those here, but I would like to take this time to offer thanks to the team. Stuntcock, SenatorASSFACE, Vedman, Darthphunk, ToiletDuk, RipVTide, Rivetz, and NoneMoreNegative, you guys are pure awesome. And though they are my sworn enemy, I would also like to thank the competitors at Worth1000. Without you, this would have been one very frustrating and anticlimactic tournament. You guys brought some great images to the table, and a strong sense of closure when we smashed that table over your head. To be perfectly unbiased, competing in something like this isn't easy. Having to come up with outstanding images round after round with varying themes is one of the hardest things to do. I seriously doubt there were any entries that took less than three hours to make, and many that stretched to upwards of six hours or more construction time. These people, regardless of site affiliation, are extremely talented and clever people. Oh, and definite big thanks to Worth1000 admins JaxomLOTUS and Silken Fairy for keeping things in a forward moving direction and being so swell. I have the utmost respect for Worth1000, even if they did get beat by lousy Something Awful, a site that was in turn defeated by lowly Fark.com, which rests somewhere below the bottom of the barrel.

The results of this tournament didn't shock me, but how we all got there did. Going in, I wasn't entirely sure what to expect from anybody in the tournament, but everybody surprised me like an unsanctioned birthday party. I knew I had a good team on my hands that was more than capable of producing high quality comedy with voluminous amounts of gusto, but I had no idea how they would hold up to Worth1000's team, since those guys tended to have a reputation for being "serious" and "thorough." There are a lot of other harsh words I could use to describe them, but they all paint the same picture: these folks like to take time making very polished and technically amazing pictures. What delighted me was that the goon team was more than capable of rising to the occasion, making sure to compliment their humorous and witty images with excellent workmanship. The skill divide that so many people worried about, including myself, proved to be inconsequential. There was also the worry of the style clash. SA tends to be about comedy while Worth tends to be more about technical finesse. However, the results showed a pretty even mixture of comedy and craft all across the board, so again, this was a pretty evenhanded competition.

The good news is that we all had a fun time. People were able to appreciate images on both sides, and the voting was quite fair and honest. While there was some minor culture clash, the spirit of the tournament was a very strong poltergeist more than capable of subduing any negativity. There are already plans for another tournament, and with more of a team-based style. In other words, site on site combat from the get go. There is also the delightful possibility of more than just two sites going at it at once, which sounds pretty damn fun. Seeing how much of a pleasure this tournament was to watch, I can't wait. Look for that in the summer! Once again, congratulations to Stuntcock and to all the other participants for kicking ass and showing the world what quality photoshopping is all about!

We Got Meat! Fresh Meat!

Hey kids and lonely adult posing as kids in chatrooms! It's Ben "Greasnin" Platt here with another movie review. This time around, I took a look at "Meat Market," which, oddly enough, does not feature any actual meat or a market of any kind. However, it certainly does have lots of zombies in cages! It should be called "Zombie Zoo." Dear God, I'm funny.

The opening montage sets the pace for the rest of the movie, assuming you consider "Hey look, we're in a city" to be a pace. We see a bloody body laying on the ground, then cut to someone eating a chicken drumstick -- I mean, human limb. No wait, I mean chicken drumstick. There's an awful lot of flesh-eating in this movie, and poultry with food coloring stands in for body parts for the close-ups. You get used to it pretty quickly, right around the moment when you finally accept that this movie is terrible. A man and a disgustingly fat blond girl run from a bunch of lumbering guys in suits in the distance. Although we can't see their makeup, we can tell that they men in suits are zombies. It's a rule of thumb in the horror movie industry that if you're wearing a suit and you're lumbering, you must be the walking dead. Despite the fact that the two humans are running at top speed and the zombies are staggering roughly one step every forty-five seconds, the dapper undead manage to catch the guy. As for Blubberella, Queen of Pudding, she jiggles as fast as the congealed lard-logs she calls legs can carry her into a nearby parking garage.

There's plenty more where that came from, and portions of it are actually funny! Don't believe me? Then see for yourself, ass!