Tuesday, Nov 22, 2011 by Jon "@fart" Hendren (@fart)
The wiki "Public Domain Super Heroes" is a database of comic book characters that are exactly that. Some are extremely old and discontinued characters from former publishers, while others are "open source projects" that allow anyone to contribute to help the character develop. Whatever the case, they are all in the public domain for one reason or another, and regular folks like you and I are encouraged to write adventures for these forgotten heroes. Having browsed the site for a while, my favorite superhero so far is Battle-Cry, who appeared in only one comic book: Outworlder #1, which is also its rarest and only issue. From the website:

Battle-Cry is an "Open-Source Character" and may be used by anyone. The only rule about using him is that your work must have this notation: "The character of Battle-Cry is available for use by anyone, with only one condition. This paragraph must be included in any publication involving Battle-Cry, in order that others may use this property as they wish. All rights reversed." 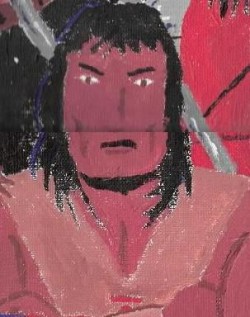 "Let me munch on your pits, dude. I want to go wild on those bad boys before we teach these thugs a lesson." -Battle-Cry's first words

During his adolescence, Battle-Cry's mother was in the hospital for an infection where they learned it would be necessary to amputate her leg at the upper thigh. Battle-Cry's ancient intuition told him his mother would be okay, so he naturally did not appear to show very much concern for her health. He asked the doctor if there would be any way to keep the bones and smoke weed out of them. This misunderstanding of his abilities by his own family would be one of the primary causes of his self-imposed exile from the community of his birth.

Another cause of his nomadic lifestyle is his propensity for abusing his pits. Most of his powers would become apparent when he removes his shirt and begins slapping, licking, and nibbling his pits while inhaling loudly through his teeth between the licks. Most friends and enemies find this process disgusting and difficult to observe, but he loves it and can't get enough.

Though he is called Battle-Cry, his vocalizations during combat are more of a scream. Typically, when his pits are fully pleasured, his screams are at their most powerful. He tends to growl in his sleep as a kind of low scream. This often gets him in trouble on high-profile stakeouts, and his love life also suffers. He is completely hairless below the waist.

Due to the screaming he does all the time, Battle-Cry's rump almost never fully closes. He asked for help online with it once. He has to take stool hardeners nonstop because any poops that are not rock solid will come out when he laughs, coughs, or walks around. He went to a restaurant with some friends and when he stood up he left small poops behind. One of the other guests picked one up in a bag and secretly put it in Battle-Cry's glovebox. His dependence on stool medicine is one of his only weaknesses. Battle-Cry hates crime.

This is only the beginning - I anticipate a rich future full of Battle-Cry stories, books, and movies. Because it's open source, we can all help weave this beautiful tapestry of the poorly-drawn guy who loves pits!