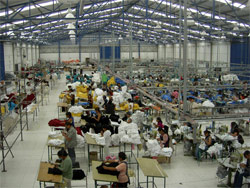 "We have three lines," Stan explained. "You'll be working on the C-line."

He pointed to a side of the factory we had not yet explored. The lights in that part of the factory flickered. There were fewer workers and those that stood at the stations seemed sapped of energy.

"What does it make?" I asked as we walked past a stack of Boggle sets.

My coworkers were Alejandro, Bug, Chris Clark, and The Knife. Alejandro was borderline retarded and he smelled like peanut butter. The other three claimed to be members of a gang called Dick Tracy and they took their names from the TV show The Untouchables. 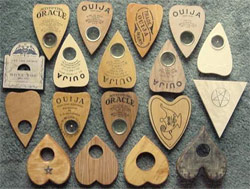 Their gang leader called himself Robert Stack and drank beers and ate enchiladas all day at a bar. At night they planned bank robberies. I once asked Bug how many banks they robbed and he looked down at his fingers, held up three, and then revised that down to zero.

The work was tiring, not because any one thing was physically exhausting, but because you were doing so many things all day long that you didn't normally do. The main movement for me was bending down and twisting sideways at the same time. This allowed me to scoot bad Ouija planchettes into a side chute as they descended into their bagging funnel. It took about ten minutes of this before my back and side began to hurt.

I complained to Chris Clark, the guy at the station immediately next to mine. He was a swarthy young man from El Salavador. He had three tear drop tattoos on his cheek and he wore shockingly blue contact lenses. His job was to slide a thin rulebook and a bagged planchette into each cardboard insert that whizzed past on his conveyor. The Ouija boards were heat-etched wood, as opposed to cardboard, and were added in the last step.

"I can sell you peels," Chris Clark offered when I complained.

He showed me a handful of yellow caplets. They looked like Tylenols, but they had a frowning red face printed on the pill. I refused.

Other than bank robberies and women, and Alejandro's favorite topic of turtles, the men of Dick Tracy liked to gossip about the victims of the hungry ghosts. They did most of this gossiping in Spanish, which I barely understood. Occasionally, Alejandro or Chris Clark would translate an interesting tidbit.

"The ghost curse his mule and he hate heem," Chris Clark explained late in the afternoon. "He was a priest and the mule hate heem."

"His donkey hates him?" 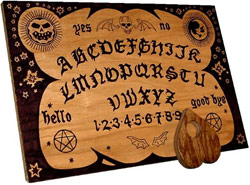 "hAte heem," he explained and then snapped at me with his teeth.

That night I shared a beer with Stan Drummer at the one bar in town, Taberna del Demonio. It was built inside a rusty DC-10 strung with festival lights. The bar sold beers and a brackish homemade liquor called Aguardiente that was served in tamarind jelly jars and topped with three droplets of pepper sauce. These fiery drinks were popular with the men of Dick Tracy. They had to work quickly to catch up with their wasted boss.

"Why the mountains?" I asked Stan. "I mean, you can make Boggle in Tijuana."

"We do," he said. "We make the Chinese version of Boggle here. But that's just filler work. Most of the villagers refuse to help on C-line, which is why we're here."