People Who Email Me Are Jerks 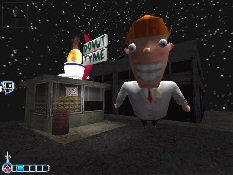 EAT AT JESUS'S!Hello, folks! Zack is currently sailing the wild seas far away from his home, and I have been asked to guard the front page and make sure no one TPs it while he’s gone. My last frontpage adventure dealt with the horrible creations that are a precursor to an unforgivable career in the budget videogame industry, and almost every article I’ve written for SA deals with my personal experience with the tragic fruits of these people’s highly retarded labor. This update covers the little-known secret third option: budget games that I have absolutely no personal experience with because I wouldn’t touch them with my dead grandfather’s rotting arm.

In case you’re wondering what this has to do with the article title, it’s that the majority of games readers tell me I should try are, by sheer coincidence, games that I am determined to never ever try in my entire life. I suppose it’s good that they’re trying to get me to warn people not to purchase these games, and I’m sure these readers’ hearts are in the right places, especially when they end their messages with cheery afternotes like “ppps. HAHAHAH you cant gamble in america! (cept in vegas) THAT SUX!!!” But sometimes it seems that the people who email me these games are crossing the fine line between “doing it on behalf of gamers everywhere”, as they often say, and “doing it because I personally hate Taylor “Psychosis” Bell and want him to die.” I would share a bunch of these games but, going through my mailbox, I managed to find exactly two games people recommended me that had some sort of beta or demo available that would allow you all to experience two potentially SA-caliber games firsthand without the use of an intermediary. For maximum comedic potential, I recommend trying both of these games out for yourself while I point at you and laugh. 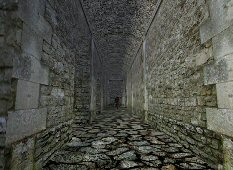 Magic and adventure totally fucking abound in Mourning!Just in case you thought the market wasn’t quite saturated enough with games whose sole goal is to run around clicking on the same monster 400 times just to watch a bunch of numbers in a database slowly increase, then here comes one more! Mourning will allow you to “Enter a forgotten realm where magic and adventure abound!” You get to choose a race (human, elf, dwarf or orc) and learn crafting and join guilds! It’s basically the most generic MMORPG known to mankind, except that after 500 hours of playtime, your character will suffer “perma death” and be erased. That’s right, you get to spend hour after hour after hour plodding through a levelling grind and collecting stupid-looking armor, only to have all your work wiped out and have to start all over as your dead character’s child! What a deal! I guess they’re banking on the fact that no one’s ever going to complain about this feature, since that would require you to admit you had actually sat down and played this game for five hundred hours.

I would never review this game because I hate supporting shovelware MMORPG companies with my money. I’ll never quite forgive myself for paying for a month of Ragnarok Online about a year ago just so I could review it. I’ll also never quite forgive the person who tried to trick me into signing up for it. I knew something was wrong right away from his friendly greeting and the not-too-encouraging ending to his message, which were “Sup fuckface” and “ENJOY, ahahahahahahahahaha”, respectively.

Christian games don’t exactly have a successful track record in the video game industry, especially games with descriptions like this.

Just in case you were thinking this was a "normal" game, it ain't! So forget about dungeons, demons with 17 horns and muscle bound heros. In this game you must fight your way through 7 churches. Each church has its own set of bad guys and there are some fun weapons to play with, they all look like hood ornaments off of cars from the '50s with hot rod flames on them. Your ammo is junk food like donuts, cookies and cake. The health is coffee.

Oh, those wacky Christians! What will they do next? I guess this game is on the right track, since the only known fun Christian game in existence is Bible Adventures, and that’s only because you can feed Baby Moses to a spider and chuck Noah’s animals off a cliff. Donuts and coffee just might be the missing element to an exciting biblical gaming experience!

I encourage anyone interested in the Rev7 experience to check out the screenshots section, as it is undoubtedly the most awesome screenshots section known to man. I couldn’t possibly review this game because it’s impossible for the in-motion game engine to do justice to the sheer amount of quality that oozes out of each and every one of those screenshots. Hey, for all I know it might be a great game, but I’m sure as hell not going to play it to find out, despite the request of the jerk who emailed it to me. Even top-notch character design like this can’t sucker me in. 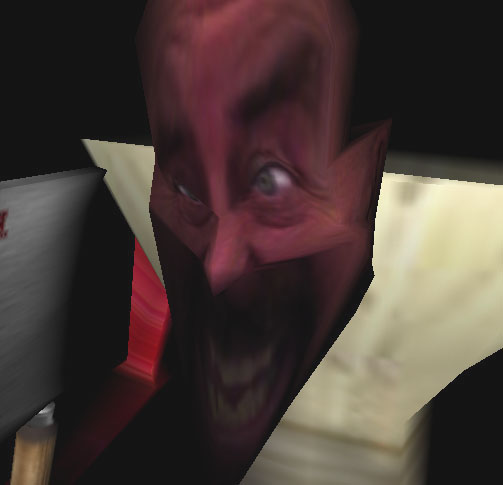 My commitment to not playing this game is that deep.

If you’ve managed to get all the way through this shitty update and you still feel like sending in a game you’d like to see reviewed, have at it! Plenty of people who email me are not jerks, but far too many of them try to trick me into playing a game that I can’t review! To sum up, a game must 1) not be an MMORPG and 2) not have awesome screenshots. If you’re generous enough to tell me to play a terrible game and man enough to follow those two rules, you can hopefully avoid jerking the place up and together we can build a better tomorrow.