The Beard That Should Not Be 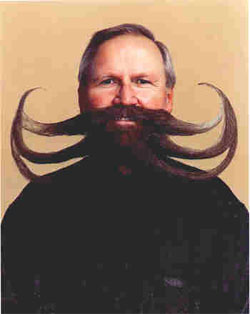 This is your world champion. He doesn't look so tough.The road to the World Beard and Moustache Championships is long and winding, paved with human hair and slicked with a rich coating of gel. The competitors are fierce, sacrificing their bodies and minds in a desperate attempt to groom the most mesmerizing beard possible. The month is January, and though the competition does not take place until October, there is no doubt that many have already been training for years. The six-pronged bearded Willi Chevalier, current world champion, is probably training at least three hours a day to get his beard in prime competition shape. Let's face it, when you want to get in shape for a beard and moustache championship, there is always room to grow.

With just about eight months to go until this sacred tournament gets under way in Germany, only a fool would throw his hat into the competition on such short notice. Well, only a fool or someone with a winning strategy. Ladies and gentlemen, I have a winning strategy, and I'm throwing my hat into the hairy ring, hopefully winning a carnival prize for my efforts. It occurred to me the other day that, through the simple act of not shaving ever again, I could theoretically grow an astounding suit of hair armor on my face. In about a month the stunning neckbeard I already provide a home to could turn into a cascading waterfall of hair, and the decrepit stubble on my face could, with a little styling gel and time to grow, be arranged into a glorious citadel complete with flying buttresses and pointed arches. I can already imagine the throngs of gorgeous women lining up for first person perspective tours of my mighty hair heaven. 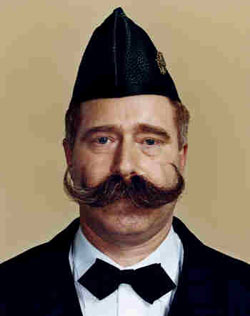 If I didn't know better, Wolfgang Schneider, I'd say you groomed yourself into a corner.My beard trainer, Dr. Tyrese Peppar, wants me out in the field grazing for at least two hours a day. He says I need to think and act like a sheep because they produce incredible amounts of hair. I'm willing to do whatever it takes to mount a strong offense. There is a beard inside my heart, beating like a war drum as its spears grow longer and sharper. Already I can feel raw power coursing through my veins. The hairs of a magnificent beard are flowing through my blood, pushing up towards the surface in order to crown my face.

I won't deny that part of my motivation to compete comes from hearing through the grapevines growing on the office water cooler that fellow writer Reid "Frolixo" Paskiewicz is grooming a beard of his own. Word on the street is that he's got some serious stubble, and that he could potentially turn pro. Let me first say that I respect and admire Reid. He's a wonderful man and a talented dancer, but around these parts he is hardly the Gold Standard of Neckbeards, as Webmaster Beards Monthly once named me. There are also some minor rumors circulating that Zachary "Spokker Jones" Gutierrez might try out too. This kid's got some dangerous cornrows growing on his face, but everyone knows that kind of street beard isn't for show. His heart is as pure as a treasure chest containing a single poison antidote, but his facial hair is so dreadful that looking at it is like being raped by South Dakota's famous Corn Palace and then left for dead. 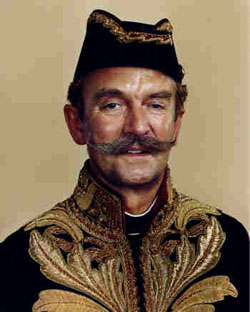 First I'm going to defeat you in the tournament, then I'm going to make you apologize to my grandmother for stealing and wearing her wallpaper.And what about the professional competition I face at the World Beard and Moustache Championships? Looks to me like the shame pathetic schmucks that made the last competition look like a chemotherapy survivors banquet are back and as pathetic as ever. Here's a hint guys: just because you can grow a moustache capable of eviscerating another human being doesn't mean you just grew a piece of art worthy of praise. I look at some of these guys and it makes me sick. Rheinhard Mitterhofer's beard is practically a slap in the face to every decent person out there. His tsunami of hair conjures up frightful memories of the recent tragedy that struck Asia. Herbert Dobner's abomination of beard is no better. His beard looks like some kind of twisted H.R. Giger painting. The hair rains down from his face like a tapestry of cocooned fetuses, each trapped in an endless nightmare. Dobner no doubt gains a psychic energy boost from the torment derived from his tuft. Never let it be said that my facial hair triggers nightmares or tears, unless of course you get too close and the hair touches your sensitive eyeballs. I apologize if that happens.

I have to wonder about the maturity of my competition. Most of these guys are fixated on grooming swords out of their hair. Are they really that childish that all they can think to do is arm their face with a whisker machete? I don't see a deadly weapon forged of facial hair, I see a vulnerable soul trying to keep people away from his face. A Beard and Moustache Championship is about more than just not shaving ever or gelling your hair into a scimitar. It's the crossroads between art and athleticism! As such, the competitors have a responsibility to be creative in a way that evolves the facial hair genre to new heights. How many years is Willi Chevalier going to parade his mandible fur claws around? At a certain point his impressive beard and moustache are going to start looking a tad ridiculous. With these dinosaurs roaming about, I won't have any trouble winning this contest with a well constructed and architecturally stunning beard. I'm going to trim the status quo down to size, grooming a new age of beardom to anchor the future.

Germany should fear me. When I arrive in Berlin it will be like a hair blitzkrieg shaking the foundations of that beautiful city. Not since the end of World War II will they have felt the pangs of such a defeat. My beard is going to be a Dante's Inferno of hair, with swirls that take onlookers deeper and deeper until they confront their greatest fears. There, at the icy core, they will truly know my beard and they will truly fear it. I'm in this to win, and I will do just that.