Pokémon Sun and Moon is the latest game in the popular Pokémon franchise of RPGs. Since it was first teased in a 2016 Nintendo Direct, fans have been clamouring for the new title's release. But is this game a rare shiny, or just a pile of Muk?

Pokémon Sun and Moon feels like the game Pokémon was striving to be since its inception. It's a triumph of game design, 20 years in the making. You walk around in the grass and a little man attacks you. You shoot fire at him, or even water. At the end of the fight, one of the numbers goes up, and you get a high score. I give the base mechanics of this game the classic "Gamer thumbs up".

Unlike previous games in the series, Pokémon Sun and Moon takes place in "Alola", the Pokémon universe's version of Hawaii. This sunny land features sure-to-be-iconic new locations such as Town A and Untitled Lake. "Surf's up" once you encounter Alola's brand new water route, Route 3. Berries can be collected from trees.

Pokémon Sun and Moon features over 100 pokémon, stunningly realized by a guy whose entire job was to open the dictionary to random pages. Remember when there was a pokémon made of garbage named "Garbodor"? Well, now there's a pokémon that's an onion named "Onyun", a pokémon that's a chair called "Reclino", and of course "Garbodor 2", the new evolution of Garbodor that's made of twice as much garbage. Fans of "obtaining all of them" will have their work cut out! But dont worry, you won't be alone on your quest - Pokémon Sun and Moon introduces a special red and white ball that you can throw at things.

Like pikachu? Good news, idiot: There's a ton of those bad boys in here. 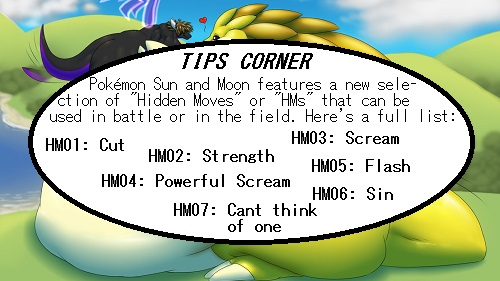 Fun fact about Pokémon Sun and Moon: this is the first pokemon game to NOT be based on a true story. The plot of this game centers around rookie pokémon trainer Your Name Or A Cuss, and their journey to catch some pokémon. However, things are never as simple as they seem, and when a special gem gets stolen you must travel to, depending on which version of the game you're playing, the sun or the moon [Pokémon Sun is vastly shorter than Pokémon Moon]. Along the way you'll meet a cast of colourful characters, and have some ambient turn based RPG gameplay against them.

You don't have to play the game in one sitting because you can save it and continue it later. Also, instead of throwing away your 3DS and buying a new one each time, you can plug it into the wall to charge its battery. Nintendo has done it again.

While it might seem like I have nothing but praise for Pokémon Sun and Moon, there are a few problems. Since this is the first Pokémon game to be released for the 3DS, it's no surprise that Nintendo wanted to showcase some of the 3DS' unique features. But making movement gyro-only is something that should just not happen. We're not in the Wii era anymore, Nintendo - motion gimmicks should stay in the past. Also, I attempted to name my starter pokémon "Christianity", and was informed that that name was prohibited Nintendo's terms of conduct for "offensive content". I'm sorry my faith is so offensive to you, Nintendo. However, these are minor quibbles at best - Pokémon Sun and Moon is definitely one of the best RPGs I've experienced all year, and maybe even one of the best RPGs I've experienced of all time. My devotion is unquestionable. I would die for Sun and Moon, and I would kill for Sun and Moon. I haven't played it