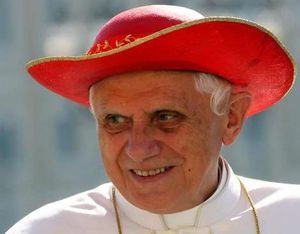 Hey guys, I'm Joshua Taylor. I'm a proud home schooled Christian, and I love my mom and also Jesus. You might remember me from the time I talked about taking drugs with gay devil-worshipping bikers, or from the time I answered people's questions about the world. In any case, why I'm here is the Catholics (like the official head Catholics or whatever) said a few weeks ago that no one is really Christian unless they believe in the pope. It's kind of hard for me to explain 100% cuz I don't really understand weirdos like Catholics, so here's some links that might help: here's a news article (WARNING: ARTICLE PROBABLY FROM LIBERAL MEDIA CONSPIRACY) and here's a guy talking about it on his blog.

Anyway, I thought it was a good time to come back to SomethingAwful and write about this, especially since I already had something written about it. You see, Mr. Harding, my youth minister (and, in three months, my new dad, but he's not my dad, he's my fake dad and I'll never call him dad unless Jesus like takes my body over and makes me say it) had my Christian Youth Group write persuasive essays in response to the pope being wrong. I know that sounds hard, but he gave us a little sheet that had all the parts of a essay on it and you just had to fill it in. So here's my essay. I hope you learn something about yourself and about Jesus and about how the pope is bad.

Dictionary.com defines the pope as "the bishop of Rome as head of the Roman Catholic Church". Jesus Christ defines the pope as "a guy who sucks and is going straight to hell because the pope pretends to talk to Him and tells people at parties that he knows Him when really he doesn't, which is awkward and really rude". I remember one time I told everyone that I knew Brandy Miller and everyone was super impressed because Brandy Miller is a senior and like totally hot if you aren't over picky about faces or skin problems, but anyway she's definitely the hottest in our church's Youth Program and it was so embarrassing when it finally came out that she didn't even know my name or that I existed or even that I was there when she accidentally walked right into me because she was so used to just looking past me.