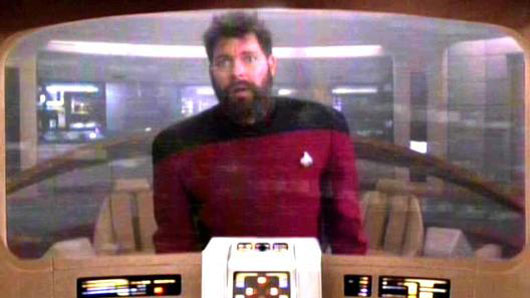 PLEASE NOTE: This record of incidents involving Commander William T. Riker is not a joke and should not be considered funny. There is nothing humorous about his behavior. Starfleet's failure to truly punish his continuing behavior is disgusting and needs to be addressed!

Flinging Bodily Fluids - Received a complaint that the "Jeffries tube was moaning again" and dispatched an engineering team to investigate. The team reported spotting a man draped in a white sheet who shouted, "Space ghost oooh!" and flung "ectoplasm!" at the engineers before disappearing out a hatch. Although the "ghost" was never captured, Commander Riker's uniform was found nearby in the Jeffries tube. 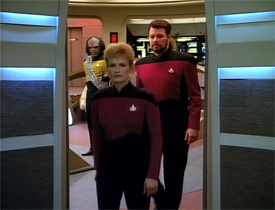 Inappropriate Elevator Action - Received a complaint from a female ensign that while riding the turbolift, a "very senior officer" suspected to be Commander Riker leaned close to her and asked, "Want to see me suck my own hog?" The ensign replied in the negative, to which the officer replied he would "fuckin' do it up anyway" citing "it's a free country" at which point he curled into a ball and "went to town" in the turbolift.

Toilet Impersonation - Received complaints from several crew that a hand-written "out of order" sign had been placed on the door of the Ten Forward women's lavatory and Commander Riker was passing out business cards to every woman in the Enterprise lounge that declared his job to be "Galaxy's Best Human Toilet." His name on the card was listed as "William P. Pissman."

Unwanted Exposure - A complaint was filed against Commander Riker from several crew who were forced to observe a "mating incident" after the trans-dimensional entity Q created a second Riker so that William T. Riker could impregnate himself. Owing to an accelerated gestation, Commander Riker then gave birth via egg to a third version of himself, which grew to adulthood covered in slime and now apparently lives alongside the second Commander Riker with full female reproductive organs in Commander Riker's quarters. When confronted about this living situation, Commander Riker accused security of trying to separate him from his baby, who is adult and bearded and indistinguishable from the original Commander Riker.

Piano Deception - Commander Riker was reprimanded by the captain once again for placing his penis inside something (in this case beneath the keys of a miniature piano) in order to deceive the android Data into stimulating him. When confronted about this, Commander Riker responded, "He's like a washing machine. Who cares?"

Indecent Routine - Requested an ensign join him in the workout room and proceeded to use the leg machine without any pants which, according to the ensign, "showed off everything." When the ensign objected to Commander Riker's routine, the commander apologized and told her he had finished anyway. The leg machine was declared contaminated with biological material and had to be ejected out of the shuttle while in warp transit. When confronted about this incident, Commander Riker demanded to know if he should, "Go back to using the dumbass robot?" 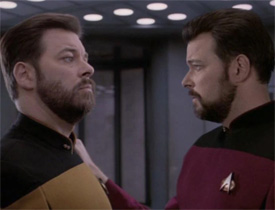 Burger Deception - The Commander Riker with female reproductive organs attempted to place his genitals into a fake hamburger to deceive Commander Data into "tasting that stanky beef." When spotted climbing into a compartment inside a table, Commander Riker stunned several crew with a phaser and declared, "Long live the T-bird!" This version of Commander Riker is at large within the Enterprise and may be carrying more Commander Riker eggs as he was noticeably pregnant. When the real Commander Riker was confronted about this incident, he was wearing a bathrobe and refused to step out of his quarters unless the security detail showed a warrant. He then declared, "That wasn't me. And even if it was, it's a free country."

Unwanted Touching - Commander Riker was ordered off the bridge for taking off Commander Deanna Troi's shoes while she was concentrating on reading the emotions of a nebula and loudly smelling her feet. His claims that he "smelled something wrong" and had to check her were not deemed believable and he was ultimately confined to quarters for 24 hours.

Unauthorized Reproduction - When a fourth and fifth Riker appeared aboard Enterprise, apparently hatched somewhere in the ship, Starfleet Command issued an edict that only one Commander William T. Riker was to be permitted on any ship at a time. This ruling was created specifically for Commander Riker as Starfleet, "Fully understands the possibility of doppelgangers, clones, cyber-duplicates, and holodeck recreations that escape from the holodeck." The other Rikers were all assigned to other ships and stations throughout Startfleet. Commander Riker (apparently the original) was permitted back onto the bridge without further punishment despite repeated protests from other crew.