What if Disney Princesses Were Punisher Skull Decals? 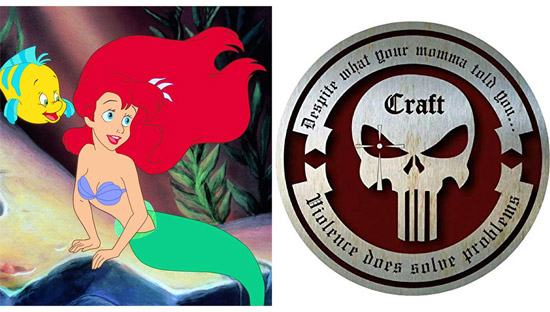 Ready to go "under the sea" and "behind enemy lines"?? Available in 500 count packs from Amazon, these decals include the Craft motto "Despite what your momma told you... Violence does solve problems." RIP Chris Kyle who was shot to death at a shooting range by another soldier with PTSD. Remember him with this skull sticker.

We all know that Belle wanted to support the police and HER President AND vigilante violence all in one decal. Fuck those singing teacups. Go Beastmode on some perps and Make America Great Again.

Colonizers welcome! The Black Panther is a king and a vigilante. All he needs is a skull and he is ready to murk some bodies for the family he lost to crime. Show that your pride has its limits and those limits are the Punisher Skull.

Is Merida Irish? She has red hair and pale skin so she is the Irish Punisher Skull Decal. Let's not complicate things.

Cinderella respects the rules... sort of, just like a cop wearing a Punisher Skull decal and Oakleys when he pulls a black couple over for a broken tail light. Hands where Cinderella can see them. Quit resisting. Quit fucking resisting.

Jasmine is a troop. Respect her and salute her for her bravery. She coats her bullets in bacon grease before dumping mags into Aladdin and the Genie.