Well, well, well. What do we have here, bloody and twitching on the shore of our lovely little island? Looks like a helpless new prisoner. How was the bungee dropoff?

Don't answer. In fact, don't move. You might make Killerbyte nervous. When he gets nervous, people's fingers have a funny way of getting bitten off.

Whatever crime you committed out there doesn't matter. Your past, your life, they're meaningless too. All that matters is you're here now. For good. There are no guards, only ninety three of the most brutal psychopathic criminals this side of the Grand Canyon Mainframe. And my word is law. If you can't follow the rules, you won't survive the week.

First of all, don't even try to dig that tracker out from your shoulder. The pigs buried that bad boy at least a quarter of an inch below the surface of your skin. There's no way that thing's coming out.

Besides, did you know your tracker contains a highly explosive compound? Well it does, and that stuff won't just blow you to pieces if you leave the island. It will also detonate if the tracker senses that it has been removed from your body. There's only a five second window between the tracker's removal and the explosion. That's not enough time to do more than, say, throw the tracker a safe distance away from yourself and dive behind cover. Those fascist bastards thought of everything. 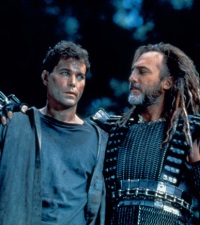 I'm feelin' unusually generous, so let me spare you some heartbreak. Don't try to escape at all. Don't even get your hopes up by thinking about it. If you haven't noticed, just off shore the entire island is surrounded by a fence that protrudes over six feet above the surface of the water. That sucker is high grade chain link. Newest tech on the market. You ever tried to scale a chain link fence? It's impossible. The holes are nowhere near big enough for your feet to find purchase.

Even if you made it past the fence - and you wouldn't - you'd never be able to reach the hovercraft. It's anchored over thirty feet away from the fence. Unless you're some kind of Olympic swimmer, you can't possibly swim that far.

Besides, the hovercraft is constantly manned by a single guard who is always on patrol, with his back to the island because he's only watching out for intruders rather than escapees. Good luck getting past him.

Let's say you somehow removed your tracker, made it over the fence, through the water, and past the guard. The hovercraft's cockpit is locked up tight with a top of the line security system. It's a number pad with a password that's a single digit long. You only have ten failed password attempts before the alarm gets triggered.

I see the gears working in your head. Fine. Ignore my advice. It ain't my funeral. Just don't try to unify the prisoners. Classic mistake. We're all way too different for that to work.

Doctor Scalpyl and his boys are the island's doctors. They're useful, but weak so no one likes them.

Another faction is led by Grip, who used to be a professional climbing instructor on the outside. Specialized in urban climbing - fences and such - but he says he can teach a baby to climb anything. His group is a buncha thrill-seeking wastoids if you ask me. You can usually find them up on the side of a cliff somewhere.

Paddle was an Olympic swimmer. He's always bragging about how him and all his waterlogged followers could tow makeshift rafts full of people for a distance of at least thirty feet. Sure. As if.

Shadow is a loner. A stealth expert, he hunts for our food by sneaking up on animals and breaking their necks with his bare hands. Never says a word to anyone. Total freak.

Then there's Digits. He runs the CyberBoyz, the island's gang of hackers and math experts. Fat lot of good those skills will do them out here.

As you can see, our factions are far too dissimilar to get along. We have no common goal to unify our groups and work together. Face it, pal, you're here for good.