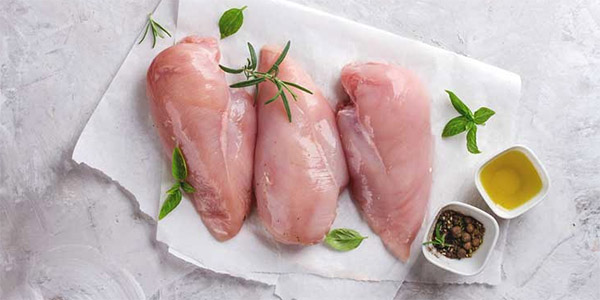 Take a walk through the well-appointed cafeterias within the campuses of Facebook, Google, and other large tech companies, and you might see something strange. Sure, the generous troughs of prime rib sliders, kale salad, and sous vide veal may differ greatly from the brown-bag lunches you're used to, but some of these highly skilled tech workers prefer their food a little more... uncooked. Stroll past any table, and you're more than likely to see a few glistening chicken breasts scattered across the various lunch trays. But it's not just fresh meat: It's also big business.

Raw Chicken is the brainchild of Denis Grangler, who has since changed his name to a long series of unprintable glyphs after a 20-day meditation in his private guru's hot yoga studio. Grangler, riding high from the $500 million sale of WetBd, the world's first "smart waterbed" company, decided to take a sabbatical from his opulent life for a "mental refresh." After subsisting on a diet of nothing but steamed water and envelope glue from the various mailers of his guru's annual funding drive, the idea struck Grangler during an intense hallucination on day 19.

"Sure, lots of people like their meat cooked, but I'm the type of guy who likes to think outside the box," says Grangler, drawing a box in the sand of his zen garden, then a figure outside of it to represent himself. "But cooking surely destroys or at least hampers meat's natural nutrients and vitamins on a molecular level. Don't believe me? Well, all of those apex predators out there seem to be doing alright for themselves. Except for the ones I shoot on my yearly safaris. But you have to admit, with my eight guides and various automatic weapons, the deck is kind of stacked against them."

Though large chains aren't forward-thinking enough to carry Grangler's innovative product, small, organic grocery stores in San Francisco can't keep their shelves stocked. 36 dollars may seem like a hefty sum for a single chicken breast, but Raw Chicken requires careful preparation far removed from the kill floors of dangerous and unhealthy factory farms. First, the meat is purchased from major grocery stores. Then it's aged for 36 hours in a sterilized parking lot. When the chicken develops a thin, grey-yellow film, it's dropped into bags and begins its four-day voyage to the Bay Area (for tax purposes, all Raw Chicken is prepared in Delaware). And the best part? With its recyclable bag packaging, it's completely eco-friendly.

According to Grangler, the taste of Raw Chicken might be a little much for some people: "We're not used to how we should be eating meat. So when our body tastes something that's loaded with more nutrients than we've ever tasted before, of course there's going to be some gagging, and maybe some vomiting. But that's what the bag is for! We've even had some of our consumers pass out after ingesting Raw Chicken, and you know what? Though the trip to the hospital might have been inconvenient, each one of these people was diagnosed with completely unrelated severe food poisoning. Just think: If the intense flavor of Raw Chicken didn't send them to a doctor, right now they'd be dead. I like to think of myself as a god."

Though the verdict's out on Raw Chicken, Denis Grangler remains a popular figure, with some of the largest venues in the Bay Area cancelling his talks due to claims of criminal negligence. And since he's an unorthodox man, he'll be making an unorthodox appearance this Saturday at San Francisco's Superior Court of California, representing himself in "The State of California vs. Denis Grangler." Despite his situation, Grangler remains optimistic about the outcome. "I'm just going to look that jury in the eye, and tell them society is already a prison, so why bother locking me up? It's airtight."