Into the Record Books by a Hair

You know, I always wanted to be famous. Not the kind of famous that puts you in the tabloids, just well known. Recognized if you will. But, at some point I realized that being special and important required a lot of hard work, while playing Nintendo 64 required a lot less. So ten years later, I am, unfortunately, the undisputed Mario Cart champion. But is it too late for a man to dream? Can a person change?

An Expert at the Top of Her GameMost of my childhood was spent in the library. Not because I loved to read, or enjoyed the mixed antisocial society within the library's walls, but because it was beside the school, giving my parents a free place to store their child until they got off work. I'll never admit to reading a book, but I must confess to looking at quite a few pictures during my Library Years, and the best ones were always in The Guinness Book of World Records. Long before the Internet gave us the ability to see pictures of a man pulling his ass apart and girls defecating on themselves, the Tomb of Guinness was the only place for young adults to get grossed out. So I spent my afternoons in the under-stuffed beanbag chairs, day after day, looking at the man who never cut his fingernails.

Eventually the people inside the book became legends, and their exploits were traded among children like baseball cards. Every few pages, I'd put my finger on a picture, look up from the book, and shout at any nearby kid.
"Look at this guy. He ate an airplane!"
Then whoever listened would challenge me, "Whoa, whoa, whoa, hold on a minute. This prostitute once sucked off fourteen men in the back of an Arby's during an NFL Halftime report."
After this blow, I'd be forced to fall back onto my old safety, the sure-fire-win, page 246. The challenger would have one look at that 150lb tumor and shuffle away in defeat. My time, my ego, my whole life. All based on one book. 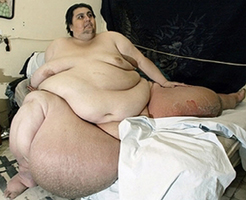 The sad thing is that I earnestly respected these freaks. Let's not skirt around it--they're freaks. No normal person would ever even think of eating an airplane unless they had a lot of "alone time." These rejects of nature and society became equals with my other role models. The Cowboys winning two Superbowls in the 90's was parallel to the two-headed Siamese twin. I wanted to be an MVP and have the world's largest gallbladder at the same time.

I eventually grew up. And like all other aging children, my role models began representing what I'd never achieve. For a moment in my youth, everything became clear, and I knew that it would take a miracle for me to become famous. Well... I think the miracle arrived earlier this week.