Batman:What is it now, Commissioner Gordon?

Bruce Banner:Er, this is Dr. Banner calling for Peter Parker. The radiated antiperspirant samples he requested are ready.

Batman:There's no one here by the name of Peter.

Batman:I'm afraid not. Looks like you're trying to call someone in a Marvel area code, but you dialed the DC code.

Batman:Don't worry about it, your finger must have slipped. Just try again.

Bruce Banner:God, how could I have done this? Sometimes I make myself so... angry...

Batman:It's nothing to get worked up over. Really.

Batman:Hey, are you okay buddy? 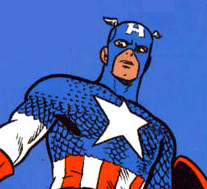 (the unmistakable sound of several men in spandex struggling)

Batman:Hello? What the heck is going on?

Batman:Answering a phone call from a turkish spa for the mentally ill and regretting it more with each passing second?

Captain America:Oh great, a comedian. I don't know what you said to Bruce to set him off, but you're going to pay. In frowns.

Batman:Yeah, okay. Look, I'm Batman. I don't have time for this nonsense. Good luck finding a cure for whatever's wrong with all of you.

Batman:Who was that? There's more of you now?

Captain America:There's a whole team of us. Speaker phone button. Take that, bolshevist!

Batman:Okay already. I played NBA Jam too, TWELVE YEARS AGO.

Captain America:Don't even bother hanging up, we'll just keep calling. You'll find that the Avengers are quite relentless in our pursuit of justice.

Batman:Look, what do you want?

Iron Man: I want you to shut up.

Batman:Then all you have to do is hang up the phone.

Batman:I sort of counted on that happening.

Batman:If you guys are trying to intimidate me, it won't work. I've heard all about the Avengers. You guys have split up so many times you make even the sluttiest amoeba look like a virgin. You don't scare anyone but the dude at the post office who has to process change of address forms.

Captain America:Ouch. How's that DC universe holding up? Which iteration are you guys on now? I'm surprised it hasn't been destroyed, replaced, or merged with an alternate universe while we've been talking.

Captain America:I'd hate to make you angry, you might use your superior intellect to beat me at checkers or something. Hey Hulk, come over here. What was it you said about Batman before? 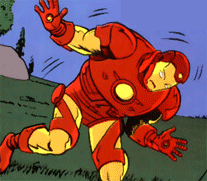 Batman:That does it, I'm getting Superman in on this call.

(Batman plays a special slide whistle to summon Superman, then the two of them fumble with the phone's buttons for a few moments)

Batman:- think that was the redial button. Where's the speakerphone? These stupid buttons need labels.

Superman: Why do you have Superboy on speed dial? He's at the top of the list, too.

Captain America:Hey, Batman was just telling us how he could beat your ass in a fight.

Superman: Did you really say that?

Batman:Why would I say that? I've already beaten your... no, wait.

Superman: I see how it is. You and I are going to have a talk later, little man.

Captain America:Superman, I just wanted to let you know that I respect all you've done for the United States over the years. The Avengers salute you!

Superman: Why thank you. Hey, do you guys know anything about audio equipment? I just bought a car stereo because it had this cool faceplate that glowed, but I don't have a car. Is there any way we can hook it up in my living room?

Captain America:Sure, we've got plenty of wires around here and Iron Man's practically a robot. We can probably figure something out. I think we've even got some rubber cement somewhere.

Superman: Sweet. I'll swing by to pick you guys up. Pizza and beer's on me.

Batman:Wait, these guys are the reason I called for your help. They're the enemy!

Superman: Quiet, you. If you ever talk to me again, I will burn your legs off with my eyes.

Batman:Thank you, I'll let him know.