This Week in Nerd Rage

I edited this generic clipart all by myself. Dun-dun-dun-doo! Nerd Rage News: your leading source for the news angry nerds really care about. We scour the Internet to find nerds raging as it happens. Live, local, late-breaking, Nerd Rage News starts right now.

Good evening, this is Rock Meteorite. Our top story tonight, can Sony release a game console without including a video cable that the majority of their users won't have a use for? That’s the question many nerds face as news arrives that the PlayStation 3 will not come packaged with an HDMI cable when it is released this Fall, according to some barely readable fine print. Our reporter Tim Takaguchi is live in Santa Monica with more details on this tragic development. Tim?

Yes Rock, it's true. Sony has decided to not ship the PS3 with a completely non-essential cable and it has video gamers fuming.

The PS3 was set to be Sony's landmark console, doing battle with Microsoft's already released graphics powerhouse Xbox 360. But now gamers are wondering if anything really matters anymore.

"This is fuckin' stupid of them," said eliteGoKu6000 of the news. "Sony really fucked this one up. This Fall I'm begging my parents to buy me a Nintendo, NOT a PS3. Fuckers."

Others were far less kind. "I hope they don't sell a single system. I hope Sony burns down and Crash Bandicoot is face-fucked and dies. Fuck them fuckers fuckers fuck them fuck them!!!" said SolidSnakePWNS182.

Now we asked several upset gamers why it would be beneficial for Sony and consumers to include a cable the majority of their users have no use for, thus increasing the overall cost of the system, rather than let those who do have a TV with an HDMI input buy one separately. The most common answer given was, "You’re a fuckin’ faggot."

The question of success for Sony now hangs in the balance. We contacted Sony about the lack of an HDMI cable and an official spokesperson told us, "What? Are you idiots serious? Don't you have anything better to worry about?" Back to you, Rock.

Thank you Tim. In other news, last weekend Sirius Satellite Radio aired a compilation of classic bits from the Howard Stern Show for casual and hardcore fans alike to enjoy. However, some hardcore radio nerds didn’t quite get what they bargained for. Rob Takaguchi reports.

It was billed as a landmark event, heralding the so-called liberation of thousands of hours of Howard Stern Show history by playing requested clips all weekend long. However, many who sought to sit by the radio for four days straight, foregoing showers, tooth brushing, and sleep were disappointed when clips they heard in the first 33 hours were replayed all over again.

When nerds rage, we'll be there. After shoving the 20th slice of pizza into their slobbish mouths the radio nerds took to the Internet, launching into a vicious attack on Sirius and the Howard Stern Show with each greasy keystroke. Many threatened to cancel their subscriptions, toss out their radios, and sit in the closet crying to themselves while they wonder why an inane talk show means so much to them.

"I put my dog to sleep, slit my wife's throat, drowned my children in the bathtub, and took my pickup truck out to the desert, because several leaves block that super powerful satellite signal, so I could listen all weekend with no interruptions. But they took my heart and trampled all over it. I will never be the same again."

At this point the unidentified man removed a .45 from his jacket, pointed it to his head, and pulled the trigger. Nerd Rage News has decided not to air this footage even though it was really funny to see a guy take a radio show so seriously.

It's all an agonizing pain for these pathetic people who put their sad, empty lives into a radio show, a radio show that really should have been cancelled when Jackie left. Back to you in the studio, Rock.

Thank you Rob. We now pause the day's nerd rage news for a look back on nerd rage history. It was 1995 and the world had its eyes on Nintendo. How would the Japanese gaming giant attempt to reclaim their position as top dog of the video game industry? What would be their answer to Sony's hip new PlayStation console? Ron Takaguchi takes us back to a simpler time.

Over a decade ago Nintendo announced the Nintendo 64, their new foray into the console wars. However, many gamers were surprised at Nintendo's insistence of using cartridges over compact discs. Within seconds Usenet exploded in a fury of angry, sweaty posts.

And the battle raged on with each asthmatic keystroke.

We caught up with Mario and asked him for his thoughts on events that transpired a decade ago.

"I take video games very, very seriously," said Mario, sitting in his studio apartment above an abandoned movie theater from the golden age of cinema when Roger Corman was the king of the B-movie. "I'm not just in the industry, I am the industry.

"I see someone spewing that Nintendo BULLSHIT on the Internet and I feel it’s my duty as someone in the industry to give that jerk off what's coming to him. At the end of the day, I feel like I really want to stick my head in an oven." Mario then broke down and cried on camera. We have decided to air this footage.

The Nintendo 64 CD vs. Cartridge war ended when "-\\-the-\\- M-A-S-T-E-R" arrived and cleared everything up, thus starting an era of peace that would last for almost four minutes.

And Jesus Christ, would you just look at this. I can’t even fit the guy’s entire sig on the screen. Watch out Saturday Night Live! Here comes KingChocobokick! I’m sick of this shit, back to you Rock.

Thank you for that baffling report Ron. The Xbox 360, a triumph of innovation and functionality. Microsoft's latest console has enjoyed unlimited success since its launch last year, but some accuse Microsoft of rushing the game system to launch to appease the almighty dollar. Tom Takaguchi sits down with Peter Moore, head of global marketing for the Xbox 360, to find out just why some Xbox 360s are breaking like a mother fucker.

It seems today that every thread about the Xbox 360 is derailed by someone who has experienced their system breaking. Some angry nerds charge Microsoft with fraud and deceit, claiming they will never purchase another Microsoft product again. But how far does the conspiracy penetrate the ranks at Microsoft? Is it a normal ratio of faulty systems to working systems, or is it far more sinister? Peter Moore explains.

Nerd Rage News: Thank you for sitting down with us Peter. 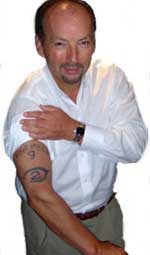 Lookin' good there, stud. Peter Moore: No problem, Tom. You look very pretty today. Did you do something with your hair? It looks fabulous.

Nerd Rage News: Why thank you Peter. I did get a new do recently. I’m glad you like it. But let's get to the crux of the issue. Many consumers who have purchased an Xbox 360 in the last year have experienced it fail, many just days after the 90-day warranty expired. How do you respond to allegations that your company rushed the 360 to launch therefore releasing a faulty product?

Moore: That is correct. We rushed 360 out the doors in order to get it into the marketplace before the PS3. One of the great features of the 360 is that we can set individual systems to break precisely one week after the 90-day warranty expires, causing consumers to purchase a new system, thereby sky-rocketing our profit margins. It’s a win-win for everybody involved. In this way we satisfy the needs of consumers in ways we never could before.

Nerd Rage News: Peter Moore you are so smart! I could never resist your charms and Halo tattoo! Take me into your manly arms Peter. Take me, and do what you will!

Moore: Oh Tom, my love. Please run away with me!

Nerd Rage News: You've made me the happiest woman in the world, Peter...

Depending on who you are the preceding fictional exchange is either complete sarcasm or the absolute truth. Only God and the millions of Xbox 360s know what lies in the hearts of man. For Nerd Rage News, I'm Tom Takaguchi Moore.

And that's Nerd Rage News for this, the 7th of September, 2006. Good night, and good luck. Suck on that, Olbermann.

Do you have a hot Nerd Rage News tip? Know where Nerd Rage is going on and want us to cover it? Send it into the newsroom!