I made this promotional ad for Drew and Greg to use in their upcoming "Return to Castle Wolfenstein" game thingy. Since they're both fancy lads who drive fancy lad cars and dine in fancy lad eating establishments, I can only assume that the bags of money are on the way to my house. And they'd BETTER be full of money, not white powder like that letter I got today from the uncle I never knew existed in Pakistan. 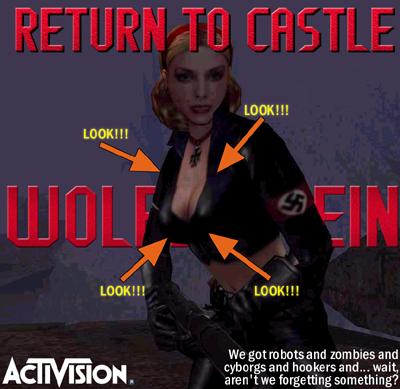 As you can see, this lady has large boobs, which people like YOU want (according to the folks in Activision's sales team). There are also a lot of zombies and mummies and Draculas and Frankensteins and puppets or whatever lame undead evil monsters YOU want. Activision knows what you want, and it's:

So thank YOU, Activision for giving me what YOU want! Er, no wait, it's what I apparently want! My mistake.