Since its launch, a Kickstarter to develop a Ron Paul video game has hit the Internet rounds and wooed Ron Paul supporters to the tune of several thousands of dollars in an appropriately free market kind of way. The raised funds will back a man's effort to write and develop a video game based on the candidate. Despite what tech blogs and other news media are reporting about this thing, what's happening really isn't so much a story of a good-hearted supporter trying to build support in any way he can for his political candidate of choice by using the skills he possesses. Rather, it's the story of a guy who likes Ron Paul and likes following basic tutorials on game creation, and is combining those two into something that's already been sold to well over 200 people for a grand total of nearly $10,000, somehow.

Let's take a look at this thing. Here's what the Kickstarter page says about the effort:

The Road to REVOLution is a sidescrolling platformer action/adventure game, reminiscent of console classics like Super Mario Brothers and Sonic the Hedgehog. You play the role of Ron Paul and make your way across all 50 states collecting Gold (sound money) and Delegates. The game is full of original artwork and gameplay mechanics. Indie Game Development at its finest, the game is designed, programmed, conceived, and produced by me, D.S. Williams.

The bolding is my own emphasis. Totally cheesy and hamfisted Ron Paul gimmickry aside, the dude claims to be putting out a high-quality, original game with all original mechanics, programmed and designed by him. Cool, a noble effort. It's also cool when you have open directories on your server as well as the actual source code of your game uploaded to those very open directories. That way, anyone in the world can look at it and see cool stuff like this:

Essentially, what this means is that the author is simply following a cookie-cutter tutorial on how to make a video game. In fact, it seems to be this one, which is a cool helpful article that includes all the necessary source code in very clear boxes that make it super easy to copy and paste. Pretty ingenious! Free market principles at play, truly.

"But Enemy of Freedom," you're probably saying, "Perhaps it's just a framework! Just the basics to get the game off the ground! Certainly there are no other instances where the author is doing anything shady or flagrantly attempting to pass something off as his own while reeling in the cash!"

Let's look at that supposed original artwork referenced in the above quote: 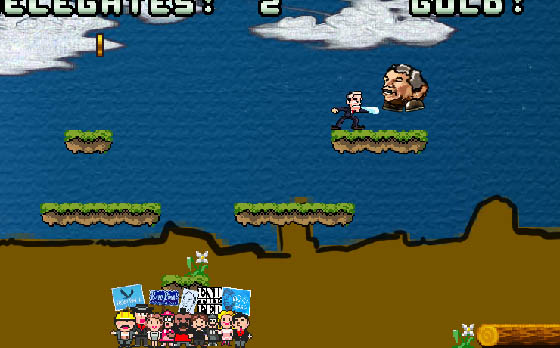 First of all, anyone who has ever heard of a Super NES will tell you that the sprites in that mob scene are from Earthbound. The weird George W. Bush head-looking-thing also seems to have been a Monstar from Braid in a past life, and Ron himself is just a slightly modified Waluigi sprite, as evidenced by this sprite sheet that was also hosted among the source code. Look at them both side by side: 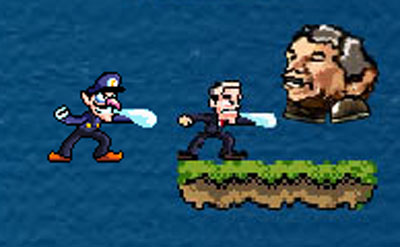 Wow. I extend my sincerest congratulations to those who have contributed to the project. You've forked over about $10,000 to let some guy wallow in his own filth for 2 months as he leisurely follows a "how to program video games" tutorial, while taking the occasional break to draw Ron Paul's head on Waluigi's body. This is a gaming revolution worthy of Ron Paul himself, indeed.

"Williams goes on to speculate that indie gaming will hopefully thrive in the 'face of dull, spiritless, cloned, big-budget games'" -MSNBC

"Hey! You might be getting better, but nobody cheats better than Waluigi! You got that?!" -Waluigi, Mario Golf: Toadstool Tour

Thanks to @bucketmouse and @prognosys for discovering a whole lot about the world of Ron Paul gaming!