SA Behind The Scenes: Our Readers Are Morons 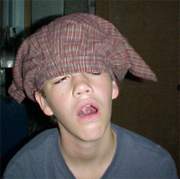 DUR! I THINK RICH "LOWTAX" KYANKA WILL LIKE MY CRAZY ICQ PRANK WHERE I PRETEND TO BE A COW! DUR!Since I don't have any star-studded frontpage material lined up for tonight (like usual), I figured that I would give everybody a little look into the "behind the scenes" action involved with running Something Awful. Anybody with an IQ greater than the value of pi is probably aware that I get a lot of email every day. A lot. So much that I still need to reply to over 1800 messages this week. A quick breakdown of these email messages results in the following categorizations:

29.0% - Messages demanding I update some random section of the site which hasn't been worked on since the bombing of Pearl Harbor.

28.9% - Messages demanding I don't update some random section of the site which hasn't been worked on since the bombing of Pearl Harbor.

27.3% - Messages demanding I stop updating the site altogether and do something more productive, like huff paint fumes and rubbing alcohol from a janitorial closet.

25.1% - People sending me the ICY HOT STUNTAZ link for the nine millionth time. I swear to God, I did a search through the ALOD box and their web address came up over 200 times in the past 12 days. As far as I can tell, they were somehow able to include their website address as the startup webpage that comes with every Gateway computer or something.

24.2% - People sending me the Alex Chiu link, either because they want the referrals for their free magnetic rings or they got some free magnetic rings and are being telepathically commanded to send me the URL repeatedly until my brain caves in like the Satanic Halloween masks from "Halloween 3: Season of the Witch."

21.8% - Customers asking where the hell their Jeff K. / SA t-shirts are. The Hair Giant claimed all shirts would be sent out two days ago, so I assume they are all in the mail. However, since I've been calling the guy nonstop, leaving messages, and he has been failing to return them, I really don't know at this point. Assume that yours is on the way. If I learn anything to the contrary, I'll post it on this page.

19.9% - People begging that I link to their site on every page of SA in addition to tattooing their URL on my head and walking across town shouting their website's name.

18.3% - Pointless, raving fan mail from Jake Simpson. No Jake, I will NOT pee in your hand for a dollar.

16.8% - People asking to write for Something Awful, then concluding their email message with something along the lines of "AND IF U DONT LET ME WRITE FOR YOUR SHITTY SITE THEN ILL FUCKING KILL YOU YOU STUPID CUBAN JEWISH FAG CUNT MAILBOX SHOE NIGGER WHORE APPLE COW!!!"

13.2% - "Happy birthday" messages, which I inexplicably receive constantly throughout the year, despite the fact that my birthday is on May 11th. Yes, I know, happy birthday to me.

11.0% - Truly incoherent messages such as the following:

if only you were the real deal,you would be hysterical....nobody can bethat stupid!

9.1% - Emails which statistically and scientifically irrefutably prove that I suck and am the absolute worst creature to ever walk the Earth, with the possible exception of Hitler or Sam Jain.

6.3% - Flame mail to Jeff K., Cliff Yablonski, or Roger Makoe. Author acts intellectually superior throughout the entire message, despite the fact that they're taking time out of their lives to cuss out a fictional character.

4.9% - Smartasses who enjoy pointing out the most minuscule grammatical, spelling, or factual errors in the daily update. Listen u loosers, maybe I dont have time too check EVERY SINGLE LITTLE THING on this page, but for all intensive purposes, I'de say I do a pretty well job.

2.1% - People submitting the absolute most worst pranks I've ever read. See below.

0.4% - Positive email that actually compliments me on some piece of work I did. Message ends with "ha ha, just kidding, you really suck"

Let me take a moment to concentrate on that elusive 2.1% of the population who send me remarkably horrible ICQ pranks. Now I'm not one to adamantly declare what's funny and what's not, because God knows this site is just a steaming pile of rancid cow dung, but I can safely say that I get some of the most terrible ICQ transcripts ever exported into a text file. Notice that I'm not even referring to them as "pranks" anymore, as that would be mutilating the English language beyond any reasonable terms. Don't believe me? Well feast your eyes on a couple of the latest gems that were submitted to me:

Special K: hi lexus
Lexus: hiya
Special K: how r u
Lexus: fine, you?
Special K: good where r u imin tx
Lexus: detroit mi
Special K: so what do u like to do
Lexus: well I am at work now
Special K: where do u work
Lexus: global crossing
Special K: telephone
Lexus: telecommunications
Special K: cool so u married
Lexus: nope , you
Special K: yes one son u have a photo
Lexus: Not here I dont.
Special K: do u want mine
Lexus: not really

And that is the ENTIRE GODDAMN THING. That's it. That's the "prank" in its full, unedited form. I can't even discern who's being pranked here, besides myself for believing that somebody considers this to be a prank. If you thought that was bad, I hate to break it to you, but the parade of pain continues with yet another prank by a completely different person who probably shares the same brain cell with the person above:

Ha ha! It's funny because the guy was obviously a pedophile! Wow! Ziiing! I'm going to think twice before chatting it up with another eight-year old on AOL! And the climax of the prank, oh the climax, when he pretended to be the Chicago Police Department? COMEDY PLATINUM! Somebody stop this guy before he ICQs some old woman pretending to sell vacuum cleaners and then at the last moment reveals that HE DOESN'T SELL VACUUM CLEANERS! AND HE'S ACTUALLY THE CHICAGO POLICE DEPARTMENT AND HE'S HEADING OVER TO ARREST HER FOR CHILD MOLESTATION! Ha ha! The Chicago Police!

So I hope you've enjoyed this brief but painful look into my inbox. If you haven't, then I look forward to reading your email message categorically listing the 39 reasons why I have let you down and how I deserve a fate worse than death.

Everybody's favorite l33t haX0r, Jeff K., has returned to pen another journalistic gem. May I proudly present to you "JEFF K."S GUIDE TO THIS YEAR"S E3 (THIS YEAR, NOT LAST YEAR!)!!!" That's right, get a sneak preview of this year's e3 without ever having to leave your chair! Wow!

Jerry will probably scoop ice cream into his fat fat mouth becuase all that guy eats si ice Cream these days becuase I think he has a tapeworm and he has too feed it every 9 minutes with lard. Last year Jerry threw up circus peanuts all ovar on teh bus ride to e3 but he bettar not this year becausethat was a GROSS EVENT TO OCCUR ON A BUS!!! jerry's mom wants him to get on an all grain diet but he probaly cant because theres no grain in bacon. SO ANYWAYS hear is my E3 PREVIEW with all teh shizztag comeing up at E3!!!

Okay, so maybe that isn't the best block of text to copy, but you get the point. Head on over and read it now! Or don't! I really do not care at this point!