Lowtax SHOULD Have Been Hit By A Bus

Lowtax SHOULD Have Been Hit By a Bus 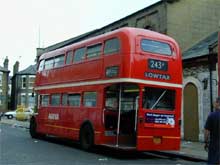 Double the pain.That filthy cur Lowtax wants to call me a liar? Oh, he's all big and everything when it's HIS web site, but I bet if I met him in the street and told everyone he got hit by a bus he would just nod and smile in agreement. That's because he is such a coward. But I'm not going to try to intimidate him with my massive biceps; instead I will challenge him to a duel of the minds and engage him in a BATTLE RAP TO THE DEATH! First shot's across your bow, SS R-Lo!

I grab the mic and the crowd goes silent,
Cuz when I bust rhymes I bust them violent,
R-Lo on the curb to catch that bus,
Run the nigga down without no fuss.

Wearin' video card shirts,
Like a giveaway bitch,
Broke ass nigga,
But his name is Rich.

Get back to the stop that come 50 mile an hour,
Put out your tibia and feel that power,
Run over again by my mad mic skills,
Better join an ad network to pay the medical bills.

When I first saw a promo for "Battlebots" I thought "hey, now this is a good idea! Finally someone decided to bring the hit straight-to-video movie 'Robot Jox' to life!" Then I watched "Battlebots" and realized that the only kind of robot anyone made were little crappy wedges that could flip over other robots over and push them into a wall. There were different weight classes of rolling wedges and somehow some were superior to others and would win by pushing their opponent gently into a wall enough times to earn "points." I guess they could eliminate their opponent, but I certainly never saw that happen.

Just when I was beginning to think fighting robots could not get any lamer, I read on cnn.com about Dean Kamen and his high school competition that is a pathetic parody of "Battlebots." If you're not familiar with Mr. Kamen, he is the inventor behind the mysterious and supposedly revolutionary "Ginger", which I am guessing is a robot he designed that is capable of fainting if intimidated. So what was this competition he started like?

Two minutes before each round each team learns it's going to be working with three other teams. And they have to work together to score points, doing everything from putting balls on goals to balancing on a teeter totter bridge.

I for one am sick of this wussy fake "robot" crap... each year they are emasculating robots more and more. I am not going to stand for it any longer! I will turn this disturbing trend around by holding my own robot death battle competition on the barren landscape of the Utah alkali flats, with only one rule: no nuclear weapons. I am calling out the winners of this year's sissy robot competition - team Beatty Hammond from Hammond, Indiana - to match their lameass ball-balancing assault bot against "BLOODSMASHER," the robot of my own design. Let's take a look at the competitors.

Detects obstacles after running into them

May drop ball between itself and opponent

Can move in reverse

Can crush SUV in hydraulic jaws

Secret nuclear bomb strapped to back

May go into unstoppable berserker frenzy

Lowtax has also expressed an interest in entering his robot, "The Molestinator," into the competition. He will challenge the winner of the battle between BLOODSMASHER and BALLBALANCER. Rich isn't really raising the bar for tough robots, but regardless, here are its specs:

Robot shocks anybody who tries to pick it up or turn it on or walk within a 500 foot radius of it.

Toothpick sticking out of rear, from the time at a party when a drunk guy fell on it and dropped his food into the battery pack

Robot catches fire whenever anything gets near it

Robot is actually a painted rock on wheels

I would have to say the smart money is on BLOODSMASHER this year, although BALLBALANCER could come from left field and balance balls all over the competition. As usual, Lowtax's entry might also prove to be a real wild card.

Maverick SA legal counsel Leonard "J." Crabs has done it again, nipping a lawsuit against Something Awful in the bud. After a vigorous e-mail exchange between Lowtax and the nefarious polite David A. Tijoe, who wanted Cliff Yablonski to remove a certain incriminating photo, Leonard swung into action, bringing to bear the laser-like precision he uses in the courtroom.

If I had an ounce of rope for every two bit Nancy Boy who dare challenge my legal arms, I would have more rope than Stanly Frebowski, the Rope King of San Antonio. Please forward me the name of your lawyer, so I may attack him with the fury of righteousness and injure him with my LEGAL FURY. I look forward to receiving documents detailing your case, and will use them as a BIB when I dine on fine lobster and Coca Cola tonight!

If this case does actually make it into a court of law, Mr. Tijoe will have to watch out for the unmitigated wrath of Leonard Crabs. He can call upon the experience of hundreds of mock lawsuits against his dog played out in his basement and the one time he defended himself against charges that he contributed to the delinquency of a folding table.