It's out, Cheryl. Did you watch it?

Is that Mon Mothma back there looking like your beautiful lesbian aunt? Yep it is. Now that $89.99 I spent on "Death Star Samurai" looks like a pretty smart investment, doesn't it Cheryl? The stock market can go any direction, it's not based on anything real, right? But that Vader is only going up in value. It's staying in the fucking box, Cheryl.

Oh my god. The Death Star dish being lowered into place. The shadow sweeping over seemingly tiny Star Destroyers like a Lucas wipe transition. It's jaw-dropping. Much like the ebay price is going to be on Death Star Samurai. It's limited edition, Cheryl. You're not on the collector's email list like me. Everyone is talking about these samurai figures.

Wullf Yularen! Admiral Thrawn! Love that white uniform. My Thrawn 1/6th figure is finally going to go up in value, although my Power of the Force Thrawns are still languishing. But you have to stop rubbing that in my face, Cheryl. I have to take risks to make some money. Yes, I bought thirty Sebulbas. No, they haven't gone up a cent in value. But have they lost value? Go talk to that Microsoft stock you bought.

Shadow Trooper, hello. There's going to be a whole range of these guys and I am already clearing up space on my shelf for the 1/6th figures and maybe even a bust. They'll save money on the paint and they can put it into a sharper sculpt. Trust me on this one, Cheryl. If you stopped questioning my every move then maybe I would have built that shelf in the bedroom instead of the garage and I wouldn't have an entire case of cold-damaged Mara Jades.

I saved the best for last. AT-ATs in the jungle! Already drooling at the thought of buying a LEGO jungle AT-AT. I'm not going to put it together, of course. Opening the box sacrifices half of the value. Remember when Aiden found my Millennium Falcon? You were supposed to put the gate up on the den, Cheryl! 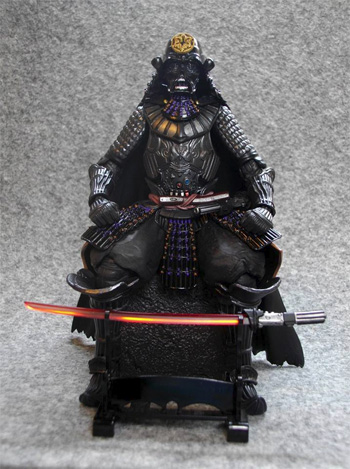 That is why Samurai Darth Vader is such a great buy. He comes in a showcase box, so I can enjoy him on the shelf with my Samurai Storm Troopers and Ronin Boba Fett. Having a complete set is going to be worth a fortune, Cheryl, but you go ahead and tell me again why I shouldn't pay the house payment on my Diners Club Card.

I'll be waiting and watching the Rogue One trailer again. And you'll eventually be glad I bought 40 Samurai Darth Vaders.