Welcome to another edition of gossip gab, the hottest news fresh from the rumor mills of Hollywood and beyond. I have some SHOCKING gossip for you today, as well as a look at red carpet fashion do's and don'ts, and a very special Spring movie review with my co-host, Hector, the magical talking toy monkey. I alone have the INSIDE scoop on tinsel town's dirty laundry and BREAKING news, mainly because I sneak into their mansions and masturbate on their SOCKS. Restraining order be damned, I am dedicated to bringing you the fully story, even if that means kidnaping, interrogation, and torture. Personally I have no stomach for such things, so Hector tends to take over with a sadistic delight. Vin Diesel may play tough guys on the big screen, but he screams like a little girl when you put hot coals in his anus. Lets get to that JUICY gossip!

First let us observe a moment of silence for the greatest tragedy in American history. 10 times worse than the titanic, World Trade Center, and launch of Fox News combined. Jennifer Aniston and boy toy Brad Pitt have officially called it quits last week, ending what was a perfect Hollywood romance of pure Aryan genes. We are all still in shock and disbelief here at the home office, and my whole belief system in Hollywood romance has been shattered. We are still unsure about why the perfect pair called it splitsville, but we think it has something to do with Terri Schiavo's feeding tube being removed.

Hillary Swank, fresh off an Oscar win for her portrayal of a female boxer in the movie Million Dollar Baby, has taken on an even more challenging role in a new bio-documentary about the life and times of Ernest Borgnine. Swank's agent says that she has been packing on over a hundred pounds and putting her face in a dishwasher for 8 hours a day. This will push the envelope on the trend of her masculine movie roles that simply delight the award judges. 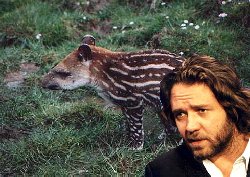 Heartthrob Russell Crowe was involved in yet another drunken brawl, this time with a tapir from the Sydney zoo who Crowe said was "undermining his talent as a musician". This comes on the heels of the news that Russell Crowe's band broke up for "creative differences", like playing songs that don't cause listeners to throw themselves into the mouths of great white sharks in agony. The tapir has not pressed charges as of yet.

HOT ITEM!: Lou Diamond Phillips has been complaining of toothaches and it turns out that he needs to get his wisdom teeth out next Tuesday. I don't have any confirmation as of yet if it's just a couple or all four teeth, but we will stay on top of this story and keep you in the loop as it progresses. When our gossip hounds caught up with Lou he would only comment with, "My mouth kind of hurts."

I do, however, have confirmation that Christina Aguilera has tested positive for every STD known to modern science, as well as leading to the discovery of 3 previously unknown diseases. The doctors at MIT were extremely excited at getting a chance to observe a very rare STD called "Molluzious Febloma", that can only be contracted in the jungles of Borneo by having sexual relations with tree sloths. Aguilera denied ever going to Borneo or having sex with a sloth, but we remain skeptical after seeing a scorpion crawl out of her vagina at the Grammy's.

NEWS FLASH!: Fred Savage has reportedly thrown himself off a weather balloon in an apparent suicide attempt. His fall was broken by actors Tom Hanks, Johnny Depp, and Edward Norton, who were taking a walk together below and perished when the slightly chubby Savage landed on top of them. Fred Savage survived with minor cuts and bruises.

Speaking of boo-boo's, Mel Gibson's latest project is a bloody picture called "The Spanish Inquisition", and depicts over 4 hours of brutal torture and violence. Afraid of getting an NC-17 rating, he threw in a fundamental religious message and it was changed to a G rating by the MPAA. Gibson says he's enjoying his stint as a director, and that working behind the camera gives him more time to spend time in his basement getting beaten with a rubber hose by a latex-clad midget.

John Travolta was admitted to a local emergency room after a mishap in his bathroom this morning. Apparently he was up all night listening to Scientology tapes and snorting pixie dust, when he walked into his bathroom to disrobe for a shower. He then saw his pubic hair in the mirror and thought it was a werewolf, so he tried to jump into the mirror thinking it was a space portal. The lacerations from the broken glass were only superficial, but he will still be laid up for about a week. 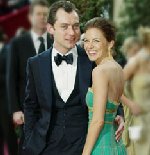 It looks like a young Anthony Hopkins! For years Jude has been dazzling us with his dashing English grace and movie presence and now he is the talk of Tinseltown as he walks the red carpet with his expensive arm candy. When Jude was first starting out in the business, he spent his days trying to make rainbows with glass and twine, but now he's got so much money he bought his own personal rainbow that shines on him during his red carpet walks. Hey Jude, Hair Club for Men called and they want their head sample back. But I kid Jude Law.

Angelina Jolie has just been named Entertainment Weekly's #1 most sexy person in the entire universe, and you can see why! Sure some people say her face sort of looks like a cross between a Mexican and Teenage Mutant Ninja Turtle, but the people have spoken, she is hot to trot! This timeless white dress doesn't need to be fancy, for it is just an empty canvas on the masterpiece that is Angelina Jolie. Heck, I'm a flaming homosexual and even I would do her! 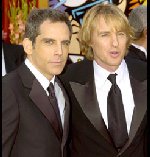 It's official! Ben Stiller and Owen Wilson have undergone an experimental surgery to get attached at the waist at the advice of their agents. Apparently moviegoers are in love with these two goofballs when they appear in buddy films together, and the pair made a professional decision to get the procedure done, ensuring a partnership that will last a lifetime. Both look very suave in these double-breasted tuxedos from Chester and Chester. I'm looking forward to a movie remake of Perfect Strangers, coming out next summer to a theatre near you.

This is a perfect example of what NOT to wear when attending the Oscars. Sean Young, who hasn't done a good movie since Bladerunner in 1982, crashed this year's party wearing a simply horrid dress that I wouldn't even put on my most ignored doll. She looks like she wants to be a pretty princess but ends up looking like a middle-aged, attention starved whore, whose womb is as dry and desolate as Death Valley. This my friends, is a fashion nightmare. It's a fucking mess and I'm going to the bathroom to puke my guts out this very minute.

Some HUGE movies have just hit the big screen and myself and Hector will be reviewing a few of them to let you know if it's worth your hard earned money to head out to the theatre for a viewing. I'll be right back because I have to take a personal loan out so I can buy a popcorn, soda, and Sno-Caps.

Frolixo: Welcome Hector, are you ready to review the movies we just watched?

Frolixo: Let’s start with Sin City. Personally I thought it was a hoot and a half. The style, look, and action really grabbed me by the ears and kicked me in the balls. What did you think Hector?

Frolixo: That doesn't even make sense! You must admit that this is some groundbreaking cinema that has never been done before.

Hector: You know something, I never took a crap off a freeway overpass onto the windshield of a moving school bus, making it crash into a swamp, killing the driver and all the children on board, but I wouldn't go around bragging about it if I did it just because "it's never been done before". Oh wait I did do that, but you know what I'm getting at. Next movie!

Frolixo: I thought this movie was simply a treat. Comedy is the best medicine, and it comes in large doses with the movie "Guess Who". Ashton Kutcher plays a white college student that falls in love and wants to marry his girlfriend, but guess what? She's a black! And to make it even more interesting, her father is a black as well, and he is played by Bernie Mac so you know sparks are going to fly. Hahahahahaha, white people and black people together, only in Hollywood!

Hector: Shut your gob you festering cunt! I was rather intrigued by this movie at first because I'm a big fan of Bernie Mac, but this "fish out of water" scenario is so overplayed and boring that you can see the jokes coming miles away. I knew all the gags before I even walked into the theatre so I just went to sleep instead.

Frolixo: The first Ring marked the comeback of the horror genre in Hollywood, and what better way to keep it going by making a sequel in "The Ring Two". Frankly I was shaking in my slippers while watching this movie and even had a catheter put in because it was so scary I didn't want to pee on myself. There is something about girls coming out of wells that give me the willies.

Hector: More like girls in general give you the willies because you're a huge faggot.

Frolixo: Hector please I implore you!

Hector: I'll implore my fist in your face in a second if you don't get your freckled redheaded ass away from me and leave me alone.

Frolixo: But you promised you would help me with today's update.

Hector: I'm sorry you're right. Come here so I can give you a hug and we can make up.

I hope you enjoyed the Saturday Gossip Gab, where we bring the news from the hottest stars to your home computer! I'm going to go to a hospital now because I am bleeding a lot from my head, arms, chest, and face. Toodles!