Zack here to interrupt your irregularly scheduled Livestock article with an update about the The J-List and Something Awful Mega Kawaii Prize Bonanza Showdown Series Two! The entries are continuing to roll in and I am starting to get some really good ones that aren't just MS-Paint images of Robocop pointing a gun at a poorly clipped photo of Anderson Cooper. Keep them coming! Delightful prizes await the finest entries! Fame, power, and women will be your reward. Okay, mild notoriety and an inflatable sex pillow will be your reward. Contest ends April 8th, so send your entries to zackparsons@somethingawful.com with the subject line CONTEST ENTRY! Thanks again to J-list for the delightful prize packages.

It might surprise you dear readers to know that yours truly is very anxious to blow this lousy popsicle stand and strike it rich in the lucrative oil fields of Hollywood. Out there they pump a different kind of oil from the ground – a little something called "high-viscosity entertainment." Yes, I know, you’ve grown to cry painful tears reading each and every one of my articles, but I can't stay here forever. Frankly, Richard does not pay me enough to continue prostituting myself in front of all of you like some kind of slutty wordsmith with a poor understanding of grammar. And really, a man can only get so far writing hate speech on the Internet before he has to set his sights on more honest and rewarding work.

Unfortunately, Hollywood never called me back the last time I pitched some movies while subbing for a drunken Zack Parsons. I'll be honest with you; those ideas of mine were pretty lousy, if not a little derivative. Back then I was young and naïve and I didn't understand the ins and outs of the vast motion picture industrial complex, where each movie has to hit like a highly concentrated smartbomb erupting fire upon the unsuspecting population. From the opening explosion to the explosive final credits, a movie has to hold the audience captive at explosionpoint, and even draw a little blood.

I'm ready to get in the thick of things, and that means relocating to Hollywood. I'm not sure how to do it, since my knowledge of geography is pretty limited. I have a vague notion that it's somewhere in America and I remember from "The Grapes of Wrath" that you could drive west to California to escape your Depression Era troubles. Paradoxically, I'm already on the west coast in a state called "Washington," so if I drove west I would most certainly drown... Or discover Atlantis. Luckily for me, I'm prepared to pay my way there. I'll throw out a couple ideas here, and if you're a rich Hollywood mogul you can have somebody come give me a ride to this elusive "California." So while you write out a check to "Josh 'Livestock' Boruff," here are some rapid-fire pitches for undeniable summer blockbusters. 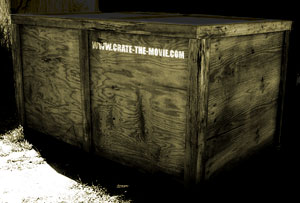 Tagline: "Within Every Crate Lies Mystery!"

Premise: When an urban legend about a mysterious crate containing a curse makes its way to an intrepid journalism major, she decides to investigate with the help of her slacker boyfriend. But behind every signature on the crate's shipping manifest lies a terrible secret shaped like a tombstone and placed on top of a buried body. As they follow the trail of dead signatures to the source, they come closer and closer to discovering the horrifying secret inside the crate – a secret that just might be a creepy Asian boy who pops out of the crate and screams only to be forced back into the crate so that there can be a sequel called "Crate 2: Unpaletteable."

Audience Appeal: People like intelligent horror movies where regular people find themselves in impossible situations suddenly devoid of any and all common sense, and this movie would have gallons of that. Imagine the anxiety audiences would feel as they watch the curious duo search a warehouse, opening crate after crate, but never finding the actual one until the last 2 minutes of the movie. Then all hell breaks loose until the credits start rolling and audiences face the horrible prospect of rebuilding their shattered lives. I think Owe Boll would make a fantastic director for this film, as I truly believe he understands the psychology of crate related horror. 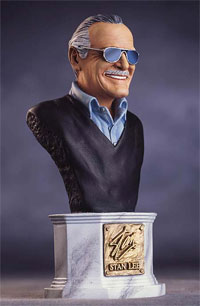 Premise: Capitalizing on the success of comic book movies like "Spider-Man," "X-Men," "Hotel Rwanda," and especially the upcoming "Sin City," "Stan Lee's Sensational City!" aims to make a lot of money and not much else. Seeing as how Stan Lee is widely credited with helping define modern comics, it's only fitting his ideas become the cornerstone of an original movie. With his desire to whore his reputation and past talent out in any way, shape, or form, it would not only be good to attach his name to this project, but it would probably cost very little. Basically, this movie would just be two hours of guys getting zapped by gamma rays, bitten by radioactive animals, and yelling "Excelsior!" and "'Nuff Said!" at each other. I mean a plot like that practically writes itself. This is not to be confused with rival film production "Jack Kirby's Clobberin' Town!" Those bastards stole the idea.

Audience Appeal: None whatsoever, but that shouldn't be a deterrence to bringing audiences an unfiltered sampling of the genius of Stan Lee. I figure you could cast Stan Lee in every part as well to save money, and there's no way in hell two hours of him yelling catchphrases while somehow being rewarded for exposing himself to deadly radiation wouldn't be entertaining.

Not only am I willing to relocate, I'm also willing to compromise on anything and everything, whether it by what I eat for dinner or whether you pay me in cash or by check. I very much want to succeed in this industry, and by succeed I more or less mean make money and then spend the money. In fact, I'm willing to not come up with any more movie ideas if the price is right. I'm also willing to be on "The Price is Right." I owe a lot of money and if I don't get it Sallie Mae is going to break my legs and harvest my valuable kidneys.