The Science and Wonder of Tomorrow 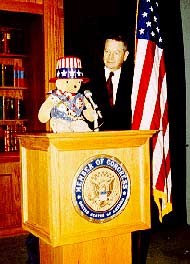 In the future mankind will at long last be triumphant in the war on terror. Unfortunately, due to the Webster-Oxford War of 2087, "terror" will have an entirely different meaning. It will be defined as "the accidental consumption of a dairy product or products previously stored in the pants of an uncouth gentleman." Our modern concept of terrorism will have ended in 2012, when a lone teenager is destined to crash a hijacked plane into Mount Terror, thus safely concluding the tangent universe that was created on 9/11 and restoring order to the universe.

The destruction wrought by disease will be reduced to painful memories infecting only a few human beings. Sadly, these infected people will then be euthanized in order to prevent the spread of said painful memories to others, where they might contaminate the happy thoughts of civilization. Almost everything will be curable by simply ingesting pills, with the exception of the common cold, which will require painful groin surgery and ten years of physical therapy. Healthcare will be free to everyone, and will be funded primarily by taxing commercial whaling ventures and the multi-trillion dollar Internet tourism industry. Everyone will be healthy, including the dead, for they will be given a periodic waxing and buffing at no cost to the family.

War, that cursed beast that claimed so many lives in its terrible march of death, will be domesticated. Future confrontations will take place between armies of highly trained St. Bernard dogs. Because St. Bernards do not like to compromise their honor, they will be heavily intoxicated prior to battle by human handlers. These noble big dogs will bleed the ground red as they sink their teeth into one another in the name of nations great and small. Unfortunately, this will ultimately get out of hand and opposing St. Bernard armies will put aside their differences and form the first St. Bernard nation state. Sadly, vampires will kill them all in a daring midnight raid. War. War never changes. 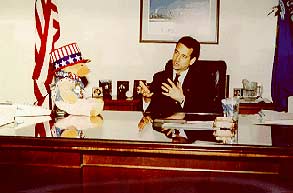 Corporate personhood will give way to corporate statehood, then eventually to corporate godhood. This will culminate in great tragedy when the Church of Ronald McDonald carries out a violent crusade to wipe out internationalized Hamburglar militancy, killing thousands of the roguish hamburger stealing deity's followers. Images of a sobbing Grimace clutching his fallen friend Hamburglar will replace pietas as some of the most recognizable religious iconography. However, strict laws will require that corporations promote peace and transcendence, greatly curtailing the spread of violence while at the same time boosting product diversity.

Our reverse-ancestors of the future will have made tremendous progress in creating a world of unparalleled equality. Racial discrimination amongst the members of mankind will be a forgotten relic, as will gender inequality. Human beings will accomplish this amazing feat by learning to hate new things, such as vampires and St. Bernards. Imperfections that limited some will be gone, thanks in part to medical science and equalizing technology such as robotic exoskeletons and trained bears for the permanently disabled to ride like horses.

Economics will lose all danger and risk, and poverty will wither away into the ethers of time. Work will be optional, and wealth will be freely available to everyone. Man will simply pay his bills with credit cards. And he will pay his credit card bills with other credit cards. By simply paying one bill with another card for infinity, man will be able to prosper and never face the consequences of debt. Our friends in the future will enjoy a utopian world paid for by a cyclorama of endless credit, keeping the harsh realities at bay permanently. 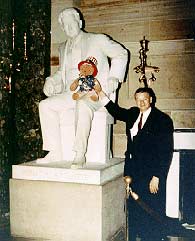 In the glorious age of tomorrow, man will no longer be dependent on fossil fuels. Instead, he will rely on a complicated Rube Goldberg device that seemingly never ends to generate unlimited power. At least that's what the government will tell everyone. The shocking truth will be that slaves will power everything, just like in the good old days. For those still fond of fossil fuels, they will be freely available from faucets at the local library.

Pepsi and Coca-Cola will cease manufacturing their flagship beverages when mankind turns toward the deliciousness that is caustic soda, a healthy and tasty alternative to the old and dated colas. The rise of caustic soda will be aided a great deal by the revelation that high fructose corn syrup, a common ingredient in beverages, is actually made out of people. This will alarm consumers not because of the cannibalistic implications, but because of the incredible flatulence that comes from eating another human being.

Science will pioneer a device which lets a horse mate with a whale, creating the first whorses. These remarkable creatures will then be killed in commercial whaling ventures. Some will be killed illegally and sold as knockoff high fructose corn syrup. They will not be used much for riding, as their blowholes will prove too tempting a prospect for lonely cowboys in the vast desert biomes of the future.

The frontiers of space will briefly be within reach as man takes to the stars to chisel out a new destiny in the form of interstellar travel and terraforming. This will cause great confusion when the first space faring travelers mistakenly land back on Earth under the assumption that it's an entirely different planet, renaming it Earth 2 after their home planet in the process. Eventually the new settlers wipe out the indigenous population of Earth 2 and set about the task of recreating the comforts and amenities of their home planet.

These and many more wonders await us in the wonderful world of tomorrow!

Meanwhile, in the Daily Dirt...

Well what do you know, there is a Daily Dirt thingy here!