Dear Mr. Mayor: Please Do Something About the Pirate Ghosts 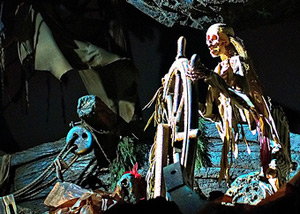 I don't like writing you unless it's absolutely important. Well, this is important. For the last two days the town has been under attack by what appear to be ghostly apparitions. Judging by the fact they are sailing over land in a semi-transparent wooden ship I think we can safely assume these are ghost pirates.

This is a serious matter. I think the townspeople will all agree that issues like potholes can wait. Mayor, it is imperative you address the pirate situation immediately and mobilize necessary emergency services to help the victims. Failing to take charge and show strong leadership could cost you the next election!!!

Thanks for inviting all those undead pirates into our town. They've kidnapped half the Fightin' Cougs causing us to forfeit a key game against Welpsburg. Way to give this season a blackeye.

Do your job and run these pirates out of town, idiot.

I've long enjoyed pirate related fiction. There are many great graphic novels and web comics I would be happy to refer you to. There are also a few good movies on the subject that showcase the grand adventure and spectacle of high seas buccaneers. I was really excited when I heard spectral pirates were in town, as I expected fully to be able to bust out all my favorite pirate expressions. Instead I had to run for my life as these maniacs went crazy stabbing and mutilating people left and right. Not cool. I think we should call them something other than "pirates" because they really give the whole profession and history of piracy a bad name.

Obama's selling some premium snake oil and the American people are paying top dollar, right Mr. Mayor? That renegade Kenyan has the national debt soaring, and you're following his lead by letting ghost pirates settle an ancient score in our city. Liberal politics as usual.

Last time I checked these pirates weren't flying the American flag and this town was located on American soil. You better see what that equation equals and do the math before us voters have you Shanghaied to Kenya.

I've been trying very hard to see the positives of having a crew of murderous ghost pirates sailing around town in a ship that can move through solid objects and cannot be damaged by bullets. I've thought long and I've thought hard, Mr. Mayor. The simple fact is I don't see any good coming out of this situation. So it falls on you, our duly elected leader, to stand up to the pirate menace and say "Not in our Town."

Be honest, Mr. Mayor. The paper says the pirates are here because you plundered their cursed doubloons. I wouldn't put it past you, as you've had a history of inviting trouble into our town. It certainly would explain why that ghostly ship full of skeletal pirates is sailing around town are climbing down to rob, stab and kidnap townspeople.

Man up and give them back their damn pirate booty before it causes this town anymore damage. We've got problems enough as is with all the potholes. I do not condone a mayor who abides pirates, much less inspires brutal pirate revenge by taking something man ought not to take.