"Your cat pictures are so kawaii (cute in Nihongo (Japanese (the official language of Japan (^_^))))! Awesome update!"

"LOL! My cats are just like that! Did you steal my cats?!? Great job!" 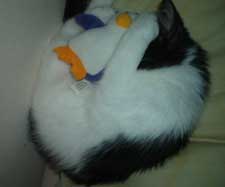 Awww. This has to be worth like 20 emails right here.I can see it now. Messages of praise, congratulations and solicitations for sex, all for my personal update about my pets and/or kids. Forget about trying to write insightful and humorous commentary on the Internet, video games, water fowl or whatever the hell this web site is about. I've written about those things and quite frankly, nobody cares. No emails, no threads, no praise, no soiled panties sent to me by mail by adoring female readers, no nothing.

If I sound a bit disgruntled then that's because I am. Ever since that damn Front Page Forum opened you end up looking like a douchebag every time nobody makes a thread about your update. I don't slave over a hot CMS because I like you people. I don't have a passion for writing or making people laugh. I do this for undeserved praise and attention from strangers on the Internet. Since nobody is reading my updates or making threads about them, my therapist says it's time to do something drastic. It's time to play the race card.

You see, my name on this web site is "Hassan Mikal" and because of recent world tensions many people assume that I am a terrorist. In fact, Something Awful readers tend to avoid my updates because they think they are suicide bombs disguised as bad Internet articles. Yes, my updates bomb, but in a different way. The tech guys at SA have run virus scans and assure you that there is zero explosive material in my updates no matter how hard I try to cram it in there.

The other half of Something Awful's demographic just plain doesn't like colored people. Let me put your fears to rest. I am not Middle Eastern, or whatever the hell ethnicity this name is supposed to represent. I am actually just another white nerd who likes video games just a little bit too much, just like the rest of you! You can feel comfortable around me and even move in next door to me now.

You see, I had to pick a pseudonym because I work at Nintendo of America and unlike some people I am smart enough not to let my bosses find out I work for an evil, sinful web site such as Something Awful. I do drugs, listen to rock music, and play Sega Genesis, all things my Nintendo overlords would fire me over if they found out. 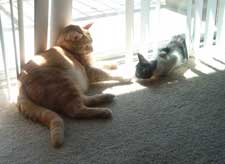 Two cats? Twice the emails!Since the only kind of update that actually elicits a response are good ones and articles about pets, I am forced to write an update about my two cats and the many adventures we have ignoring each other.

My girlfriend and I adopted a cat a few years ago as any proud white couple would. We adopted a fat orange adult tabby that took after his old owner, a fat pale goth chick. We drove all the way to Los Angeles to pick him up and when we got there had to wait half an hour for Bat Woman to pry him out from under the bed.

After the cat saw that my girlfriend and I weren't wearing black clothes with purple eyeshadow nor were we posting bad poetry about our black hearts and painful existence enduring 1st period English, he immediately jumped into the box and happily went home with us. Another day in that West Hollywood hell and he would've been dinner. I only assume because the goth woman was so exceedingly large and I think that any rational person would expect that a woman of such caliber try to eat a cat at least once in her life. If anything we saved his life.

The cat was already named "Pancake", which we thought was a pretty dumb name to begin with, but we decided that it would be much too stressful for the poor thing to undergo a name change so late in life. It might be interesting to note that we are very stupid people and believe that a pet might prefer one name over another. 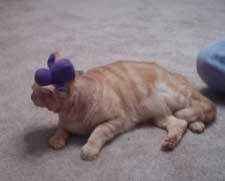 The best way to introduce a cat to a new home is by throwing stuff from the new home at it.Suffice to say we adopted a very traumatized cat who was frighteningly cautious of anything and everything in our apartment. The cat couldn't take two steps without peering behind him to make sure that damned woman wasn't chasing him with a bottle of barbeque sauce and a fork and spent most of his time under a blanket. Based on his behavior we think the cat was abused at some point in his life and might have gone through some traumatizing situations. Lucky for us our apartment caught fire three months later with the cat inside who suffered burns to his paws, ears, and lungs. Oops.

Having acclimated to the new apartment, he now lays in the corner and sleeps all day while suffering through night terrors, occasionally emerging to eat a morsel of food and curse our souls. Since we screwed the first one up so much, we decided it was time to try again, this time with a kitten.