A Most Magnificent Ship

Aye, by all accounts she was lovely. Th' most magnificent vessel ever constructed by human hands, or so they say.

Her hull was crafted from th' finest porcelain. Thin as a deckhand's willpower on shore leave in Sexy Gambler's Cove, it was. They say that if you could have looked at a slice of it side-on, it would have seemed to vanish even if you wasn't thick-headed with a belly full o' booze. Imported from the Fragile Lands, that hull was. A stack of twenty was ordered, in fact, but only three made it through the delivery in one piece. Two shattered the moment they were removed from th' enormous crate.

Her sails could have turned any old leaky rowboat into a spectacle that folks would have lined up and parted with coin to witness. Made entirely of th' thinnest gossamer imaginable, the fabric seemed to melt into the sky on a sunny day. To run your grubby digits across the surface of her sails was to dissolve th' fabric into crumbling wee flecks o' nothing. 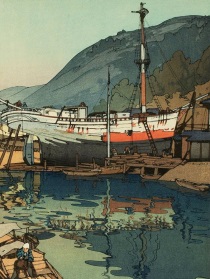 Even her wheel was exquisite. Encrusted with fist-sized gemstones, its structure was made of pure gold. Those of you who know something of precious materials may be familiar with gold's tendency to rest at a malleable state. Though it certainly twisted and drooped in th' sun's heat this was surely th' most luxurious wheel to have steered a vessel on land or sea.

No expense was spared. Each of her eighteen cannons was made of highly flammable Mirkwood paper, th' rarest in the world, folded by a legendary clan of monks who only opened up their compound doors to accept one outsider's project every three hundred years. In place of grapeshot her hull was packed with thousands of silk-wrapped phoenix eggs that served as ammunition. These eggs were terribly unstable. A slight jostle could have released th' white hot fire contained within and set off a chain reaction, but all beauty comes at some cost, don't it?

For all that poshness, nothing about her topdeck seemed unusual. Until you took a closer look. Though its surface appeared to be your typical grid of planks nailed into place, th' topdeck was actually one large piece of canvas. It had been painted by the Master Artist himself over the course of a decade, painstakingly recreating the appearance of a perfectly normal surface. A daily coating of liquified unicorn jelly (itself very flammable) kept th' painting in tip-top shape.

Even her crew made for a most unusual sight to behold. They had delicate features, and all of them held still in dramatic poses. These curious folk never moved, partly because they did not wish to betray their appearance's dazzling effect on viewers, and partly because their bones were so easily broken by th' smallest of movements.

As far as anyone could tell, she was th' most perfect ship that had ever been built. Thus it came as a surprise when she met with a most unfortunate fate.

On the morning of her maiden voyage she sat proudly on th' drydock, glistening and sparkling and what have you. Not a single scratch was taken as she eased down the ramp. It was a perfect launch. Only, some fool had installed that drydock in th' wrong direction. Instead of slipping gently into a rivulet of calm water, Turgid Blurf was deposited in an enormous patch of quicksand which pulled her under within moments.