To be successful, an American restaurant needs two things: an emergency exit, and plenty of corporate warmth. Customers may come for the excitement found in discovering one of three black olives hiding in their table-size salad trough, but stay for the various pieces of Americana that warm the heart and cover up building code issues. Please check out our newest selection of wall garbage perfect for placement near your Sundae Bar, Jell-O Shooter Lagoon, or baby changing stations. 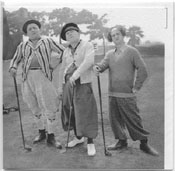 Those comedy oldsters are at it again! And even though no one remembers their names because they haven't been on TV in over 20 years, this framed image will vaguely remind your guests of their many off-the-wall adventures. Encourage your servers to converse about this legendary threesome's most famous mishaps, like the time they couldn't move that piano up the stairs, or when they were hanging off the hands of that massive clock, or the one where all life on earth had ended and then their glasses broke. These characters make up the backbone of American comedy, and will certainly remind your employees that the best medicine is laughter, especially if you aren't providing health insurance. 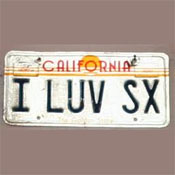 No matter where you come from, you know it's all happening in sunny California. The greatest TV shows, the hottest movies, the most exciting wildfires: it's all taking place in the state formerly governed by a guy who got famous by pretending to be a metal skeleton. Every day is a party, and every night's an adventure. Fast cars, full of sexy babes, required by the law to display their legal driving status. And that's where we come in. Each and every one of our authentic California license plates comes from genuine Los Angeles Police Department auction surplus from 1987-1989. This way, you can be sure that your authentic chunk of California will delight the majority of your customers destined to die no more than five miles from their maternity ward crib. 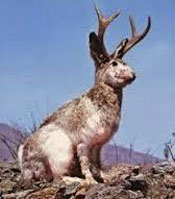 Centuries of observation have taught us that children take delight in nothing more than the desecration of corpses. Wall Trash Warehouse has taken this to the next level by killing and combining two animals for the sake of having straw wrappers shot into their gaping, taxidermied mouths. While waiting for his meal, Junior will love stroking its realistic fur, and filling its torso with loose change and pistachio shells. Sister will spend hours turning over in her head what dead animals we stitched together to create such a monstrosity -- but we're not telling! Mostly because yanking those horns out of a baby elk is not something that should be described to the faint of heart. Extra baby elk horns available upon request. 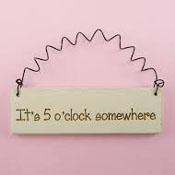 Whether you're in grandma's kitchen or a principal's office, you're bound to see a delightful and candid message hanging, displaying a homespun message about the rigors of everyday life. And when your customers see vivid reminders of their childhood placed on your walls, mixed drink sales increase by 34% -- and if you've been using fermented Hi-C like most of the big chains, you know that's pure profit. Complete the effect by framing your message of choice between four checkers boards, and watch those secretaries only reconsider choices after the sixth fuzzy navel. After years of campaigning, we've finally forced "git 'r done" into the public domain, so there's never been a better time to take advantage of our most popular model since our "here's your sign" sign. (Now available as special edition sawdust in our Graduation Party Package.) 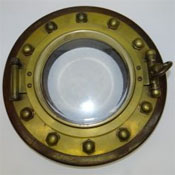 Let's face it: we've all been on bad dates. And sometimes, the only escape from an awkward situation can be found in being obliterated by the water pressure miles below the ocean's surface. While we can't offer the peaceful release of filling your lungs with salt water, here's the next best thing. Nail it to any wall, then sit back and watch the fun. Pathetic singles will have no choice but to stare longingly into its reflective surface while witnessing the effects years of starters 'n sides have had on their bodies. Includes latch feature for increased claustrophobia. After the recent closing of several Long John Silver's, we have plenty of inventory to burn. Our surplus dock planks provide plenty of diverse walking surfaces for customers and a reliable self-defense instrument for night managers that isn't admissible in court due to certain maritime laws.