The Sin to Disaster Flowchart 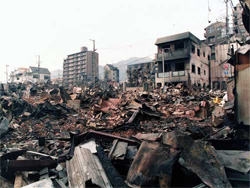 As you may know, all disasters -- natural or man-made -- are entirely the result of God's poorly-aimed vengeance against some sin or sins that happened hundreds, if not thousands, of miles away. For example, the passing of Barack Obama's polarizing health care bill undoubtedly caused God to unleash some volcanic action on Iceland as if He were a bored eight year-old playing Sim City 2000. And that recent BP oil spill? That's simply the result of an 80s Night that got a little too rowdy in a Flint, Michigan gay bar. If you're worried about how your sinful deeds may cause untold suffering to fall upon complete strangers, please consult the following chart; it's been approved by Orel Roberts University, Pensacola Christian College, and that bearded guy at the end of my block who spends most of his day screaming at trees.