You ask how h 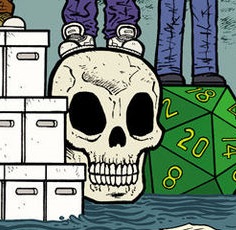 Tucked away between his straw bed and the cobblestone floor you discover a wretched assortment of role playing books and a bag full of twenty sided die.

He used to come straight home from skeleton warrior school every day. After pouring himself a flagon of milk, he would quietly set to work on his homework assignments in the living room. Now he arrives much later in the afternoon and refuses to explain where he's been. He just slinks into his room and slams the door behind him then turns on that rap music.

On Halloween he gets caught throwing drake eggs at the house of your kindly druid neighbor.

The margins of his notebook are full of graphic illustrations. One chilling drawing depicts a skull with skin wearing shades as it smokes a weed cigar. Another shows a female skeleton with its arms raised above its head, pushing her impossibly huge rib cage forward.

He never seems to stop playing video games. Super Cartilage Brothers, Call of Barrel, Elf-Life 3. You name the perverted filth and he's played it, sitting very close to the television despite your repeated warnings.

After his aunt spends all that time knitting him a lovely shield cozy he simply tosses in a drawer and writes a perfunctory thank you note.

When politics come up at the dinner table, he interrupts with bizarrely naive opinions. He wonders why there has to be an eternal war with the orcs. He asks how we know the bottom of the dungeon is worth protecting if we've never been down there. He insists that many of our problems would be solved if we tried talking to the cave troll. Who is soiling his mind with these ridiculous thoughts?

One day as you walk into his room with laundry (a freshly dusted scabbard and a helmet with broken horns) you catch him at his computer typing "good pictures of sexy babes" into the search bar.

When you casually ask him if he's heard of any good psycho blood cults lately, he seems confused.

After a heated argument he shouts that he can't wait to turn seventeen and move into a fancy barrel.

His best friend has a tattoo, is a barbarian. On several occasions you try to gently explain how this is unnatural. Each time he flips out and refuses to listen to reason.

He shows little interest in vegetables and seems uncomfortable during family outings to crowded places full of skeleton warriors in his age group.

You have to remind him several times before he finally - and with a theatrical sigh - cleans his room. If you don't get on his case his floor remains positively littered with superhero comic scrolls, discarded tattered cloaks, piles of gold coins, and cobwebs.