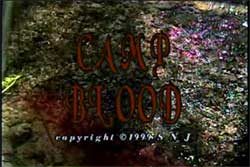 Overview: A lesbian in a Slipknot clown mask runs around and stabs people for a while.

The Case For: If you're an aspiring horror director and you want to see a moving list of things not to do, this movie is for you.

The Case Against: If I wanted to see a bunch of community college kids wander around and stab each other I'd go to a Detroit McDonald's. 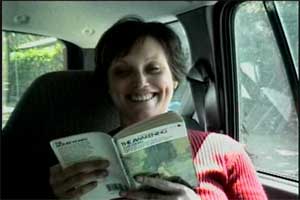 While watching the movie I thought about what it would be like to take this woman to bed. Then I tried to drive a white-hot coathanger into my brain to stop thinking like that.“Camp Blood” is a simple film. Not simple as in “understated” or “watchable,” mind you: Instead, “Camp Blood” is simple like that retard they hired to check air pressure in tires at the gas station before he got caught peeping at little girls in the bathroom. The movie is so awful, so unwatchable, that by the end you’re surprised Writer/Director Brad Sykes managed to film the whole thing without accidentally jamming the camera up his ass.

Let me explain something: “Camp Blood” manages to fuck up before it even finds its way to the DVD player. This must be quite an accomplishment for Sykes, who undoubtedly has management aspirations at the Movie Gallery that recently hired him. The copy I rented was part of an “Ultimate 3D Horror Collection.” After spending an hour and 15 minutes with the movie, I’m pretty sure the word “horror” should not be anywhere near it, no matter what the box says. There are plenty of other emotions the film invokes, such as boredom and confusion, but the most terrifying experience I had was a feeling that the video store clerk would mock me for renting it after I left.

The other issue is that there is absolutely no reason for this film to exist in two dimensions, let alone three. Nobody would watch “Camp Blood” and think seeing the characters six inches away from the screen would improve the experience. In fact, as far as gimmicks go, the movie could make money spit out of my DVD player every time I played it and I’d still never watch it again.

The movie doesn't get any better once you actually start watching it. It opens with two bird watchers roaming around a forest. We don’t know what bird the watchers are looking for, or why they’re in that particular forest, since the dialogue between the two has more stuttering and mumbling than a heated argument between Hugh Grant and Woody Allen.

But they don’t look for birds long. Oh, no. After some of the most awkwardly-read sexual dialogue I’ve ever heard, the two get down to the real business at hand: Dry humping on the forest floor. Apparently the community college Sykes flunked out of did not offer a basic human biology class, since the two simulate some kind clumsy sex for a good three minutes without ever removing their pants. 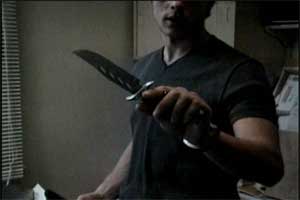 "This knife has saved me from plenty of bad situations. Like my acting career."If you’re still reading this, I want you to skip past the next part, since I have a personal message for Mr. Sykes.

After watching “Camp Blood” it has come to my understanding that you do not understand the basic mechanics of sex. Most people do not, in fact, enjoy rubbing khakis on piles of leaves and twigs, and even fewer like it when the woman on top looks like she is simultaneously laughing hysterically and taking a gigantic dump.

Please note that I will not teach you how humans really reproduce, since I do not want to be responsible for your children if they decide to make another movie like “Camp Blood.” All I will say is that it involves throwing a plugged-in toaster into a bathtub.

Unfortunately, sex is not the only thing that Sykes does not understand. Among other things, like “directing a movie” and “not being a total fuckup at everything,” he also has trouble grasping the fine art of mood music. After the bird watchers are killed by the most generic killer in any slasher movie ever (a person wearing a clown mask and a blue jumpsuit), we are shown multiple shots of a suburban neighborhood. Only then does the “horror” music (which sounds like a synth organ being mashed on by an autistic kid) kick in.

After a few more shots of the neighborhood, we are treated to a shot of the ugliest woman in the world, Tricia, getting in the shower. I am not one to judge a person by her looks, seeing as I resemble a ball of dough that has been rolled in a pile of hair, but here’s a tip for aspiring directors: Make sure your lead female doesn’t induce a person’s gag reflex every time he looks at her.

After a (thankfully) no-nude shower scene, Tricia and her boyfriend, Steve, discuss their upcoming camping trip. Of course, they are camping in the woods where the bird watchers were killed, and of course, Steve writes it off as nothing. They have the most boring argument ever caught on tape and are picked up by their two friends, one of whom looks like a very angry Doogie Howser.

Here’s where the film hits a crossroads. Sykes could have taken two paths, namely “starting the murders” or “letting things drag on for 45 more minutes with shots of people walking around in the woods.” Unfortunately for everyone, he chose the latter. The group meets up with Harris, their sexually ambiguous wilderness guide, and the audience is treated to such interesting scenes as the group walking over some rocks and the group setting up a camp. And then, all of a sudden, it’s night time. The group is putting up tents and then they’re sitting around a campfire. And here’s where the movie becomes literally unwatchable. 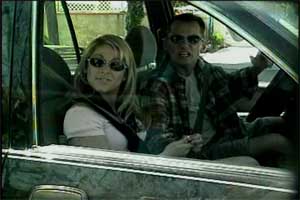 Oh, angry Doogie Howser, what comically enraged faces won't you make?Brad Sykes and artificial light do not get along. If “Camp Blood” is any indication he is terrified of it, and will go to any length to avoid it. The “campfire” scene, which is nearly ten minutes long, is made almost entirely of black screens and muffled dialogue. When the camera does pick up a fire-illuminated image, the camera, in an attempt to compensate for the light, begins flickering and rolling like a broken television.

In order to forget the crushing depression spurred by their failed acting careers, the group decides to tell ghost stories. Or summaries of ghost stories. Here’s an example of one of their tales, as told by angry Doogie Howser (AKA Jay):

Jay: What about that one with the escaped mental convict with a hook for a hand?

Rest of group: Oooh, that’s a good one!