1. Call Meeting to Order Mayor Fetor called the meeting to order at 1 p.m.

OLD BUSINESS
3. Blood Sewer Efficiency
Spookyville Blood Sewer Superintendent Robert Knives-for-Hands reminded the Council of an impending vote on a new blood sewer pump, which would allow approximately 35% more blood to gush from manholes, cracks in the sidewalk, and other holes in the ground. He discussed the potential benefits of a new system, and said he did not mind the extra work so long as “the ground looked like a sanitary wastebasket at Lilith Fair.” Knives-for-Hands then apologized for the decline in Wailing and Screaming production, claiming the Blood Sewer Department was looking to hire a new Head of Torture and Disembowelment after the next budget allocation.

NEW BUSINESS
4. Resolution Barring the Sun from Spookyville and Surrounding Areas
Councilor Vlad Childkiller expressed an issue he had regarding the new meeting time. He cited a rare condition, which turns him into a pile of ashes and tiny bones every time he comes in contact with the sun, as the source of his concern. Mayor Fetor said he accidentally left his brain on his bathroom vanity the morning he set the agenda, then apologized. The mayor then asked someone to shut the blinds so Councilor Childkiller could remove the trash bag he was wearing over his head.

After some discussion the Council formally banned the sun from Spookyville and surrounding areas. The decision was unanimous – Councilor Chainsaw Maniac cast an absentee vote for Councilor Angry Skeleton by waving his disembodied hand in the air. Councilor Maniac then presented a written apology from Councilor Skeleton for missing the meeting, carved into the ruddy, plump backside of a preschooler someone found in a ditch over by I-46. Mayor Fetor accepted the apology and said he’d hang it next to his formal indoctrination documents, which he believed might have been etched into the preschooler’s mother’s forehead.

Councilor Terry Bleeds-from-Ears asked the council how they planned to keep the sun out of Spookyville. Mayor Fetor recommended the council contact the crazy old scientist on Holloway Hill before the next meeting. He also said that the sun could be fined every day it appeared in Spookyville until the Council figured out a way to forcibly remove its shine, possibly by dousing it in a combination of goat blood and road tar. Councilor Childkiller thanked the Council for its quick action.

5. City Job Opening
Mayor Fetor said the city was in urgent need of a creepy old man to fill a vacancy in the city’s work force. The job, located at the gas station on the desolate stretch of highway leading into town, is open immediately and applicants are encouraged to submit resumes as soon as possible. Fetor said the ideal candidate would speak in a thick, stuttering, southern English dialect and have the general appearance and demeanor of a terrified cocker spaniel. Applicants MUST be able to direct unwitting vacationers down a shortcut that winds by the old car graveyard in the forest. Ability to hide spike strips under piles of leaves in the road is a plus, and additional consideration will be given to applicants capable of spraypainting “LAST STOP – 500 MILES” on a sheet of plywood. Applicants will be asked to take an aptitude test, which involves stealing as many pairs of panties out of a camper as possible in five minutes and taking beatings from the one person who inevitably escapes our clutches.

6. Questions Regarding Efficiency of Maniacal Crab Robots
Mayor Fetor said he had received several letters regarding the work ethic and basic maniacalness of the town’s newly purchased Maniacal Crab Robots. He said the robots, designed to scuttle around town “in the interest of terror and mayhem,” showed reluctance to split people in half like fireplace logs and generally were not doing a very good job with their appointed duties. He did claim one standout, Maniacal Crab Robot #642, had picked up the slack for his peers and in fact had created a stack of severed torsos higher than the county clock tower. In general, however, he said the robots were wasting township time and money.

Councilor Singing Little Girl with Kitchen Knives Sticking out of Her Eyeballs recommended a change in the robots’ design to ensure maximum efficiency. The current robots use four legs to walk and two to cleave bodies, as shown in this illustration: 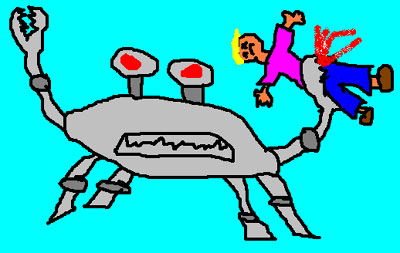 The councilor then showed a proposed change in design: 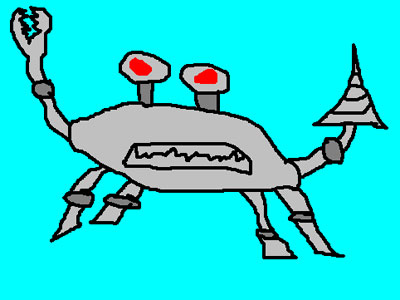 The new drill arms would allow the Maniacal Crab Robots greater flexibility in their homicidal programming, she said, and would also encourage them to drill deep into the ground, creating a number of beautiful blood geysers around the city. This, she said, would appease the Undead Chamber of Commerce, which was looking for a new tourism angle after the condemnation of the Giant Meat Grinder that Occasionally Eats People.

Deputy Mayor Severed Foot in a Jar tapped out a speech in support of the councilor’s proposal, and again, the vote was unanimous. All Maniacal Crab Robots were asked to report to the county highway garage so they could be fitted with serrated drill arms, as well new firmware.

7. Public Safety Notice
Councilor Lex Maggotskin asked that teachers refrain from giving their students scissors in the classroom, since scissors can easily be held in the sign of the cross, which can cause several injuries, including blindness, severe burns, and impotence. He reminded the council that the Spookyville School Corporation has a zero-tolerance policy regarding dogmatic memorabilia and that offenders can be suspended, expelled, or thrown into the lake of fire and dog entrails over by the skating rink. Contractors were also asked to stop constructing buildings using cross-shaped supports to help eliminate housefires and holy beams of light that eradicate entire sections of town.

8. Spookyville Parks and Rec Moving Along
Parks and Recreation Executive Patricia del Muerto said plans to build a new playground were going well. The stakes surrounding the site were recently decorated with human heads thanks to a generous grant from the city, she said, and the pea gravel littering the area is set to be replaced with used hypodermic needles within the week. Del Muerto said the Parks and Rec department is still looking for volunteers to sharpen the edges on the playground equipment and decorate the exteriors with lead-based paint, and that she plans to ask the sex offender wing of Spookyville Jail for some parolees to help quicken up the process.

Del Muerto also said Parks and Rec is moving quickly towards its goal to repopulate and release their collection of endangered Spookyville Giant Spiders. The beloved insects are “breeding every day” and will soon be able to return to their normal mating grounds, i.e. the mouths of sleeping tourists and other visitors. Del Muerto said she expects the population to really pick up once the spiders’ eggs are allowed to hatch in the throats of tourists instead of incubation pods, and that the large, electric-powered pods themselves would make great bathroom caddies at area retirement homes when the stock is released.

PUBLIC COMMENTS
9. Resolution Regarding Appearance of Bodies in Parking Lots
Local businessman Veiny Dave took the floor before the meeting adjourned. Dave, owner of the strip mall located at 6124 Hwy. 666, has taken issue with the thousands of bodies that have appeared in his parking lot over the past few months. According to the entrepreneur he spends half his day hauling bodies out of the lot (some of which stick to the asphalt in warmer months) around to the back of his strip mall. The hole, he said, is “starting to smell like death died”, and the packs of large, rabid dogs circling the lot looking for a meal are scaring his customers away. On top of that, his health insurance rates have skyrocketed because of all the claims his employees submit, which include everything from nausea from the smell to a strange disease “that kind of looks like leprosy, only a lot meaner”.

The Council unanimously voted to loan Dave a large thresher, which would liquefy the corpses and spray a fertilizing mist on the Eternal Pumpkin Patch across the street from the strip mall. Mayor Fetor also noted the thresher “has a cat or something caught in its motor”, and the constant screaming coming from the machine would undoubtedly scare the ravenous dogs from the parking lot. As an added bonus, the thresher could be used to cull the dogs once or twice a week, provided Dave warned customers on the days he sprayed rabid dog blood all over the parking lot.

10. Adjournment
Mayor Fetor thanked the attending residents for making it to the meeting Attendees were asked to be careful going home, especially those living downtown, as the armless creatures in the abandoned storefronts were going stir-crazy and headbutting the windows with alarming frequency. He reminded the attendees that most salesmen in town had two arms and pink (not gray) skin, and that a common greeting was “welcome to our store”, not “blagh blee bluuuuuggghhh”. The meeting then adjourned.