Of all the outlets to appear in, why choose this website? Seriously.

Couldn't you have gotten a MySpace? Everyone's got one, you need one. You're not internet savvy until you get one. It's like a LiveJournal, but it looks different.

As you know, Something Awful has not been funny since it stopped running ICQ pranks and Jeff K. articles. These guys obviously need help before they resort to making up another hurricane Katrina relief publicity scam and I was planning on answering questions on the internet anyway, so I figured I'd save two birds with one stone.

If you created the universe, where did you come from?

yo whats the stupidest thing you ever created dogg

That's a tough question to answer, as I like to think that all of my creations have their own inner beauty or greater purpose.

Have you ever seen a flower-pocked valley just after a summer rain, a beautiful rainbow forming in the fleeting mist as a sunbeam breaks through the clouds and alights on a butterfly landing on the nose of a baby fawn? That's pretty gay. If I had to take anything back I guess that'd be it.

Also, Quizno's is pretty nasty. It's like all the employees secrete massive amounts of baby oil through their hands and no one wears gloves. I don't want to lube my throat and digestive track for some bizarre alien sex act, I just want a roast beef sandwich. I'd probably take that place back too.

Is the Bible meant to be taken literally, or is it more of a collection of tales that convey moral messages?

Actually, I have no affiliation with the Bible whatsoever so I can't really comment on that. The only book that comes close to capturing the truth about myself and the universe is the novel "Dangerous" by Fabio. 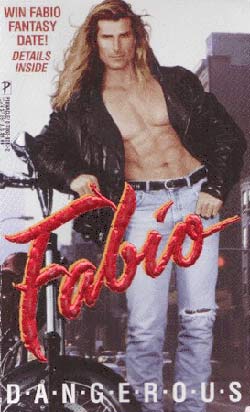 Coming soon to the nightstand drawer of every hotel room in America.

I find it interesting that you've chosen to answer questions on the internet instead of through television or telepathy. Are you a computer enthusiast?

Totally. You could say I'm a "computer nut"! I've got this computer called an Intel Inside and it's pretty powerful because it connects to the internet really fast. I'll add you to my email list, I constantly forward random jokes and pictures that other people send me to everyone I remotely know.

If you're here answering questions, who's driving the universe?

Some people point to a lack of flashy magic or the skies parting as evidence that you don't exist. Are you completely hands off, or does everything happen for a reason? If so, how do you do it if we can't see any evidence of your involvement?

Everything does happen for a reason, but I work behind the scenes to allow people to make their own choices in life without being directly influenced by my presence.

How do I do it? It's all midi-chlorians. Midi-chlorians are a microscopic lifeform that reside within all living cells. That pretty much explains everything!

I'm sure you get this all the time, but why do bad things happen to good people?

They don't. How's that wheelchair treating you? Maybe next time you'll think twice before forgetting to take out the trash after promising your mother you'd do it.

Are we alone in the universe?

Just about. There's a guy named Greg who lives on the planet Jahvlae-9 a few galaxies away, but he's a total dick.

What's Heaven like? Most people picture a city of clouds and no hardships, but I love the culmination of everything good and bad about Earth so that seems sort of emotionless and sad to me.

The ground is not made of fluffy clouds, but of artificial turf. I was concerned about it at first, but we haven't seen any fluctuation in hamstring injuries so far. The sky is a continuously looping lasershow set to Billy Joel's Greatest Hits.

When I designed the rest of Heaven I went with the assumption that everyone loves the safe and cuddly version of native American culture that was created to appeal to tourists. There's big plastic teepees and totem poles (with cute and funny faces instead of anything scary) all over the place, and everyone wears lots of turquoise jewelry. It's pretty great.

What do you look like? I picture you as a giant in a white robe and a flowing white beard with a face you can't look into because it's shiny as fuck.

16/F, tanned, blonde hair, tight bod, still have most of my teeth

Why isn't everyone good looking? It seems to me that being born with a funny face is a lifelong punishment. If you wanted to teach someone a lesson about humility couldn't you have done it without making 80% of the opposite sex unattainable to them?

It's not done to teach anyone a lesson, it's a necessity. If everyone was good looking then there would be no one to write humor on the internet.

So did people come from apes or what? I've been arguing about the subject of evolution for years on both sides of the issue, just to be an argumentative jerk. I'd sort of like to know which half of the time I was right.

While evolution is very real and all organisms adapt throughout the years, humans did not descend from apes. If every person alive today were to trace their genealogies back to the origin of the human species, they would find that they were all the direct descendants of Wilt Chamberlain.

We all know that one day our sun will die and wipe out all life on Earth with it, but when will this happen? I find myself looking up at the sky fairly often and wondering about it.

There's no need to be concerned! It won't happen in your lifetime so don't worry about it. The sun doesn't die until November of 2010.