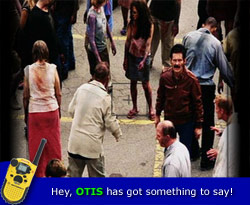 Maybe this picture will teach me how to carry more. Everything has gone wrong in Willamette, Colorado. This gingerbread town of do-nothings has suddenly started killing each other, and now there's 50,000 of the living dead out to get about a hundred of us still left alive. My name is Frank West, and I arrived here in a helicopter less than eight hours ago. Since then I've seen men, women and children torn limb from limb and devoured by this ravenous horde of the walking dead.

I'm barricaded up in the Willamette Parkview Mall with a handful of survivors. I'm a reporter, and I guess this is my story.

I suppose I should start by telling you who is with me. There is Brad and Jessie, a couple of mysterious agents from the Department of Homeland Security who seem to be running the show as much as anyone. There's Otis, who is a janitor or something, there's Carlito, who I met on the helipad, and then there are these two fat people who I don't know that just stand around in a back room crying all the time.

The real brains of the operation is Otis. When I'm not chasing after Brad or Jessie, and usually while I'm chasing after them, Otis calls me to let me know about the other survivors he sees in the mall. He's a really honest sort of guy. Really seems to care and if anyone can help me sort things out it's going to be him.

Otis put me on the trail of a photographer hanging out in a coffee shop on the second floor. The guy was giggling like a girl when I found him and he didn't seem to be too bothered by the zombies walking around the mall. He said I was a shitty photographer. Hey, maybe I'm not good at taking erotic pictures of pantyhose on dead bodies, but I didn't really want to have that conversation. This asshole didn't care, he insisted I take pictures of him while he ran around cackling like a moron and doing jump kicks through zombies.

I managed to get one good picture of the guy, but that wasn't enough. With zombies closing in on all sides he wants me to Robert Maplethorpe his ass or something. Right as I was about to take a second picture Otis calls me again. He just wanted to talk. I said it wasn't a good time and put the radio away. I line up for another shot and he calls me back. I answer before looking (big mistake) and some rotten cop with a bloody face takes a nice chomp out of my shoulder. I manage to throw the stinkpig off of me and nail him with a baseball bat, but I catch the amateur photographer in the process.

While Otis is bitching me out for hanging up on him, I'm standing there holding a bloody wound on my neck and trying to fend off some crazy fucking goofball with a camera. Otis means well, but he could pick a better time and place to call me. I mean it's not like he can't see what I'm doing on the security monitor. Anyway, I murdered the photographer with a lead pipe. I guess I could have finished taking pictures for him, but by then I didn't care and I figured no one would really miss the jerk. 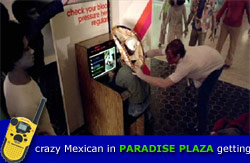 Maybe if I make it there in two seconds I can save him! How do these motherfucking things keep filling up the elevator to the rooftop? Jesus Christ can't I just shove boxes in there so there's no room for them or something? I tried filling it with mannequins but they were there anyway. I guess some kind soul came along and cleared everything out so they'd have enough room to fill the elevator. It was probably Otis.

I swear, I thought that guy was a good guy at first. Now I'm beginning to have second thoughts. He has a real knack for calling me at the worst possible moment. Got some jerk trying to bash your face with a severed hand? Otis calls. Some construction worker trying to eat your guts? Otis calls. Trying to skateboard through a mass of zombies so thick you could use them to water-seal a boat hull? Otis…well, you know where I'm going with this one.

Anyway, this time I'm headed out to find Brad. Tits, who you might remember as Jessie, sprained her little girly ankle and is recuperating in the security room while I risk disembowelment to help out Brad. I think I'm beginning to understand how the DHS fucked up Katrina relief so bad. Jesus. Besides, she's always cockblocking my photography. I just want to get a shot of those enormous hooters because I know there's a judo throw or face smasher attack in it for me, but she's always got to have a cabinet or a coffee cup in between me and the mams.

That fiendish taskmaster is calling me again from his ivory tower up in the security room. It's weird, he always seems to see what's going on through the security cameras, but every time I'm up there he's just standing around a vent. Maybe that explains why he always manages to call me at the worst possible moment. Like just now. That guy I met on the helipad, Carlito, was going nuts in the food court and trying to kill me and Brad. The crazy son of a bitch had a machinegun and hand grenades and apparently a bulletproof face. Christ, I must have shot him in the head twenty or thirty times. 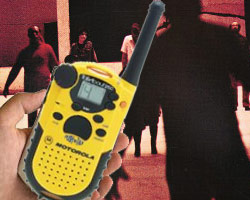 Little busy right now, buddy! Carlito is running around on the tops of the restaurants in the food court cackling and throwing grenades at me. I'm trying to keep cover and step out just long enough to pop a couple rounds into his face. Things are going pretty good and then out of the blue BZZP, BZZP! Otis has something to say!

I answer and of course immediately suck about ten bullets through my lungs, but that's fine because I'm a good photographer and some of my Pulitzer-worthy shots have made it so that I can absorb unbelievable amounts of punishment. Well, maybe not as much as Carlito, but I'm getting off track here. Otis is complaining about some woman he sees barricaded inside a jewelry store.

I'm like, "let me get this straight, you called me in the middle of a fight with a guy throwing hand grenades at me to tell me that you found a woman safely barricaded inside a jewelry store?"

There is silence on the other end for a couple seconds and then Otis just says, "yeop."

When it doesn't matter, Otis is a man of few words.

I finally found that dumb broad in the jewelry store. Otis called about five times while I was making my way there, so I got pretty beat up. I wish the goddamn zombies wouldn't knock the radio out of my hand every time he calls, because then he calls back just to bitch me out about hanging up. What can I say to him? "I wouldn't have had to hang up if you wouldn't have called just then!"

Anyway, this woman's baby or something got eaten. I don't know, I get pretty apathetic to these people pretty fast. I wasted way too much daylight talking to her and I ended up having to carry her across the courtyard of the mall just to get her to the security room. "Boohoo baby got eaten," stops having the same visceral impact when you're hauling one grande latte too much of woman on your back across three acres of zombies.

I'm beginning to think Otis is just messing with my head. He'll send me all the way across the mall, chopping through hundreds of zombies, and then right when I get to where whoever is supposed to be he calls me again and tells me they died because I was too slow. Why don't you get out here and save some of these people, Otis?!

When he's not laying guilt trips all over me he's telling me worthless crap like some roller coaster broke in part of the mall. First of all, what kind of freaking mall has a roller coaster in it? Second, I'm not going to fix your roller coaster, Otis.

Anyway, Otis sends me all the way across the courtyard to rescue some Japanese tourists hiding in a book store. It's night by now and all the zombies have glowing red eyes like night vision goggles from some bad action movie. They're tearing chunks off of me every time I turn the corner and Otis is paging me like a drunk making bootie calls. By the time I get to the Japanese people they're all chewed up and Otis is laying it on thick.

Christ, I'm a couple quarts low on blood and this guy is bitching me out for being too slow. And he's doing it right when a zombie lunges at me. 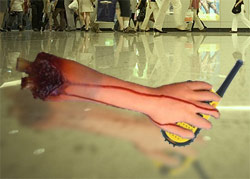 AUUUUUGGHHH!I desperately need to find some orange juice or potato chips. Anything to stop this bleeding.

I'm running low on soccer balls and I don't know how I'm going to make it back to the security room. The courtyard has been taken over by a bunch of persistent and crazy convicts in a Jeep and I look like a dog's chew toy. My baseball bats are all on the verge of breaking and I don't have the strength to make it back up to the sporting goods store.

I'm going to try to make a run for it using one of these shopping carts. Just push it as fast as I can and shove all of these rotted motherfuckers out of the way. One good grab and I'm done for, but it's my only chance.

Oh God, here they come now, I've got to fight my way over to that cart and- 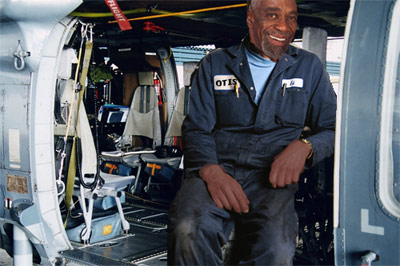