Of all the continents on Earth, it would have to be said that Asia is by far the most culturally mystifying. That's right Australia, when it comes to ancient culture, you're playing second fiddle to the wonderful world of Asia. From having a large, awkward alphabet with hundreds of symbols, to having large, awkward hats that look like cymbals, Asia is just about as foreign a culture as you can get to our "Get fat and die!" way of life. Us Westerners have little understanding of their ways even today, and many of us are fascinated by their history and violent, pornographic cartoons about alien rape or some sort of giant, world destroying little girls who eventually get raped anyway despite their planet crushing power. Many important things have come out of Asia, such as Buddhism, gunpowder, Alex Chiu, dishonor, and foot binding. But of all the many innovations made by Asia and the Asians living within, the most useful is surely the martial arts. 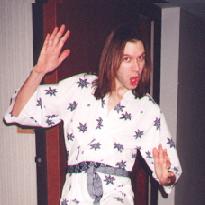 Only the Martial Arts can make you look this powerful!Who doesn't love the Martial Arts? Whether they're being performed on screen by Jackie Chan or being performed on your face by some irate chinaman, the Martial Arts are pure fun. But what are they really? According to the dictionary, the word martial means "Related to marriage or the married state," and the word arts is merely star spelled backwards...actually, no, it's "stra" spelled backwards. What does it mean put together? It means DESTRUCTION, BABY! Martial arts are the ancient art of hitting people in various, unfriendly ways to make them more bruised and uncomfortable than they were prior to being hit. Don't let the word art fool you though, because these are far deadlier than more classical art forms such as cartooning and pornography.

Before I discuss the martial and / or other arts any further, I'd just like to say one thing to you impressionable Something Awful readers: Violence isn't the answer. As an example, flash back to my days in class as a young grade-school hooligan. All the way back to the early 90's, a time when people like their Pepsi clear and their Desert Storm ongoing. This is an example that proves beyond a shadow of a doubt that violence isn't the answer...

Teacher: Scott, what is the capitol of New York?
Me: ...violence?
Teacher: No, violence isn't the answer. You fail.
Me: Shit! Is hatred the answer?

As you can see, violence will make you fail out of third grade and swear inappropriately at authority figures and authority figurines. The violent path is a dead end, an end which was most likely killed by all the violence that was around it rather than medical malpractice or a broken heart. So please, do not go about solving your problems with your fists, feet, elbows, or Chinese death locks. It may make you think you're cool, but it really will only make you look like a fool.

Now that that's cleared up, the main thing you need to know about martial arts is that it's all about solving your problems with violence, and looking cool by doing it. Some big bully is pushing you around? A few karate kicks can solve that! A neighbor doesn't like you dating his underaged daughter? Introduce that prude to the business end of your flying dragon uppercut! Other daily uses for martial arts include...

Save money on saw blades by breaking wood with your face

Save money on rent by breaking your landlord's face with wood

Keep in shape by reshaping opponents' bodies into formless goo

Instead of driving, why not hurricane kick to work? 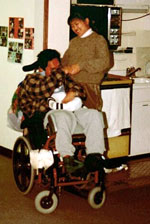 As you can see, the Asian woman in this picture introduced this man to her karate. Now they are the best of friends, and he went on to win second place in the special Olympics. All thanks to the Martial Arts!But how do you go about learning the martial arts? Well, there are several ways. For one, there are always schools. Avoid Dojos with names like "EVIL-DO" or "KARATEVIL," or "Captain Evil McEvilus' School of Karate for Villains." While their black outfits (called "Gis") may look cool to females (called "Girls"), they always seem to get defeated by some kid with a heart of gold and a will of steal. My advice would be to talk to any old Asian man in your town, as he most likely knows all sorts of Martial Arts that were created by his family and passed down through scrolls and ancient texts. Despite his crippled frame and paunchy, flabby appearance, he is almost guaranteed to be able to perform his art with the same athleticism he could when he was 20, if not better. He will accept you with open arms because of some vow he made to his dying father / brother / wife / cat years prior.

Another thing you might want to think about is what style you want to take. There are many, and each have a very distinctive feel to them. Karate is probably the most famous of all the Martial Arts. An Okinawan discipline, it is the art of punching, kicking, and hitting a person until they catch a bad case of the death. Kung-Fu is a Chinese art, and is different because it comes from China. Judo is Japanese, and I believe is some sort of a dish served over rice. While there are more styles, the names are more foreign than they should be and thus are hard to remember.

One group that owes everything to the martial arts is the film industry. While actors like Jean Claude Van-Damme and Steven Segal are masters of the acting craft, their movies just wouldn't be the same without the pulse pounding kung fu. For example, here is a scene from Segal's masterpiece, Under Siege 2, without the fighting... 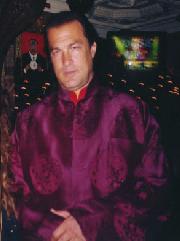 Please ignore the fact that Steven Segal is an idiotSegal: Finally we meet, I've been waiting a long time for this...
Random Villain: Indeed. I've heard much about you.
Segal: Enough talk! Let's see what you got!
Villain: Scissors!
Segal: Rock!
Villain: NOOOOOOOOOOOOOOOOO!!!!! (At this point, the villain's ship explodes, killing all but Segal)
Segal: I'm sorry, did I "Rock" the boat? *Credits Roll*

We have much to thank the martial arts for. It makes our lives safer, more interesting, and more dangerous all at the same time. From Video Games, to violent crime, martial arts has an impact on almost all of our modern society. Its a shame that most people reading this are too out of shape to leave their computer desk, let alone learn how to flying triple kick their way to success. You know who you are.