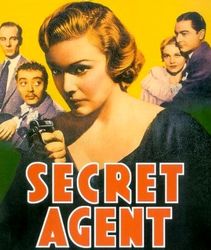 "Boy, I wish this article had pictures."

He looks up from the paper.

I am about to tell him, and then, for no reason I could ever explain...

"Nothing. Nothing, just doesn't sound like the kind of sight worth seeing."

"You're free to your opinion."

Then he reachs for the knife and cuts his sandwich in half in one slow stroke, pressing so hard I can hear the blade scraping the plate.

There's not much reason to talk to my contact at the Secret Agency anymore. For one thing, I don't think the Agency has sent me a single assignment since the first Bush administration. For another, he's just as old and used up as I am. I'm not even sure he knows where the Secret Agency has moved the Secret Headquarters this month, or any of the previous 50 months. Still, sometimes it's nice to get together and talk shop like there's anything about us that matters anymore.

Or on the rare occasion when I have a real criminal act to talk to him about.

"Listen, maybe I'm overreacting or jumping to conclusions," I say.

"God knows that'd be the first jumping you've been able to do in awhile." He kills the rest of his beer and has another one out before he even finishes swallowing.

"This is serious! Look at the facts."

And let's look at them. I get a call telling me about a murder of which no one but the killer could have been aware. It's the murder of an old enemy of mine, and, as I had subsequently remembered, an old enemy of Dr. Petrubia's. Who had been just this side of gleeful on reading the article of the death. I mean, the man did use to be an evil genius, emphasis here on "evil".

My contact lets out a gigantic burp and scratches his balls through his sweatpants.

"Yeah, what if? Could you move please, I don't think I've seen this Hell's Kitchen before."