That's right: The times are changing and so is our corporation. As I'm sure you are aware, recent totally baseless and unfair litigations have forced us to expand into other areas of the fast-paced corporate world. Since you, the stockholders, are our number one priority, we are inclined to inform you that State Og will be moving its ventures in a new direction: consumer entertainment and electronics.

Wait, wait. Before you leave the meeting and decide to drop your money on junk stocks like Google or – God forbid – Microsoft, please hear us out. We are a forward-thinking company, and instead of sitting on one good thing we like to move on to other, better things while we still have the money before these cocksucking corporate lawyers bleed us dry. I mean, whose fault is it that those grills exploded if you didn't connect Wire A to the correct port? I say it rids the world of a bunch of goddamn idiots who don't know how to do simple things like put grills together!

But I digress. The fact remains that State Og is moving forward, and those of you who decide to jump ship because of one little major restructuring are going to be crying in the end. Or now, if that idiot tech ever got around to mounting those pressure-sensitive turret guns. Mr. Johnson! Maybe you'd be more inclined to sit if you heard those turrets are capable of blowing chunks of meat the size of hamburger patties out of your morbidly obese body! That's what I thought. Sit down and relax.

Please don't just think we're taking your money and running! Oh, no. It's pretty hard to run when those goddamn SEC bloodhounds are breathing down your neck about "paperwork" and "earnings statements" every two minutes. Before this meeting ends we hope our vision of the future, the State Og way, will show you exactly how we plan to reclaim our market dominance. 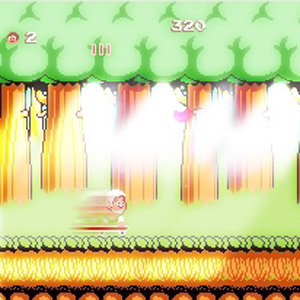 Staff artist Johnny "DocEvil" Titanium gives us a glimpse of gaming's future. It's so blurry it looks like your eyeshadow after the "Roseanne" finale, you pussy bitch.Ladies and Gentlemen, at State Og we understand the expectations and demands of today's gamer. After almost a combined man-hour of intense research with our Vice President's grandson, Steve, we have discovered the only two things modern gamers really care about: Motion blur and light bloom. And believe us, we have those two things in spades.

Let me introduce the OgBox Multimedia Gaming Platform. Thanks to the extreme dedication of our lead tech, Richard "Slobberbox" Kyanka, we have developed a sleek, stylish machine capable of creating the most advanced motion blur and light bloom physics known to modern gaming. How much motion blur and light bloom, you ask? Let's just say our titles will look like Tara Reid's birthday party at the Xanax factory.

But we know that those two things only matter if the system has solid games to back up the technology. Again, stockholders, we have the answer. Mr. Kyanka's dedication has allowed us to offer not one, but two "killer app" games for our system's launch, slated for sometime after President Jeffries finds his checkbook. Let us give you another glimpse of the State Og future:

Drive Home from Work: Imagine, if you will, a gritty, realistic look at something we all experience – the daily commute from work. Well, we at State Og have captured the feel in our OgBox Multimedia Gaming Platform exclusive title, "Drive Home from Work."

Imagine recreating the stunning sensation of dodging the annoying secretary and her inane chit-chat on the way out the door! Feel the anguish of making it all the way out to the parking lot and seeing you got another ticket for parking in a handicapped spot! Experience the thrill as you shout at the parking cop, since no cripples work at your company because your boss refuses to hire them! Only the OgBox Multimedia Gaming Platform is capable of rendering the stunning realism of being rear ended by an uninsured, unemployed Puerto Rican at the stoplight next your slum apartment!

With several exciting minigames, such as "scream at your wife because she always needs something from the grocery and you just want to get the fuck home" and "avoid eye contact with the black cashier at the gas station," "Drive Home from Work" is a sure to be a hit with gamers and disgruntled employees alike. Just ask our intern, Joe! He played the game and shot up his office, killing two and injuring seven! Is that team spirit or what?

Stare at the Sun: Maybe you needed to sneeze. Maybe the skyline was beautiful. Maybe you had severe autism and you thought the sky was giving you directions on how to mutilate your neighbor's cat. Whatever the case, we've all been caught staring at the sun at some point or another, and "Stare at the Sun" is here to emulate the magic and fun of the experience.

Using our advanced Lens Flare and Burning Retina Sensation Rendering Technology System, we at State Og hope to create the most advanced sun-staring simulation available on the market. Optional SpectroGoggles ($49.99) will greatly enhance the experience, pumping countless nanometers of pure UV light into the discerning gamer's eyes. Of course, to avoid even more bullshit litigation, gamers will have to sign a release form prior to playing the game, but that's the price we pay for entertainment the State Og way!

Racist: The Reckoning: This title is still under development but we feel, in honor of Black History Month, we will let you stockholders in on what is sure to be a blockbuster title.

Market research has told us one thing: Online gamers love racist euphemisms. The average game of Battlefield 2 sounds like a Klan rally, and don't even get me started on those wacky Counterstrike kids!

"Racist: The Reckoning" will allow that portion of the market to live out their fantasies in a cohesive, interactive environment filled with branching storylines and breakout graphical performance. Imagine, if you will: You are Will Gentry, a time-traveling racist with an agenda. As Will, your goal is simple: shout racist euphemisms at inopportune times. A busy Popeye's Chicken? I'm sure asking for a "Junglebunny Deluxe" at the counter will cause quite a stir! A Black Panthers rally? I'm sure saying something like "I've never seen a panther drink so much orange soda" will get people riled up! Muslims are no match for your razor sharp wit when you shout "how are you going to drive my taxi when you're on your knees sucking Mohammed's sand nigger cock" at a crowded mosque!

With advances in graphical technology, the State Og Multimedia Gaming Platform is sure to be a worldwide hit. It will be available in a variety of festive colors. Except black, that is. I'm sure you all understand why. 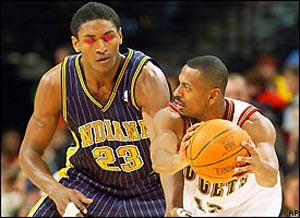 The skills of an athlete and the mental power of an ostrich: only from State Og.Let's face it, folks: There are sports and then there's sports entertainment. Thanks to a long-running joint venture between State Og and the NBA, we are close to reaching a middle ground.

The field of robotics has advanced greatly over the last decade, allowing for, among other things, the creation of androids that are perfectly capable of acting like batshit-insane humans. Enter the Ron Artest-Bot.

Sure, the Artest-Bot has done well in its beta run. Besides being a great simulation of a professional athlete, it is also excellent at emulating the actions of a schizophrenic pro athlete. This is a great step up from our previous venture, the Latrell Sprewell-Bot, which showed only marginal athletic ability in contrast to its lust for insanity and choking human beings. The Sprewell-bot has recently been toned down, limiting its actions to mediocre basketball ability and occasional crazy statements at press conferences.

The Artest-bot, however, has gone through an upgrade after its recent placement with the Sacramento Kings. Let's look at the improvements:

Our craziest robot, however, is the David Stern-Bot. Its position in the NBA assures us a deal for more robots will be taking place in the very near future. Long live robot sports!

Beer Commercials are a dying art. Gone are the days of innovative, entertaining ads filled with frogs and monosyllabic catchphrases. State Og plans to change that. As part of its new ventures, State Og will be hiring out consultants to make sure beer companies give the consumer the best beer commercial experience possible. We have drafted an example script to send to these companies, which we will share with you now:

[Scene: A "hang-out room" in the suburbs. Two friends, Brad and Ted, are drinking beer.]
Ted: Yo, Brad. We're almost out of beer. I think it's your turn to make a run.
Brad: No can do, chief. I told the little lady I'd unclog the pipes, if you get what I'm saying.
[Guys laugh and high-five. ENTER Brad's wife.]
Brad's wife: Hon! You guys drank all the beer! Are you watching sports again?
Brad: Hell yeah, hon. Sports. Brews. Buds. The way it oughtta be.
Brad's wife: You're hammered! Do you even remember how to get to the liquor store to get more?
Brad: I may go to crazy lengths to get more beer, but I'll be damned if I'm going to ask for directions!
[Brad and Ted laugh and high-five. Wife smiles knowingly and rolls her eyes. Fin.] 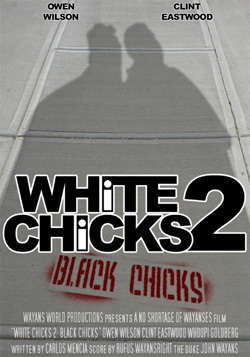 That's right, folks. One of our last ventures into the scientific field ended with a few permanently scarred scientists and the ability to communicate with the dead! Using this technology, and the knowledge that moviegoers love sequels to popular films, we are pleased to announce our first feature film: "White Chicks 2: Black Chicks."

You see, we found out the two cheapest workers in Hollywood are out-of-work racist comedians and dead racist senators. Mencia works for Wendy's gift certificates and the occasional "good job," and Thurmond, well, let's say he's inclined to work a lot harder when you start burning pictures of his loved ones. The dead may need their rest, but dammit, America needs comedy, and whose needs are more important?

"Black Chicks," starring Owen Wilson and Clint Eastwood, is a delightful look at the lighter side of urban culture. When the president is captured by a group of serious but wackily incompetent ecoterrorists, Wilson and Eastwood (playing FBI agents) are called to their hardest assignment yet – dealing with each other while costumed as morbidly obese black women!

Where will their adventures take them? We don't know but we're guessing they'll see at least a couple of K-Mart parking lots and probably a Baptist church or two! And with Carlos and the dearly-departed Strom at the helm, we can let the "edgy" humor fly. Consumers know racism is ok if minorities and ghosts are the ones making the jokes! Hell, maybe ghosts are a minority. I'll have to have R&D check that.

With these ventures we hope to rebuild State Og's flagship reputation as a solid, dependable company whose products are only marginally dangerous if used incorrectly. And we want you to be a part of it.

It is the future, ladies and gentlemen, and we hope you are with us. If not, I will gladly show you the door. You know, the one with the turrets by it.

My Daily Dirt Isn't So Much Daily As Biweekly

Does your idea of social contact involve a raid on Molten Core? Did you get your last haircut because your mom threatened to pull your WWE on Demand subscription? Do you own more wallscrolls than personal hygiene products? Well, never fear, because this week we're going to learn how to be the most interesting guy at the party! Click here to find out more!