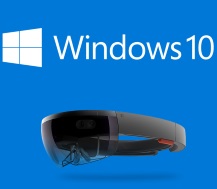 As the July 29th release draws near, each Windows 10 Preview update takes an exponentially larger step toward becoming a functional operating system that people might begrudgingly use if they can't afford a mac or they would like to play video games. In fact, today's patch has more changes and fixes than any previous update!

Now Tablet Mode recognizes and responds to touchscreen inputs! From one finger only. And not the finger you're thinking of.

All references to the name of the operating system, from the boot screen to all information panels and help files, incorrectly referred to the product as "Wandows X". Not sure how that got past us, let alone how it managed to stick around for so long. We have finally fixed every instance of this typo by replacing it with the proper title of "Wandows 10".

Our last pass through the Accessibility menu is now complete. Users can now find several new settings, including foreign language mode (wherein all text remains in english but is read aloud slowly and at maximum system volume) and colorblind mode, which zooms the entire screen by 200%. The default font is no longer Steampunk Hamburgers.

In the past there was a different sound for every action in Windows, be it a click or a file folder opening or an error. We see the future of computing as a matter of streamlining. Now all actions are accompanied by one sound: A midi of dogs barking out the tune of Jingle Bells. The entire song.

After weeks of tweaking, games now run at an average of 500% above their frame rate in the last Windows 10 version. How did we accomplish this? A little thing called Minimize Mode. Simply set your favorite software title in this mode, watch it disappear into the task bar, and go about your life with the sort of complete confidence that only comes with knowing your game is running super fast.

Improved the time that it takes to reach the desktop from a cold boot by an average of three seconds on a solid state drive. To put things in perspective, the speed of light is less than three seconds and you have lived for several years. Think about all that power the next time you turn on your computer and log on to WhatIsTheInternetImTrappedOnThisSite.com, which is your home page.

The trashcan is no longer labeled "My Life".

Corrected an issue in which eyeballs in desktop wallpapers bulged like those of a cartoon wolf leering at an attractive woman through binoculars.

Virtual reality headsets are now fully supported. They should almost never cause the keyboard and mouse to physically move away from your desperate searching hands.

Found the line of code that caused all file types to be associated with (and therefore exclusively opened by) Manga Studio EX 5. We haven't edit this line, but we are watching it. Very closely. Very closely indeed.

User account passwords can now be longer than one character.