Insufferable Piece of Crap Will Be Dearly Missed 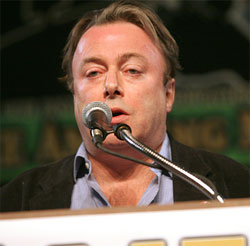 Living wank-drip Christopher Hitchens is no longer living at age 62, having lost his long battle with cancer he put into his body with cigarettes and booze. He has become a corpse. He supported imperialistic wars, he believed women to be inferior, he was an outspoken anti-Muslim, and was generally ill-regarded by whoever was not busy smoking drugs and painting FUCK OFF PAKI on walls.

The intellectual world does not abide many vulgar human beings and Hitchens was proudly among the most vile. During his too-infrequent US TV appearances he would slump into a chair, sweat-ringed and tired, for an eye-rolling debate with people he obviously designated intellectual insects. Perpetually exasperated by everyone, he slurred his words and slouched with such aggressively poor posture it seemed he might ooze out of his chair and onto the floor. He was a man who looked like he smelled of cigarettes.

Hitchens was best known for his opinion articles. I haven't ready any of the obituaries for Hitchens yet, but I am guessing they will either gloss over his many disgusting outbursts, maybe call him a "controversial journalist," or excoriate him for his disgusting opinions and toe the line of celebrating his death. I would suggest both are easy ways of looking back on a brilliantly, hilariously terrible human being. 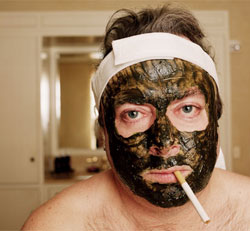 In 2007, Hitchens expanded on Jerry Lewis' infamous "women aren't funny" comment with an article entitled "Why Women Aren't Funny." The gist of Hitchens' argument was that being funny was necessary for men to get laid, but women just had to look nice and men would want to hump them senseless.

This argument is so thoroughly silly it hardly demands counterpointing, a fair many dull cocksmen can attest, and yet TV critic Alessandra Stanley felt compelled to do just that. Her article has the unfortunate effect of making Hitchens seem sort of right when he was totally wrong. He immediately appeared in a gloating video, once against rolling his eyes at the preposterous concept that anyone would question his views. Disgusting and hilarious.

Virulently anti-Islamic, Hitchens framed the post-911 world in neoconservative terms of existential survival against a Muslim threat. He did not temper his disdain for Islam in general and, though an outspoken atheist, often defended Christianity against Islam. This single trait more than any other endeared Hitchens to American conservatives, but Hitchens was not cut from their craven cloth.

In 2009, while visiting Beirut, Hitchens spotted a poster for the Syrian Social Nationalist Party, a political party in Lebanon which supports Syrian intervention in the country and is violently anti-Irsaeli. Hitchens recognized a symbol on the poster as a version of the Nazi Swastika and he set about defacing the poster in a drunken rage. Stop and think about the gross audacity of this act. This is a fat, old, Englishman in Lebanon defacing political posters on the street. And shouting in English while he was doing it. 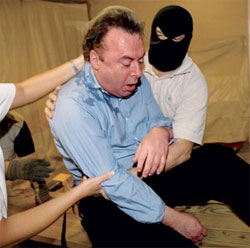 Hitchens was grabbed off the street and beaten by pro-Syrian thugs, or possibly just people angry seeing a fat British man screaming and defacing a political poster. He's lucky he survived the incident to write another anti-Muslim article about it.

Though his opinions were often contemptible, the remarkably inflexible world of opinion journalism was alien to Hitchens. He changed his mind. He supported waterboarding until he volunteered to be waterboarded, after which he penned an article for Vanity Fair entitled, "Believe me, it's torture." The fact that nobody who might have agreed with him before bothered to listen to his changed opinion is an indictment of them, not him.

Christopher Hitchens was a pompous buffoon, fueled by booze and cigarettes, and an advocate of an often-despicable worldview. You can dislike him for his repellant views. You can hate his loathsome behavior. You cannot pretend the world didn't just lose a one-of-a-kind voice in our culture. There's nobody left like Christopher Hitchens.

You'll be missed, you awful bastard.