There On Gilligan's Island 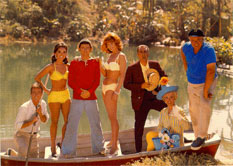 The usual suspects.There can be no doubt in the mind of any sane man that "Gilligan's Island" is one of the most surreally awful shows ever to appear on television. Its dumb shit antics tipped over the rim of humorous and into some sort of looping time vortex of terrible retard jokes and even worse "trapped on a desert island" plot lines. The cast amounted to a bunch of trainables, including a few with tits, and the professor who created believable devices from coconuts in a joke that wore thin before it was even finished being made the first time.

Many long and exceptionally worthless philosophical treatises have been written using Gilligan's Island as the baseline. I do not intend to repeat these mistakes, preferring to address the sheer horrendousness of the show in an objective and fact-filled manner. First, let's briefly take a look at the cast of characters.

Gilligan - Profoundly retarded first mate, Gilligan is so stupid that his lack of basic motor functions actually served as the core of almost a dozen plot lines throughout the three season run of the series. If I were trapped on a desert island with Gilligan I think about the only useful purpose he could serve would be as a source of food. 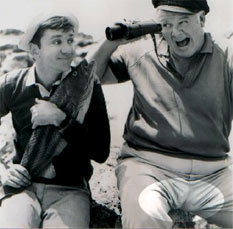 Photographic evidence of the giant pussy Skipper was said to possess.Skipper - Fat and sassy, the Skipper was in charge of the ill-fated S.S. Minnow during its fateful voyage. While just as stupid as everyone else, Skipper manages to conceal this to an extent by being a belligerent hothead prone to violence. If I were trapped on a desert island with Skipper I would probably end up either a murderer or a corpse inside about five minutes.

Ginger - A movie star taking a pleasure cruise on the S.S. Minnow with a bunch of genetic rejects is about as believable as a human being with an IQ above 50 actually being able to sit through an entire episode. Where did she get her makeup and sparkly dresses from? Guess what, I don't fucking care. If I were trapped on a desert island with Ginger she would be gagged and tied naked to a pole for the duration of her short and semen encrusted life.

Mr. and Mrs. Howell - The only positive thing I can say about this show is that actors playing idiotic and immature idle rich people are roughly half as grating as the actual idle rich, as demonstrated by MTV's "Rich Girls". Despite that Mr. and Mrs. Howell are walking poster children for the redistribution of wealth and vivisection of the elderly. If I were trapped on a desert island with the Howells I would hunt them for sport and fashion a cape from their tanned skins.

Mary Ann - Considered by many to be the "piece of ass" on the show, Mary Ann is a borderline brain dead yokel prone to brief flights of attraction towards Gilligan usually inspired by either commie mind control or ancient islander magic. The one thing she has going for her over, say, Ginger, is that she's actually willing to get dirty once in a while and do some work. If I were trapped on a desert island with Marry Ann I would probably spend three weeks hitting on her and then end up caving in her skull with a rock.

The Professor - The good old Professor constantly dreams up new and wacky inventions he has cobbled together out of coconuts for the supposed purpose of either escaping the island or assisting in survival. In truth the inventions never work and are little more than the imaginings of a syphilitic fever dream contracted from sexually assaulting diseased apes. If I were trapped on a desert island with the Professor I would trick him into fucking a fake ape made out of ammonium nitrate and then steal his Swiss Army knife once the friction from his rabid humping triggered a massive explosion.

Every single character on the show, including the ridiculous number of guests, is a nightmare made flesh through the diabolical collusion of the writers and the casting department. Plots on the show invariably consisted of one of three different episode types. 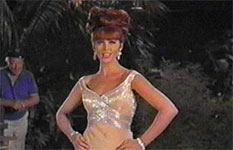 The Skipper plans to redefine "date rape".The New Arrival - The New Arrival is the most frequently used plot type on Gilligan's Island. Given how difficult it seemed to be for the passengers and crew of the Minnow to escape from the island it was amazing how frequently other people suddenly showed up. Lost surfers, crates full of magic devices, missiles, and dozens of other people and things suddenly washed up on the island with alarming regularity. Sometimes these new arrivals plotted to undermine or destroy the castaways from the Minnow. Unfortunately, they always failed.

The "New" Arrival - The bumbling collection of chromosomal disorders stranded on the island suddenly find someone or something that they should have noticed about five seconds after they landed. Sometimes it's another survivor, sometimes it's a giant magical idol, sometimes it's an entire tribe of stereotypically idiotic natives. It doesn't matter and I promise you won't care.

Gilligan is a Fucking Mongoloid - When the writers stopped being incredibly drunk or high they were just lazy, and blazed a trail of stellar mediocrity through the remaining scripts by having a number of whole episodes centered around Gilligan just being a dumbass. Probably the most perfectly absurd "stupid Gilligan" episodes took place in the third season, when the Professor unintentionally turns Gilligan invisible while trying to remove a bowling ball that became fused to Gilligan during a mishap involving stupidity and lightning. I wish I were making that plot up.

In addition to the constant coming and going of visitors on the supposedly isolated desert island, there were also two main hazards that the castaways faced.

Quicksand was one of those dangers, and let me tell you that nothing is more terrifying than quicksand. It's one of those things that your parents, park rangers, and very special episodes of "Silver Spoons" warn you about, but you never actually see it in real life. Quicksand is a pitiless and always hungry mouth waiting to swallow hapless travelers and shipwreck survivors. Did you know that in 1999 alone over 600,000 people were killed by quicksand? It's true! I was amazed to find that in 47 states and over 300 countries quicksand is the number two killer, above cancer and behind heart disease.

The other big threat to stability on Gilligan's Island was the frequent and menacing appearance of various groups of violent natives. Luckily for the writers behind Gilligan's Island there were no "savage islander" political groups to boycott them and raise a stink over their hideously insulting portrayal on the show. To give you an example of how dumb they make the natives out to be, in one episode a voodoo chief is actually outwitted by Gilligan. That's right, the man who can hardly dress or feed himself used his extremely basic white-man's intellect to defeat what is presumably the smartest man in a tribe.

In 1981 a study was conducted by the American Medical Association that demonstrated the dangers of Gilligan's Island. Test subjects were given a battery of tests to determine their intelligence and basic aptitudes and then separated into a control group and an experimental group. The control group was placed in a room and told to watch a one hour documentary on the tuna industry. The experimental group was placed in a similar room and forced to watch two back-to-back episodes of Gilligan's Island.

Following the tuna documentary the control group was given a new battery of tests and produced results similar to their scores before watching the show. Those test subjects who had watched Gilligan's Island, however, were less capable. Many of them failed to respond to verbal instructions and simply stared at the blank TV screen and drooled. A few swallowed their tongues and had to receive medical attention and in one tragic case a woman fell victim to brain death extending to her autonomous nervous system. The handful of experimental subjects who could be corralled into retaking the battery of tests randomly filled in answers or drew pictures of phalluses on their test form.

The findings of the study were released in the Journal of the American Medical Association. The AMA favorably compared "protracted exposure to the fumes of adhesive or propellant" to "even one second of exposure to Gilligan's Island". They described the show as affecting the brain the same way high doses of radiation affect the structure of individual cells. Dr. Arnold Davis, who headed the experiment, warned that "Gilligan's Island is an invisible and keen blade slicing into the skull of anyone unfortunate enough to look in its direction." Further warnings from similar studies were completely ignored by the entertainment industry that not only continued to air syndicated episodes of Gilligan's Island, but also produced a total of four reunion movies.

It is my hope that this article has touched a number of you. If it has prevented even on person from watching Gilligan's Island or allowing their children to watch Gilligan's Island then I feel I have accomplished something here.

I'm a little late. Sorry about that.

As I've said before, us goons here looove to mess with movies. I dare you to find a Comedy Goldmine or a Photoshop Friday where I don't have a movie reference. We might have one or two, but that'll be cutting it close. Movies are all over our stuff. So why be any different this time around? We're fucking up the climactic moments in movies this time, and comedy ensues! Maybe that little Fark catchphrase will get me linked on Fark. I doubt it. Drew Curtis of Drew Curtis's production of Fark.com has forsaken me. And here I think he's a nice guy.

Have a happy New Year!