Someone dies every day, alone and afraid, blood spilling out onto the wall-to-wall Berber carpet they purchased at a deep discount. That same person, whose murder is so quickly forgotten by the local police, had trouble getting a job because he wasn't like everyone else and had to deal with discrimination in almost every area of his life. No, I'm not talking about a black person, a white person, or even an Eskimo; I'm talking about the undead. Vampires and zombies to be precise, and neither is getting a fair shake in today's society.

Let me tell you about Dora Smithson. Dora was the eldest daughter of the Smithson family, a high C student, a girl who was going places and was popular with her friends. She was dating the second string wide receiver on the Bailey High varsity football squad and they had high hopes of getting married after graduation. One warm summer night, on her way home from a party, Dora Smithson was killed by a drunk driver. Actually, Dora Smithson was tanked to the gills and drove her Toyota Camry at high speed into the side of a farmer's barn. It was almost two hundred feet from the road, but Dora was just that drunk, and if it's any consolation she hardly even felt the support beam in the barn that rammed through her chest like a stick through a chest-shaped hotdog. That hotdog's ribcage was shattered, its lungs crushed, its heart torn out and punched through the back of Dora's bucket seat. 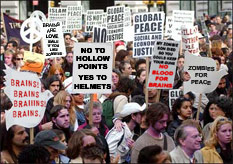 Zombies protesting the proliferation of guns and particularly hollowpoint bullets in the United States.Luckily Dora's parents made the pragmatic decision to inter her remains in the graveyard adjacent to the Peterson Dangerous Chemical Waste Pit of Rusty Barrels. Compound 78X is pretty corrosive and one night less than three weeks after Dora's burial one of the barrels containing the compound ruptured. The compound reacted with the nitrogen in the air and created a vapor that transformed the dead into Hungry Dead Americans, or as you might know them, zombies. Dora clawed her way through the wood of her casket and back to the surface to seek out the hot blood and flesh she needed to survive. She staggered back to her parent's house relying on hazy flashes of memory that surfaced in her decaying brain. Did her parents welcome Dora and her new friends in? Did they run to embrace her when they realized that their loving daughter had been returned to them?

No. Indoctrinated by decades of anti-zombie and anti-vampire sentiments in the United States they screamed and barred the door to their own daughter. They boarded up the windows and cowered in the basement. Dora's love was strong enough to tear through those boards and she and her new friends entered what used to be a loving home. Even though her mother had nearly fainted with terror at the first sight of her daughter, Dora sought her out and even ate large chunks of flesh from her mother's shoulder. Despite such kindnesses the racial hatred in Dora's father was deep and he unthinkingly fired a shotgun blast directly into Dora's unprotected head.

Fact: 83% of zombie fatalities are caused by a gunshot wound to the head. Some zombies manage to survive low caliber or glancing blows to the head as most motor control and reptile brain functions are centralized in the brain stem. Unfortunately, the proliferation of high caliber weapons and the use of hollow point rounds supposedly for self-defense purposes have lead to an increase in gun-related zombie violence.

Dora fell to the ground, most of her head blown away. For a few minutes she tried to continue to love her family but the hatred of her father had robbed her of her life for a second time. Not that her father was directly responsible for her getting drunk and slamming into that barn, but if he had paid more attention to her when she was younger maybe that could have been avoided as well. But avoiding normal death isn't the point; the point is that the violence against the undead in this country needs to stop. Stopping it won't be easy because before it can attitudes around the country have got to change.

Zombies are unfortunately not the only oppressed minority in this sad country we live in. According to the last national census there are some 950,000 vampires living in America and do you know how many vampire senators there are right now? None. Strom Thurmond was a lich, and technically allied with the undead lobby, but he died when racist activists found the clay jar containing his ensorcelled heart and threw it into a magical fire. There are two zombies in the House of Representatives but they are token gestures made by the Democratic Party to win support in zombie-heavy districts.

Most vampires are over a century old and that means they have a lot of experience on the job. With that in mind it might surprise you to know that the average vampire earns almost three dollars an hour less than his not dead counterpart. Black female vampires might as well forget about getting paid all together, their bosses generally just give them blocks of salt and laugh while lighting cigars with hundred dollar bills. Ironically Benjamin Franklin, the man pictured on the hundred dollar bill and several commemorative plates, became a vampire late in his career and was immediately shunned by his peers. Not even a genius of politics and science like Franklin could get a break once he became a vampire.

For vampires there are things worse than low wages or under-representation in politics and that's the growing popularity of fundamentalist Christianity and its misguided belief that vampirism can be treated. Some think being a vampire is a disease that can be cured just like malaria by praying to God. Others believe that vampires can be convinced to lead a normal life by psychological or spiritual counseling. They think that vampirism is a choice, but it isn't. Being a vampire is not something that can be denied or cured, it's something that every vampire must live with. And what sane vampire would make the choice to be hated, to never be able to eat a solid meal, to miss every sunrise and sunset until the day they die, and to have severe problems combing their hair? None, of course, vampirism is not a decision, it's an immutable fact dictated by an incurable physical condition.

Fact: Vampires cannot turn into a bat, levitate, or fly. They can, however, ride on airplanes and according to recently declassified DoD files there is a jet that can turn into a bat. Maybe you need to think twice about who is the racist now. 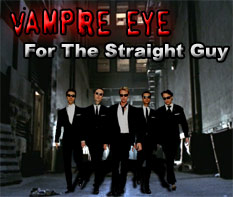 Some steps have been made forward in the movies and on television for vampires, but still they usually find themselves portrayed as extreme stereotypes.Sure, some would say that there are plenty of up sides to being a vampire like never getting old, being able to turn into a mist, excellent fashion sense, and hypnotic gaze. Yeah, those are all fabulous, but think about never being able to eat Italian food again or constantly living in fear of taking a stake through the heart from the racist down the street. If you think racial violence is only a problem for zombies and Eskimos then you need to think again because only half of a percentage point of vampire fatalities so far this year can be attributed to natural causes.

For further proof look no further than ten days ago when Baron Klaus Pretsche was brutally murdered in Montana by a pair of drunken punks. His murderers claim that Pretsche tried to convince them to get into his hansom carriage with them and even made a pass at one with his hypnotic gaze. I say, so what? If I murdered every vampire that tried to use his hypnotic gaze on me in a bar I would have a pile of ashes a mile high in my living room. Why should a vampire not be able to pursue his lifestyle in peace? Apparently these two scumbags thought that a failed pickup line by a 350 year old Hungarian vampire was enough to warrant beating him unconscious with pipes, shooting him 75 times, and then tying him to a wooden fence in a field outside the town. Klaus should have woken up from his injuries some time the next morning, but he never did because he disintegrated into dust the minute the morning sun hit him.

Our jails are full of zombies, our crematoriums are full of vampire ashes, and conservatives are complaining about the inherent racism of giving these oppressed minorities a fighting chance. They claim that quotas that force employers to give only the barest minimum of jobs to zombies or vampires somehow violates their civil rates. They think that centuries of oppression have already been compensated for by just giving zombies and vampires the right to vote and move freely in society. Yeah, they are really living the American dream when a zombie can hardly walk into a bar without half the people there unloading pistols into their skulls. Vampires sure have it easy making chump change in their jobs at McDonalds. Hey Republicans, would you like a side of fries with that racism burger?

It's high time that we act to ensure our brothers of another body temperature have the same opportunities in society that the color of our skin and the beating of our hearts provide us with. I propose the formation of a coalition to bring about change in our government and throughout our society. It will be a group of people of all colors and morbidities and we will unite under the banner of the NAALDP - The National Association for the Advancement of Living Dead People. Together we can change the world!

Reach For Your Dream, Cretin!

Hello cats and dogs, Livestock here (on the internet, not on the phone or at your door). In spite of all the famous people named John dying, we still have a new Photoshop Phriday picture feature online for your enjoyment! This week the goons returned to an old topic they've beaten to death once or twice before on the forums. Since we never quite featured it in a Phriday or a Comedy Goldmine (unless I simply forgot), it now gets some attention! What topic you ask? Motivational posters, those wretched things lining offices, classrooms, and other places where empty wall space gets transformed into a life-changing font of wisdom. You, the viewer, can read this Photoshop Phriday simply by clicking on this block of gibberish: ASHFKLAHGAKHGKLAHGASHG!!@#@!#