This Entire Article is a Plug for My Book

I had promised myself that I would not write anything more about my upcoming book "My Tank is Fight!" until it was much closer to its release. Members of my mailing list had been clamoring for an update for a while and I thought I would write one. Turns out when we relocated our servers our tech guy managed to lose all of the mailing list info including over 6,000 subscribed email addresses. Whoops! He has taken care of getting the mailing list back up, sans subscriptions. Since having that mailing list is pretty important for getting the word out about the book, I come here hat in hand, and beg that those of you who had subscribed head to the sub-site and re-subscribe. If you're just hearing about the book for the first time, well, you're welcome to subscribe as well.

"My Tank is Fight!" is a humorous look at 20 odd inventions from the Second World War. It includes a detailed development history, capabilities and a smidge of pulp action in the telling of a fictitious deployment of the invention. It has been a wild ride working on this book and it's not quite over yet. I finished my first draft in January and handed my edited version in at the beginning of May. The only thing left for me to do at this point is approve the galleys when they come from the publisher. That will be my last chance to make alterations.

The book has been a collaborative effort. Josh Hass and Mike Doscher, my color and black & white artists, have been with me nearly the whole way. Jim Boswell coordinated the fantastic cover design with Josh and Suji Allen created a template for the interior layout for the publisher to reproduce throughout.

For those of you who missed out on the booklist, here is a sample of Josh's work in the form of an animated GIF.

Look closely at that GIF and you can see the incredible attention to detail and the many revisions he went through with each color plate. Those aren't even all of the revisions. Speaking of attention to detail, Mike Doscher, responsible for the many complicated illustrations in black and white seen throughout the book, was also great to work with.

Pretty cool, in my opinion. Last on the art front, here's a peek at Josh and Jim's collaborative work on the cover: 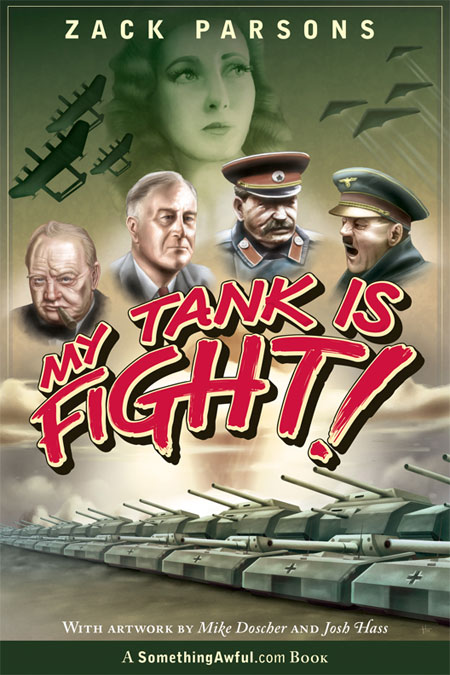 I've seen test prints of the cover and they're awesome. The publisher saw the quality of the art and decided to go with raised text for the title. It looks extremely cool.

I thought I might finish up by including a sample of the fiction element of the book. Keep in mind that this excerpt is a rough draft version of the text, so it's probably missing about 500 commas. Try to guess the name of the invention being covered in the chapter from which this excerpt was taken.

"Poking around Project Cyclone." The American in a 1st Infantry Division lieutenant's dress uniform tossed a folder onto the dining room table.

"Shouldn't you be with your division?" R.E. Lincoln grinned and reached for his pipe, then realized they had confiscated it along with his notebooks.

"Spelunking at the London Gun site." The man tossed another folder onto the table. "That got you sent up to Patton. I believe he threatened to shoot you before sending you back towards the Channel coast."

"That incident was blown totally out of proportion."

"We thought we were rid of you when we shipped you back to England," another folder joined the growing pile, "but you went on that little sight-seeing flight with the RAF and your plane had to put down…where was it?"

"Tantoville." The faux-lieutenant opened the final folder. "That was three goddamn days ago. How did you get mixed up with the Canadians that fast?"

"A reporter never reveals his methods." R.E. sipped at the tepid cup of tea his host had so generously provided.

"That's a magician." The man flipped the last folder closed and tossed it onto the pile. "Hell, maybe the OSS should hire you."

"Is the pay good?" The question prompted the otherwise unflappable lieutenant to furrow his brow.

"The question now," the man leaned in, "is what does the United States government do with a bear that keeps getting caught with his paw in the beehive?"

"You could always frog march me in front of a wall and be done with me."

"Cute." The man pulled his glasses from his face and pinched the bridge of his nose. "Unfortunately for my sanity, the United States government does not employ Gestapo methods even on pests as persistent as you."

"What then?" The man echoed the question. "Ground transport has been arranged for you right back to Tantoville. From there it's Scotland and a nice long voyage on a passenger liner."

"Your war is over, Mr. Lincoln." The man finally smiled. "A very uncomfortable truck will be arriving in about six hours to take you out of this theater. Who knows, maybe you'll find your way to the Pacific and make trouble for some poor s-"

There was a sudden rattle of gunfire outside the house that the not-lieutenant had turned into his interrogation room.

"Stay here." The man drew his sidearm and disappeared out the door.

R.E. Lincoln had absolutely no intention of staying "there." He snatched up the satchel containing his confiscated possessions and followed his captor out the back door of the house. He emerged into chaos. Bullets were shivering the snow-dusted pines near the outskirts of the village and R.E. could hear the creaking of tank treads. The erratic crackle of Canadian carbines was overwhelmed by a canvas-ripping burst from a German machinegun.

R.E. ducked around the side of the house. The Canadian military police attached to the Lincoln and Welland Regiment were ducking behind what cover they could find. They looked like armed beekeepers in their bulky white winter gear with snow-cloths draped over their doughboy helmets. There was a snap of timbers and the enemy tank burst into the main thoroughfare, such as it was.

R.E.'s fear of being confronted by a roaring Panzer was replaced by total bewilderment as a German submarine smashed through the last of the pines and onto the dirt road. It would have been laughable, but R.E. watched as a Canadian with a PIAT to his shoulder was cut down by machinegun fire. The blood bloomed on the poor man's white uniform as he staggered back and then toppled over. A grenade popped and shrapnel sparked off the curved flank of the bizarre machine.

"Goddammit, Lincoln!" The not-lieutenant grabbed Lincoln from behind and yanked him around the corner and back into the house.

"What the Christ Almighty was that?"

"The ah, Panzer Eight." The man cranked a field telephone. "HQ, HQ. This is station nine, enemy tanks advancing on our position from the northeast. Requesting armor support."

Two Canadians stomped through the back door carrying a Browning machinegun and boxes of ammunition. They nodded deferentially to the not-lieutenant as they trundled past him towards the other side of the house. The submarine-tank's machinegun fired once again, shattering glass and tearing ragged holes through the walls of the dining room. R.E. felt a tug on his hip and fell to the floor.

"I'm shot!" R.E. yelled and rolled onto his other side trying to get a look at the bullet hole.

There was a neat hole blasted through the rucksack hanging over his shoulder. He opened the sack and peered inside. His pipe was shattered.

"My pipe is shot!" He yelled, even more upset than before.

"Keep your head down, you idiot." The not-lieutenant was flattened on the floor.

"It took me fifteen years to season that pipe."

Another burst of gunfire tore through the walls and was answered by the deafening roar of the Browning firing from within the house.

Finishing things up, please subscribe to the mailing list for the updates. For those of you who keep asking: the book will be released some time in October, but preorders and possibly a special edition of the book will be available hopefully in September.