A Guide to Tiny Home Ownership 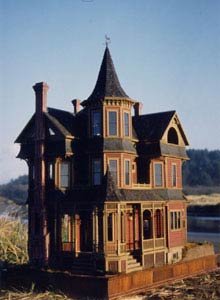 Owning a tiny house can be one of the greatest joys that life has to offer. Unfortunately, there are few pains as severe as seeing your tiny house destroyed. The great tragedy here is that most tiny home disasters are, with the right knowledge and foresight, entirely preventable.

Although you may wish to build your tiny house such that you can carry it around with you, this is not a good idea. Putting it in your pocket or grasping it in the palm of your hand are both extremely risky activities. One little accident and your entire tiny house could end up a pile of tiny rubble. Worse, you might simply set your tiny house down and lose it, unable to find it because it is tiny and hard to see.

Most tiny home enthusiasts choose to build in pleasant, natural locations. A Big World house is going to be built on a piece of property where it will stay indefinitely. A tiny house should be no different.

Building outside is not without its dangers. The major downside to tiny houses is that they're simply much more fragile than any other form of housing. Because of this, great care needs to be taken at all stages of tiny home ownership, starting with construction.

The number one danger facing tiny homeowners is bugs. Will bugs take over my tiny house and turn it into some terrible bug den? They will--if you let them. Bugs simply do not respect personal property rights. Army ants have no qualms quartering in your house, regardless of whether you invite them in or not. Seeing a worm pop up out of the ground and tower over your tiny home can be extremely traumatizing. When you build a tiny house you need to consider your security from day one.

When I built my tiny house I wanted to protect my tiny possessions from the thoughtless violence of the insect hordes. That's why I spent weeks fortifying the area I planned to build my tiny house. I prepared separate defenses for each kind of bug. For the crawling and marching kinds, I dug a tiny moat around the perimeter of my property. For the hopping kind, I erected a tiny fence along the property border. If any hopper dared leap at my property, it would splat against the wall and fall into the moat. For the flying ones I built a small set of trebuchets and put up piles of salt crystals I could launch at them. Unfortunately, I have yet to devise a worthwhile strategy against the worming ones. I just hope they leave me and my tiny home in peace.

While such fortifications could easily appear unsightly or even menacing, I took special care in making them as aesthetically pleasing as possible. And I did all this before I even began construction on my tiny Victorian-style house. Had I rushed into construction right away, I would soon be scrambling to protect my investment from any number of insect incursions.

Another thing tiny homebuilders often forget to do is think long term. It's not enough to simply build a tiny house; you have to build your tiny house to last. I took my time and carefully constructed everything according to clearly defined blueprint using only the finest materials. For the harder tasks, such as the tiny plumbing and electrical systems, I hired a contractor. If you want a job done right, sometimes you have to swallow your pride and ask for help. Besides, the last thing you want is to lose your tiny house to a tiny house fire because of bad wiring. Get it right!

Make sure your tiny house is solid before you start moving in your tiny valuables. Even the gentlest rainstorm can produce raindrops half the size of your tiny house. And if the downpour doesn't get you, the flooding and inevitable mud just might. In winter, snow accumulations can seemingly bury your tiny house under a mountain. When it comes to tiny houses, Mother Nature has no mercy. 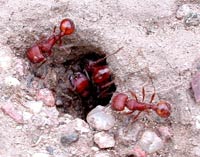 The tiny homeowner's worst nightmare.I suppose after bugs the number two danger that comes with owning a tiny house is trampling. The last thing you want is for somebody or something to step on it. One little bit of carelessness can destroy the sum of your property and leave you tiny homeless. There are two solutions to this, and both are equally important.

The first thing you're going to want to do--and this starts before you lay even your first brick--is pick the right location in Big World. A house built on a commonly trafficked path is only going to invite ruin. A house tucked away behind some rocks or tall bushes is going to be safer. As long as it's not a place animals are going to frequent, you should be good. Be warned, though: curious animals may try to eat your tiny house or tear it apart in hopes of reaching the tiny food hidden in your tiny cupboards. The dangers of Big World are myriad and they must all be taken into consideration before construction begins.

The second thing you're going to want to do is get yourself a really rock-solid tiny homeowner's insurance policy. If some calamity does befall your tiny home, at least you'll be protected financially and in a good position to rebuild. Factors such as proximity to footpaths, roads, and anthills can all influence the cost of your policy, so be sure to research your surroundings and shop around.

If you keep all of these things in mind, I have no doubt you'll make a fine tiny homeowner. Just remember: it's a lot of work. Tiny houses need a Big World amount of upkeep. Don't fall into the trap of thinking your work is done the second you move in. That's when it's just beginning.