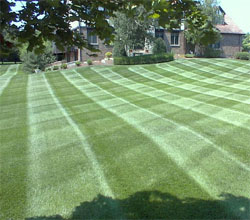 The Benson lawn in happier times.As Richard Benson stoops to pick up the Sunday newspaper from his front porch, he's greeted by a sight that's becoming all-too familiar: a yard full of unraked leaves. He trembles a bit, backs away slowly, then resignedly closes the large, Brazilian Rosewood door with a single shaky palm. His coffee mug drops to the floor, shatters.

Coincidentally, that broken mess of porcelain on Richard's Italian marble floor has very much in common with his own life.

"A few years ago, we'd have a team of gardeners working for hours before we even woke up. The crunch has hit us so bad that we can only afford to have them work half-days on the weekend." Richard looks down at his new mug of coffee through bleary eyes before hurling it across the room in a brief burst of rage. "Now they won't be here until two o'clock!"

Like millions of Americans, Richard Benson is unemployed. In his former career as a senior financial analyst at one of the world's largest banking institutions, he made nearly seven figures; but things took a sharp turn for the worse last November. "My employer wouldn't agree to give me a cost-of-living raise and increase my year-end bonus," says Richard, pouring himself a third cup of coffee, "So I decided to leave for somewhere that would compensate me properly. A few buddies of mine said I was crazy for leaving such a high-paying job in the middle of this... this..." 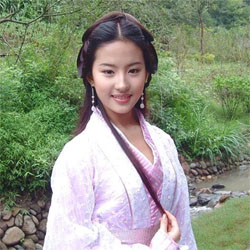 According to research done by The Heritage Foundation, only one in two-hundred American families can afford to hire a Chinese Princess.Richard barely makes it to the end of this sentence before tossing yet another mug to the floor. His fist pounds the brushed stainless steel countertop. "Could someone get Consuela down here to clean this up!? I am not cutting my foot open again!"

The screaming and pounding wakes up Richard's eight year-old daughter, Madison. While she may only be a child, her family's economic hardships have definitely put a strain on her disposition. For her most recent birthday, the Bensons couldn't afford to hire all nine princesses for her officially-sanctioned Disney Princess birthday party; Madison has yet to shake the trauma from this event, even after months of therapy and expensive prescription drugs.

"Kids know. When daddy can't get a Chinese princess for your special day, daddy's a failure," says Richard, cradling his head in his hands. "Maddy and I haven't spoken since then. The only thing that makes me feel better is breaking these coffee mugs."