We've just finished another great season guys and I know it's so easy to rest on our laurels and also never answer any of the five million mysteries we brought up, but we can't stop now. I've taken the liberty of sketching out some preliminary ideas for our next season. Tell me what you think. -D.L.

We will have an episode where we reveal that the entire island is run by aliens and aliens are causing everything and every mystery can be solved by just saying aliens. After the inevitable backlash from the fans, we will point out that the episode aired on April 1st and the entire thing was a prank.

In our further drive to make the coolest character from Season 1 suck, Locke will come away from the electromagnetic incident with Tourettes syndrome and a high, almost girlish voice. He will attempt to resume his role as wise hunter in the jungle, but give up after squealing at Charlie that he should faggot try to cuntlicker make things right with dick in the ass Claire. 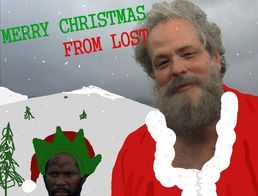 Stuff on the island will continue to randomly symbolize God.

Our format of weekly flashbacks from different characters is becoming a problem as the characters' storylines wear thin. Which is why I'm taking the bold move of having another plane crash. This will bring in enough new cast members that we can phase out the characters fans care about altogether!

These new characters will include, among others, Sam Nietzsche, Jenny Kierkegaard, and Shakespeare McNotnamedafteraphilosopher. Their flashbacks will conform to the level of emotion and surprise already established by the first two seasons. For example:

A man who had to infiltrate a gang of clowns in exchange for a crooked policeman leaving his family alone. Soon, however, he went so deep into his role as clown that he forgot he ever had a family and sank into a deep ocean of seltzer water and degradation. At the end of the episode, he will realize that he never had a family and had actually been a clown his whole life. He will weep in a small clearing in the jungle, holding his favorite red clown nose in his hand.

A woman who worked for a successful and well-respected banker for years, until she came back into his office late one night and found out that he was actually a horse. Also she was a horse too.

A man who spent years thinking he was God. It turns out that he was not God. He was just a nut.

A man who killed ten people execution style while robbing an orphanage. Several years later, he discovers that this actually is morally wrong.

Oh, and I've been thinking we should change our trademark rumbling flashback noise to a sped up version of the theme song from "Enterprise." I'll have to check with our legal department about this.

Ok, I just had my best idea yet. What if we pretended to kill a major character but then have it turn out we didn't really kill them? You know, this is such a good idea that we should use it twice in one season. Oh hell, let's just make it something that happens every episode, it'll keep people on their toes.

As for actually killing characters, we'll continue doing what we always do: poll the fan boards to see which characters are least popular and then kill those off. This keeps up a good relation with our fans and ensures that, while the dramatic tension of the deaths are undercut by the audience cheering and high-fiving each other, at least we don't get any hatemail that could hurt our feelings and distract from our work.

This reminds me. I think I have rethought our decision to hire Joss Whedon as a special story consultant since the only plotline he has suggested is that Sun and Jin should get a disease that causes them to hallucinate and kill each other, only realizing their tragic mistake after the killings blows are landing, and then stagger over and collapse in grief and bloodloss on top of Claire's baby, killing it. At this point, Claire would kill herself and Charlie, finding her body, would try to kill himself with one of the guns, but would miss and accidentally shoot Hurley.

It wasn't just the sheer amount of death he was talking about, but the fact that he was giggling and visibly erect as he pitched it that disturbed me. 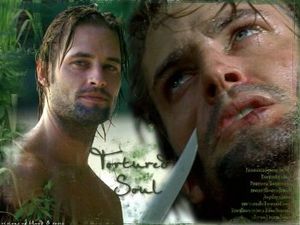 I've been noticing a decline in the biting wit usually evident in Sawyer's constant nicknames for the other survivors. In order to rectify this, I put together a sample list of names that are up to his usual hilarious quality:

Remember that one episode of Family Guy or maybe it was Simpsons I don't remember but anyway it's the one where the dumb animated father turned the house into a puppet and like its roof was going up and down like a mouth while he talked.

Ok imagine that, but with the WHOLE ISLAND. Fuck yes I am brilliant.

In a metaphysical twist that will cement our place in the pantheon of great shows, the Season 3 finale will have our characters discover that they are being secretly filmed as a television show on the north shore of Oahu. Also that everything they have ever experienced throughout their lives were just cleverly disguised locations on Oahu.

Locke will be the first to make this discovery, bursting into a hotel lobby to find Boone tending bar in order to make ends meet after leaving the show. "Well," Locke will say, "looks like we’ve jumped the Dharma-branded shark." Then he will wink at the camera and the Lost logo will come up.