BM: Not a problem; the blood sprinkling out of my right ear is actually refreshing on this hot day. I should press further, though. What was the inspiration for all of these remixes on your new album? 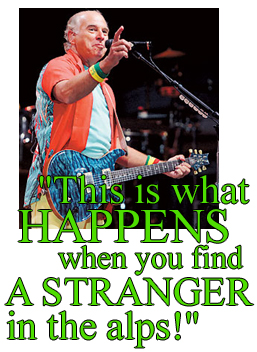 BM: It would be an insult to your fans and humanity not to mention the other five songs on Bahama Bedsores: "Bahama Bedsores," "(Drown Your Baby And) Live the Island Life," "I Made My Boss Walk the Plank," "The Tequila You Never Drank (A Tribute to the Holocaust), and "Bahama Bedsores (Reprise)." Any stories behind these?

JB: Not really. I wrote most of these either on the can or while looking at the drinks menu at my restaurant. Eight dollars for a "Crab Walk Clamato Cocktail?!" And here's the kicker - I let you keep the swizzle stick!

BM: Are there an-

JB: Hey, tough guy: why don't you ask me about my book?

[Jimmy hands me a copy of his novel, A Salty Piece of Land.]

BM: Using Comic Sans for the title of your book? Pretty daring.

JB: Naw, it ain't like that. Listen, I've got five fonts on my PC; I just chose the one that was the most laid-back - like me! Plus I'm told that Wal-Mart customers find Comic Sans very striking. Must be why I'm cleaning up there!

BM: Are there any other projects you're working on at the moment? 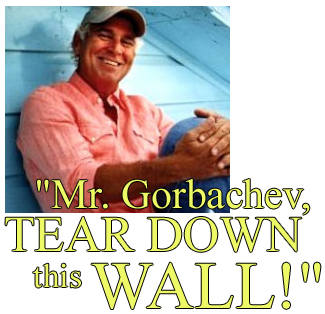 JB: I'll tell you what, Bob: if there's one thing I'm interested in selling more than albums and opening day passes to Jimmyland (opening April 2009), it's a lifestyle. I mean, look at me! I'm 60 years old and I live like a college student! If most of my money didn't go towards cheating death, I wouldn't eat so many Hot Pockets and I certainly wouldn't exclusively drink cream soda. Any other 60 year-old man couldn't so much as look at a piece of broccoli pizza without his heart exploding in his chest like a pudding cup you accidentally microwave when you're really baked. And this is exactly who I'm trying to sell my lifestyle to. Everyone in my generation thought they were "liberated," but they still married their high school sweethearts and had 2.5 shitty kids. And if you live this life, by the time you're 40 you discover that your "sweetheart" has transformed into a paunchy cigarette hag who's bitter that you and your awful children ruined her dream of being more than a chef and a maid for a bunch of ingrates.

I should win a fucking nobel prize for making people to forget about their soul-crushing, go-nowhere jobs by getting them to drink and later dance like sharks. Why shouldn't I encourage the middle-aged population of the world to get trashed until their significant others become fuckable meatholes again? Why shouldn't I provide the music for your gross aunt and uncle to make out to during wedding receptions? I am the giver of life!

BM: Very good. Is there anything else you want to plug?


BM: Sounds "clamtastic!" Any parting words for our readers?