There's quite a hullabaloo surrounding Neverwinter Nights 2. The prospect of a sequel to the popular Dungeon & Dragons game with slick gameplay and graphic improvements alongside a superior single player campaign has a lot of people very excited. But what if you missed out on the first game? What if the complexities of the D&D ruleset are as foreign to you as the complexities of an electric razor are to a D&D player? Fret not! We'll get you up to speed, filling you in on everything you need in order to enjoy Neverwinter Nights 2.

How Dice Come Into Play

The first thing you should know is that in Dungeons & Dragons, absolutely everything is decided by rolling dice. A twenty sided die is the standard, though there are exotic variations with anywhere up to one hundred sides. There is even a one-sided die that is used in rare circumstances, such as when a Dungeon Master rolls to determine whether or not he can get up to get a snack.

In a regular tabletop game, with each step your character takes must pass a roll of the dice in order to determine whether you have successfully taken a step or have slipped, tripped, or died of a brain aneurysm. You can imagine how long it would take just to walk into an olde inn and take a seat, or to tapdance for ale! This is why most D&D players are dedicated groups who meet every week for years and rarely make it past level 6.

How does this curious mechanic translate to Neverwinter Nights 2? Thanks to the magic of microprocessors, every time your character takes a step the computer automatically rolls the dice for you. It's all handled under the hood, freeing you up to manually roll for your character's more important actions, such as breathing and chewing. 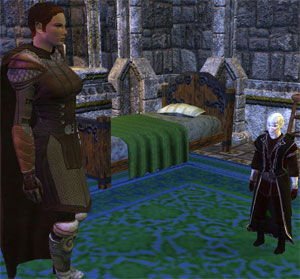 All games based on Dungeons & Dragons use an armor system called THAC0. This may seem complicated at first, but it's really quite simple. See, THAC0 stands for "THAC zero". So there you have it.

Forget the simplistic Good, Neutral and Evil dialogue branches found in games like Knights of the Old Republic. When talking to an NPC in Neverwinter Nights 2, it's very rare that your character to be presented with anything less than five possible responses. The way other characters respond to you can vary as well, depending on your chosen background.

For example, a standard fighter with no chosen background will see this:

"Ah! You've recovered my slice of bread from the bugbear cave! My sandwich can now be completed. I thank you for your assistance in this matter."

While the same character with "Ladies' Man" as their background will see this:

"Ah! You've recovered my slice of bread from the bugbear cave! My sandwich can now be completed. I thank you, you ladies' man, for your assistance in this matter."

The same character with "Troublemaker" as their background will see this:

"Ah! You've recovered my slice of bread from the bugbear cave! My sandwich can now be completed. I thank you, you Troublemaker, for your assistance in this matter."

And the same character with "Farmer" as their background will see this:

Microsoft Flight Simulator X
Now you can fly with a video game controller in one hand, a bottle of grain alcohol in the other, and a casual indifference toward the well-being of your aircraft in your heart - just like the pros! 8/10

Sam & Max Episode 1: Culture Shock
Two mysteries in one: Why did we have to wait twelve years for another Sam & Max game and who actually subscribes to Gametap? 8/10

The Sims 2: Pets
If they're just now introducing pets, what the heck were all those little dogs my female sims found and locked in a closet after having sex? 6/10

Sid Meier's Railroads!
If you don't like this game then you must be loco, ah ha ha ha ha I actually got paid to write this! 8/10

Neverend
I don't know what happened to the developers of this game, but someone really pissed them off and now they're taking it out on all of us. 1/10

Splinter Cell: Double Agent
Once again Sam Fisher sneaks his way into our hearts and snaps our hearts' necks. 9/10

Tiger Woods PGA Tour 07
There are twelve full courses this year and Tiger's model looks better than ever, but to make room for these improvements they had to remove golf balls. 7/10

Bully
Probably the best murder simulator brainwashing tool of the year, and we're all very excited about the bloodshed to come. 9/10

Destroy All Humans! 2
Since we apparently couldn't destroy all of them in the first game, why should we buy this? 7/10

Justice League Heroes
If you absolutely must play a new top-down superhero action/rpg and know that you're going to die before Marvel: Ultimate Alliance comes out next week then I guess you could get this, but you'll still probably regret it. 5/10

The Legend Of Spyro: A New Beginning
I can't make a joke because Gary Oldman is a voice actor in this game and suddenly I'm very sad. 3/10

God Hand
A ridiculously cool beat-em-up, but also heresy because as we all know the real hand of God is in Rise Of The Triad. 7/10

Avatar: The Last Airbender
Sorry to break it to you, but bending air is a feat that's almost as impressive as bending bendy straws. 4/10

Contact
A tiny professor talks directly to you, the player, from inside his 8-bit spaceship on one screen as you control a boy named Terry in a slightly more realistic world on the second screen, while on the third screen the video from Pink Floyd's stageshow loops endlessly, even when you turn the DS off. 7/10