Web 2.0 - Synergistic Folksonomy And You

In the beginning Al Michaels created the internet, and it was good. A new frontier of tremendous potential, the internet made anything possible as long as it involved animated gifs of rotating "Under Construction" signs and tastefully embedded midis of timeless classics by Poison and the Spice Girls. It was a magical time. Even people with no vested interest in whose balls Mr. T had eaten knew something special was happening, and they wanted to get in on the ground floor. If you knew how to register a domain and acquire hosting, you were immediately qualified to receive millions of dollars in startup capital from investors. The following scene was extremely common back then:

Investor: Thanks for stopping by my office. As you know, I represent a group of individuals who are very interested in financing your website. How does twenty million dollars sound?

Young Man: Wow, sounds great! But before we go any farther I must tell you that I haven't exactly figured out a way to make this site profita-

Investor: Properly run on such a small budget? Oh God, what have I done? Forty million.

Young Man: Look, it's not that. There's simply no business mod-

Investor: Why did I say forty? (grimacing, he takes a very expensive-looking pen from its ivory stand on his desk and jabs it completely through the back of his left hand, pinning it in place on his day planner) Whyyyyy? (he looks up from his hand, his eyes mad with eagerness) Eighty million!

Investor: (sobbing as he drops his head to the desk) I just wish I had more to give. I'm an utter failure. If only suicide wasn't illegal!

(The following week, www.WePayYou100DollarsEveryTimeYouLoadThisPage.com launches with a staff of three hundred hipsters diligently riding scooters around a posh San Francisco office. Thanks to buzz from other websites and several news spots about the company's incredibly progressive workplace filled with nothing but comfy couches and assorted arcade games, shares in the company start off at $40 and skyrocket with no end in sight.)

There were so many meetings just like this, in fact, that four startups attempted to buy WePayYou100DollarsEveryTimeYouLoadThisPage.com, leading to the invention of the .net, .org and universally reviled .co.uk suffixes.

Surprisingly, this money party did not go on forever. Stockholders across the globe soon found that the companies they invested in were incapable of actually making money through outside sources, and the dot com bubble burst. Countless businesses which shouldn't have existed in the first place went under. Dozens of office buildings in San Francisco were filled with cement to seal the evil contained within forever. Landfills overflowed with discarded scooters, some of which were still attached to their hipster owners due to mishaps with crazy glue. Everyone got a good laugh out of those guys during an otherwise bleak time, but no one thought to save or at least feed them, and eventually they starved to death.

This leads us to 2004, when the phrase Web 2.0 first pops up in all of its retarded splendor. At first glance the label seems to suggest that the internet as we knew it has been replaced by a shiny, glorious new model with adjustable seats and free wainscoting. In fact, it does not denote an entirely new network, upgraded servers, or any sort of change in protocols. So what is it?

It is a buzzword coined by a group of people who would like investors to start spending their money on internet businesses en masse again. It's a way of buying into the notion that the dot com bubble burst occurred because the internet itself was broken the first time around, and that it's perfectly safe to spend money now because this is Web 2.0, which is obviously improved and much more stable because it has a "2" in it whereas the original internet didn't even have a number in its name, much less a decimal.

Just to make things even more confusing, the guys who coined the term decided it would also represent a standard set of features required to be totally rockin' on the internet, which would present all sorts of great opportunities to cram one big buzzword with tons of smaller buzzwords. If you want your website to be Web 2.0 compliant (and who doesn't?), you'll need to keep the following guidelines from Tim O'Reilly of O'Reilly books' manifesto in mind: 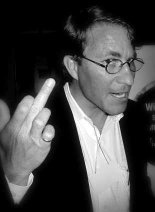 The web as platform

Your site as good if web as platform. This is not example of poor grammar or awkward phrase as.

Control over unique, hard-to-recreate data sources that get richer as more people use them

If your visitors can't share pictures of their cats with a dynamic community of people who don't give a shit or read Amazon.com product reviews written by angry first graders, your site is doing something very wrong. The future lies in a billion jerks sitting at their computers writing crap that a billion other jerks will ignore.

I'm not sure how you're supposed to harness this collective intelligence. I guess you could somehow harness the collective intelligence of Ain't It Cool News' readers to power the device that upends buckets of fried chicken into Harry Knowles' ego hole? It would only run at half-speed and the readers would need to really strain, but it could theoretically work.

By keeping your content in a state where it's never quite finished, you're doing your part to advance the internet. Apparently, Web 2.0 was based on Star Wars Galaxies. Who knew?

Data is the next Intel Inside

I wouldn't fall asleep anywhere near any of the other writers at Something Awful for fear that they'd brain me with a tire iron. If I can't trust the distant acquaintances I rarely talk to (because I dislike them, which I point out every time I do talk to them) with a tire iron, how am I supposed to trust you people with my podcasting data-driven social networking Ajax collective intelligence rich user experience? I can't even imagine what it would feel like to be brained with that, but I bet it would hurt.

I had hoped that Web 2.0 would go away, as the very idea of a few people deciding what buzzwords and features on the internet are most important and then defining an ever-changing network of global information with their own narrow and self-serving label is just plain horrible. Since it doesn't seem to be dying, though, I'm going to go ahead and give the next stage of the internet my own buzzword label: Web 2.1

Web 2.1 is the new standard for web sites and applications in the blogosphere collective information age. It is scaleable and easy to use, as well as being user friendly and designed with the end user in mind. In order to be Web 2.1 compliant, you must follow these guidelines:

If it comes to a rest on the floor for less than five seconds, you can eat it

Don't expose it to bright lights, get it wet, or feed it after midnight

Data is the next Intel Inside

If the kick returner signals for a fair catch but drops the ball, the other team can attempt to recover it

Keep an eye out for an exciting line of books on various aspects of this new era of the internet, coming soon from my publishing house!