A Week In The Life Of The Sims Medieval

One of my favorite articles from Something Awful's early years was Lowtax's A Week In The Life Of The Sims, a measured and fact-filled account of his time with the game. Zack's excellent follow-ups for The Sims 2 and The Sims 3 instilled a fear of character customization in even the bravest of readers. Since The Sims Medieval doesn't exactly fit in with other games in the series and its very existence is something of a surprise, it's only natural that this installment is being written by me.

The Sims Medieval is less of a sandbox game, and more of a freeform goal-driven kingdom manager where everything happens to get done with Sims that are suited to each task. The game begins by asking you to set a goal for your kingdom. Since this is my first time playing, my only available kingdom ambition is the "Try Not To Burn Everything To The Ground" option. As a proponent of screwing things up I have mixed feelings about this, but proceed anyway.

I'm asked to bestow a name upon my kingdom. Reaching back into my vast knowledge of literature and art, I decide on a somewhat obscure but nonetheless classic reference.

I am presented with a view of the kingdom, a swath of land with a surprising amount of character, but not a lot of buildings. So far. The monarch's castle is unoccupied, so in my first bit of inspired strategic thinking, I decide to create a king to live in that castle. This being Azeroth, the king is Taint Blightly. 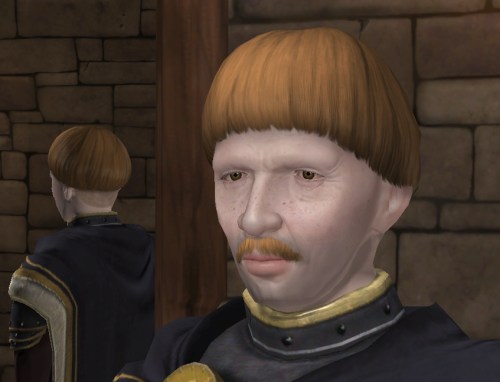 The most agonizing part of character creation is choosing a hairstyle. I need something to complement Blightly's deathly pallor, bad mustache and chinless chin. Sure, a bowl cut adds a certain air of inbred feebleness, but the mini-ponytail atop a partially shaved head is glorious in a "dude in a comic shop / dude watching booth babes at a game convention" sort of way.

In the end, I go with the bowlcut, since finding a steady supply of greasy rubber bands in medieval times seems like a difficult proposition. 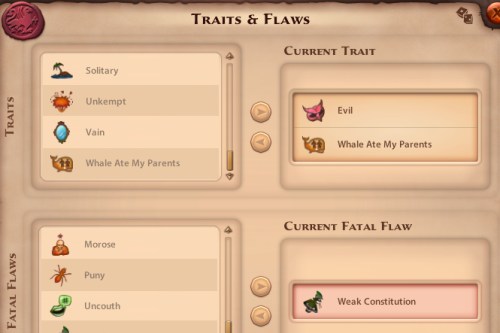 As you might have guessed by looking at him, Taint Blightly is a weakling with a tendency to relish in evil deeds. He is, however, so much more than you give him credit for! For instance, his parents were also eaten by a whale. What are the odds? Even stranger, they were eaten by that whale on different days. Stranger still, Taint was born after they had been eaten. 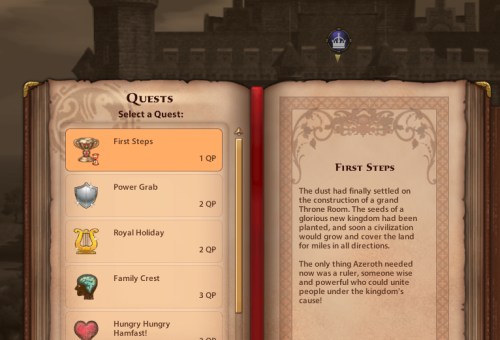 In this game, you don't just pick a Sim (or Hero, as the playable Sims are called this time around) and start goofing around. Instead, you choose a quest while looking at the kingdom overview, then jump into the Hero that will complete that quest. When his or her dark deed is complete, you'll automatically go back to the map to choose another quest or use the points you earned to buy new buildings, which in turn house new Hero classes.

Since Blightly hasn't accomplished anything with his life aside from miraculously evading a slow death at the hands of the common cold, I select the "First Steps" quest. Much like the kingdom ambition I chose, this quest's goal is to sit upon the throne without missing. 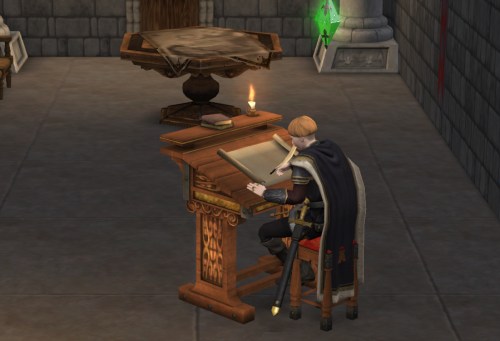 I'm told that the first order of business is to discuss the state of our castle with my Build Master. Instead, I take a moment to attend more pressing matters, drafting an urgently needed law. There. Now it's completely illegal to wipe one's hands on the royal cloak or to make fun of someone for being allergic to hay and stone.

Now to find my Build Master and speak to him about that important issue. 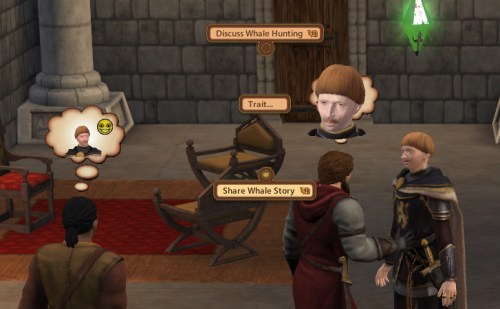 Trembling with emotion and malnutrition, I recount The Whale Story. My Build Master gives me a consoling hug while a nearby royal subject seems inappropriately happy to see me. After I tell The Whale Story three more times, the Build Master rudely interrupts to discuss the state of the throne room. It seems that before we can officially cut the ribbon on this castle and open it to the public, we need to address some terrible oversights in the design of the throne room. Before he can get started on construction, he requires certain resources. He sends me... 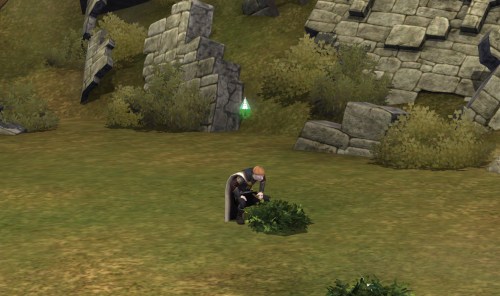 To the woods, to pick flowers, without a guard. After taking a long walk and sticking my hand in a glittering bush, I begin to question the wisdom of this expedition. After all, doesn't a king have people to do this sort of thing for him? Isn't this a terrible mismanagement of time? Don't bears live in flowers? Since I'm here, I gather what I can then head deeper into the forest to gather some wood for my Build Master's project. That's when I have an unexpected encounter. 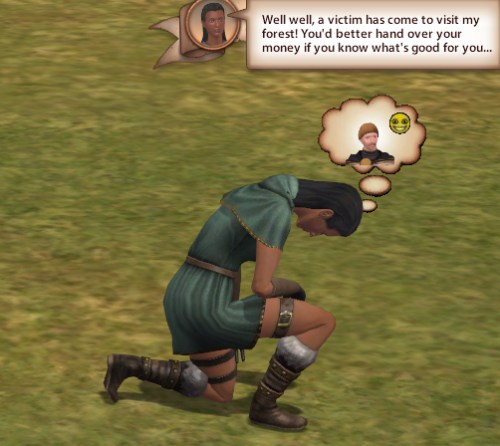 Odd that she's eager to assault me, yet so happy to see me and respectful enough to bow. This kingdom needs some direction! I attempt to recount The Whale Story in exchange for my safe passage, but she'll have none of it. I have no choice but to challenge her to a duel. 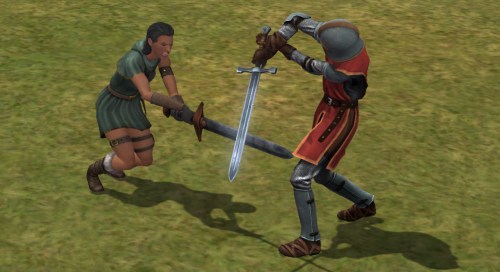 Her being a lowly thug and I a cunning monarch from a long line of nobles, things pretty much play out as you'd expect. 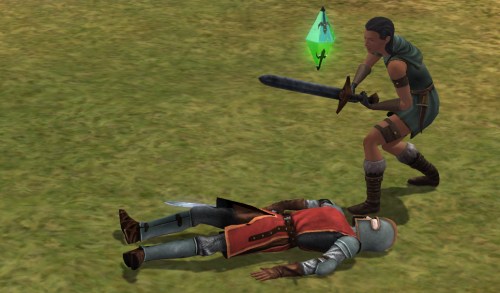 I wake up hours later and am pleased to find that the bandit left my precious wood behind, electing instead to take all of my money and half of my underwear. I head to the graveyard to collect some stones, the last items on my shopping list. More questions come to mind. Isn't this part of the Build Master's job description? Aren't I allergic to stone? 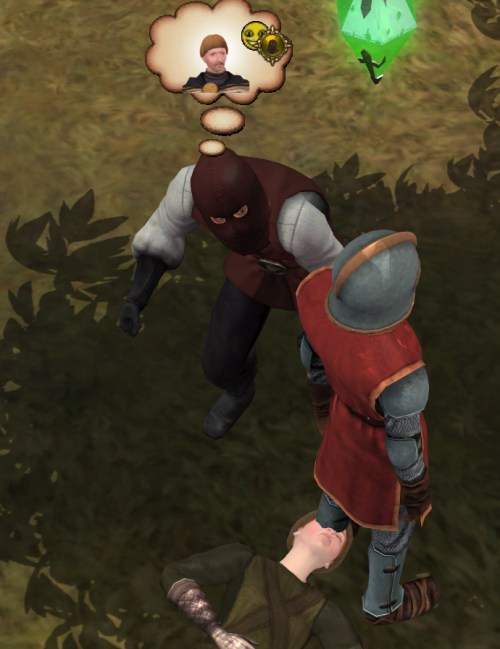 Fortunately, my weary mind is put at ease when I encounter the friendly gravedigger. An excitable fellow, he rocks back and forth and chortles in glee as I step on a dead woman's face. His reaction is so grand that I make a mental note to try this trick in the throne room if I ever fall out of favor with the court. With a polite goodbye, I gather my stones and begin my journey back to the castle.