I bet you nearly forgot buffets existed. I did before this weekend. That's perfectly natural, because like strip clubs and off-track betting parlors buffets are only visible to that certain demographic who will stoop so low as to enter them. The rest of us just ignore them like we do beggars or cries for help from alleyways and go about our normal lives where we aren't the crab-shell husks of people drained of everything vital. 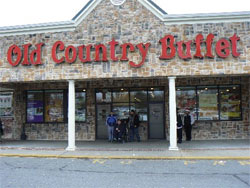 Old Country Buffet. Not pictured: Lost Ark spirits.That pleasant ignorance ended this weekend as I was lured to a buffet by a penny-pinching relative who wanted to "get together" somewhere "relaxed." The discussion of reasonable places to meet was carjacked by this relative and we ended up at the afternoon feeding call of an Old Country Buffet.

Old Country Buffet calls itself "The Best Buffet in America." I'm not really experienced with competing buffets to know if that's accurate. Based on my visit to Old Country Buffet if it is the best then all the other buffets in America are somewhere between a dumpster behind an Outback Steakhouse and an 18th century chamber pot in a malaria hospital. If you go to their Yelp entries it installs a virus on your computer and in the Fodor's book they just have a picture of a skull and crossbones.

When you first enter a buffet you are going to immediately notice that everyone looks different than the outside world. There isn't a gravity anomaly making all these people into giants, this is what happens when your favorite restaurant has fried chicken hot lamps within reach of a sundae bar.

The next thing you might notice is that the tables are covered with trash. I've only experienced a few buffets in my life, but they always were understaffed with bus boys, leading to mounds of napkins and literally stacked plates of second, third, and fourth portions of food. 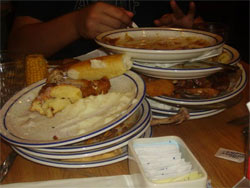 This is considered a clean table at a buffet. You can tell because there are no ants.Aside from the mess, the decor of a buffet is similar to what you might see used for the warehouse of a villain in a 1980s action movie, plus a forest of plastic plants in case you wanted to feel like you were living in a model train diorama.

All of this would be tolerable if the food were delicious, but it is not very delicious at all. During my visit I saw or tasted chicken tenders with the consistency of owl pellets, a corned beef that might have been beefed corn, and what I think might have been a chafing pan full of caterpillars covered in orange marmalade. The buffet was also fully stocked with tacos and taquitos that were seemingly emptied out of somebody's pockets shortly before our arrival.

Old Country Buffet also serves baked goods, like cookies and cakes, in wrapped portions. These all have the same taste and consistency (bad) and might be part of a government program to choke fat people to death with compacted cake smut.