Meditations from a Movable Weiner 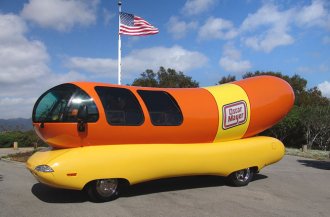 I'm trying to qualify for state disability insurance by pretending to have schizophrenia. I have an evaluation appointment next week that I need to not attend to prove that I suffer from schizophrenic avolition. I'm worried that I might forget to skip the appointment, so I've posted reminders all over my new home: an abandoned Oscar Meyer Weinermobile. It's the first of many abandoned-novelty-vehicles-cum-homes I plan on buying once I get my first disability check (I often feel like a series of real-estate purchases trapped inside a body). It may seem rather outre for a living space, but I like challenging societal norms. For instance, when strangers ask me how I'm doing instead of automatically saying "good" I tell them how I'm actually doing, although the answer is always "good" because I'm glad just to be talking to anyone.

My Weinermobile may also seem small for a residence, but it's actually much bigger on the inside, its oblong cab a vast tunnel stretching seemingly into infinity - it's actually a spatiotemporal wormhole that can send one to any time or place in the universe. Occasionally I have an urge to wander down the tunnel and disappear into the hot-dog-shaped corridors of time, but per my simulated avolition the impulse quickly dies. Something about the wormhole seems to screw up cellular signals, so I don't have phone reception most of the time. To make the most of the rare hours I do have reception, I duct tape two phones to the sides of my head and talk to two people simultaneously. To save even more time, I use a computer program that takes my messages for each party (e.g., "I'm calling about the used Realdoll"/"Happy Mother's Day!"), breaks them down into their core words and phrases, and for each pair of words or phrases finds a word or phrase somewhere in between - for example, black/white = gray, republican/democrat = independent, man/amazing = Nas.

When I can't use the phone, I handle most of my correspondence through the mail. Last week I sent a letter addressed to "the world" saying "Have fun being alive while other people are dying." The next day I got a reply saying "Have fun dying while other people are alive." I know that the NSA agents who read everyone's mail just sent the letter as reverse-psychology to try and cheer me up, but I still found it depressing.

The Weinermobile is haunted by the ghost of a Hotdogger who crashed it in a tragic accident that killed thousands of people. This is more or less the plot of the 1990 film The Sleeping Car, which is probably why the ghost keeps adding it to my Netflix queue. The movie works well as an ambient film while I'm pacing around my room trying to figure out when my life went so horribly wrong. If I can pinpoint the exact moment, I can take a forgetting pill for everything prior to that moment and relieve myself of all the painful joyous memories that make my current life seem so miserable by comparison. I wish there were some way to physically destroy my halcyon days, but until scientists invent a reverse-overdose-of-Tramadol that kills your past instead of your future, erasing their memory is the best I can do.

It'd be great if morbid regret, or other problems I'm intimately familiar with, like owning a lonely heart, and too much booty in the pants, qualified one for disability, but such things are determined by the American Medical Association. Needless to say, I'm not too fond of the AMA; in addition to being a stifling bureaucracy, they also treat the human body like a machine. That's why they advise doctors to try to fix it the same way most laypeople try to fix machines, by turning it off and on repeatedly using a combination of heart-stopping drugs and resuscitation.

Sometimes I get so distraught while pacing that I forget pacing's critical back-and-forth component and end up pacing in one direction. I walk down the tunnel, through countless eons of time, until I end up at the big bang and get atomized instantly. I realize that this isn't a problem most people can relate to, and that knowledge makes me feel sad and distant from the human race - even though my atoms scattered across the universe are literally the building blocks of all life. 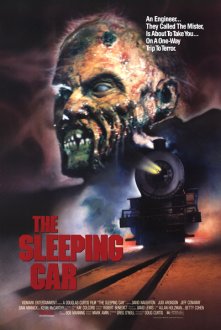 As its title suggests, The Sleeping Car also works well as a sleep aid, at least until the ending. The film's climax is a special effects tour de force that can't be slept through without earplugs and one of those sleep blindfolds. My blindfold says "Tease" on it because I bought it at an S&M shop. Sometimes I forget to take it off and wear it around my neck to my job at Subway. I'm always embarrassed when this happens, if only because it's a tautology - everyone at Subway already teases me.

Sometimes I dream that I'm sitting in the back of the Weinermobile while it careens driverless down the highway. At first I thought this was symbolic of the powerlessness I feel in life, but then I realized it's actually the Weinermobile's dream of being able to drive again. At the end of the dream the Weinermobile reconciles with the ghost driver and they have sex, since the driver is a metrosexual - a person attracted to subway trains, and other train-shaped vehicles.