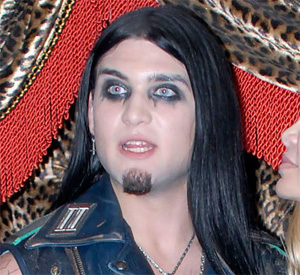 The culture of TV commercials and sitcom TV show bring up the cattle of the world to believe that they can have friends and live a perfect life. This is not possible. Every person is a vampire sucking blood or money or something else out of you. They will smile at you while you are doing it, but soon enough they will show their true Nosferatu face.

For example there was Gloria who was supposed to be my personal fitness trainer. One black day she told me that if I did not stop drinking milkshakes while doing my cardio I would never get healthier. She also told me not to wear my sunglasses and leather duster while doing cardio. I gave her $500 to stop talking because I had a hangover and then she never came to my condo again. I understood then that it was not friendship after all. She only wanted my money.

Also Hellhammer was supposed to pay part of the web design cost for the Eyes of Noctum website and he didn't and now the Shockwave doesn't work. We all voted by Skype that we had to have a web presence better than Myspace and Hellhammer voted for it even though I was against it because Myspace is all we will ever need. But then I had to pay for all the web design. So the band broke up, because the facade fell away when money was involved, and the false friends scurried away like rats in an abattoir of the unholy.

We are all already dead. Time is the only factor. Whether it is war or crashing a supercar, one day you too will be on the heap of history, just another rotting corpse eaten by ravens. This was explained to me by Ghost Rider in a brothel in Hungary. The only way to avoid death is by becoming death itself. Now that Eyes of Noctum is broken up and Cynda would rather hump her yoga teacher than work on our tattoo parlor then my career is decided for me by the loom of fate. I will become a Ghost Rider.

I understood this all too well after surviving the crash of my Lamborghini Reventon in Malibu. I am already on the path.